Owned by the owners of the state's Horseshoe casinos 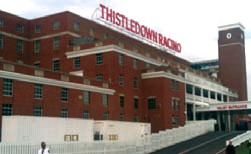 Thistledown Racino held its grand opening on April 9 in North Randall, near Cleveland, Ohio, although live racing won’t begin until April 19. It became the second of the state’s seven racetracks—Scioto Downs was the first—to reopen as a racino, with slot machines. The rest will probably follow next year.

Thistledown racino, with 1,100 video lottery terminals going 24/7, six bars and eateries, is operated by Rock Ohio Caesars, a consortium of Caesars Entertainment and Rock Gaming, which spent $88 million on renovating it. The state will collect 33 percent of the slot revenues.

Thistledown might not stay at its current location. The developer is mulling moving it to the Akron-Canton area. The state says it must decide by June 2014. Cuyahoga County officials have met with Rock Ohio Caesars officials to try to persuade them not to move, and are persuaded that the company is willing to give the current location a fair try.

The Racing Commission has started to assert itself more in the development of racinos. The commission is starting to dig in its heels and require that developers pay more attention to serving the needs of the racing end of the racino. It is demanding hundreds more racing seats per racino as part of an effort to restore the sport.

The commission is the major roadblock to the $125 million racino that Penn National Gaming wants to open in Austintown, near Dayton, and a $175 million facility that Miami Valley Gaming, of which Churchill Downs is a subsidiary, wants to build in Warren County. In March it “asked” the developers to add more seats to their planned facilities. This prompted Penn to say that it would suspend building for six months while it redesigned its plans.