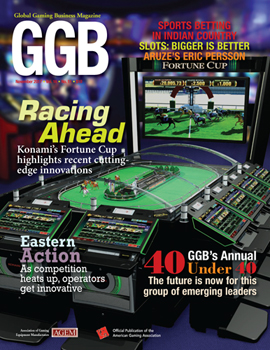 In 1985, Las Vegas casinos first offered a 10-player mechanical horse-racing game called the Sigma Derby. In a time when microprocessor-based slot machines were first appearing, players flocked to the carnival-style throwback, betting quarters on their favorites among miniature horses and riders and cheering as the little figurines made their way around the mechanical track.

The Sigma Derby had a lasting appeal. When the MGM Grand opened its new resort on the Las Vegas Strip in late 1993, Sigma Derby was on the floor.

It’s still there. Along with a unit Downtown at the D, it is one of two Derby games still operating in Las Vegas. With manufacturer Sigma Game, Inc. long gone, the operators have to search for spare parts to keep the games running. But they manage, because of one thing: the Derby games are still wildly popular, with crowds typically gathering around them with buckets of quarters, just like the old days.

The popularity of the Derby was not lost on executives of Las Vegas-based Konami Gaming, which set to work replicating the experience in a modern racing game. Called Fortune Cup, it is now live at the MGM and Venetian in Las Vegas.

If any company could produce a game that captures the old Derby magic, it was Konami. The slot-maker’s parent company, Konami Holdings Corporation of Japan, was a legend in the amusement-game industry long before it produced its first casino slot machine. From Frogger to Metal Gear Solid to Dance Dance Revolution to a variety of pachinko and pachislot games, Konami Gaming’s sister companies have been a a fixture of the amusement industry since the 1970s.

Konami Gaming has always drawn on this amusement expertise for its basic slot games, but it has only been relatively recently that the Las Vegas-based slot supplier’s engineers have worked closely with their counterparts at Konami Amusement Co., Ltd. (which produces arcade and pachinko/ pachislot machines) and Konami Digital Entertainment (the video-game legend) to produce new game-play experiences in products unlike anything else on the slot floor.

“It started with the technology behind Advantage Revolution, a three-reel mechanical slot we developed with a unique rotating bonus reel box,” recalls Steve Sutherland, president and CEO of Konami Gaming, Inc. “This evolved into a much larger scale with the creation of the Titan 360, a three-ton, 10-foot-tall multi-station release brought to market in 2013. Approximately two years ago, the process accelerated as we worked closely with Konami’s amusement groups to bring Fortune Cup, Beat Square and Crystal Cyclone to the North American gaming market, as a key strategy for our business.”

Those three games are now joined by Frogger: Get Hoppin,’ with primary skill-based play replicating the legendary Konami arcade game, as evidence of close cooperation between Konami Gaming and its sister amusement companies.

“This type of product is aimed at expanding the target casino player base to attract non-traditional gamers, while at the same time providing new entertainment options for the core demographic,” Sutherland says. “Today, Frogger: Get Hoppin’ is running live at MGM Grand’s Level Up lounge and remains part of their strategy to offer skill-based game play in a fun arcade-style atmosphere.”

“What we learned from Frogger: Get Hoppin’ has helped lay the foundation for future products like Beat Square,” Sutherland says. “Because of our experience with Frogger, we made a number of enhancements to Beat Square’s overall play experience and functional advantages.”

For Beat Square, Konami again drew on the rich amusement-game history of its sister companies. “We were looking for something to engage multiple demographics across all generations—something that could potentially appeal to younger audiences and today’s core player base,” Sutherland explains.

“A similar Japanese arcade game, called ‘You Beat,’ has a history of tournament play and reaching players of all ages—that is what has evolved into Beat Square for the casino market. There were a number of other products we could have explored, including one of the most popular music tournament programs in Konami’s library, Dance Dance Revolution. Beat Square ultimately rose to the top of the list because it provides the same type of thrill and experience with less strenuous physical effort from the player.”

Similar to Dance Dance Revolution, Beat Square challenges players in a game of rhythmic coordination to tap choreographed square buttons across an elevated dashboard as they light up to the beat of the music, and instead of moving their feet, players use their hands. “It is the industry’s first skill-based game with comprehensive tournament functionality, allowing players to compete individually and in teams,” says Sutherland.

Two other new products have come from collaboration with Konami Amusement and Konami Digital Entertainment. One is Crystal Cyclone, previewed at G2E last year and now readying for market. Crystal Cyclone places player stations around a huge arcade-style center unit that releases balls that land in various prize spots around a roulette-like display.

“AnimaLotta is the name of the Japanese arcade game that has been ‘gamblified’ for the casino space as Crystal Cyclone,” Sutherland explains. “We identified that as a targeted product we wanted to bring to the gaming industry, and the end result looks very similar to what gamers of all ages are playing in Japan.

“It is comprised of eight slant top-games that trigger one of three different mystery bonus events in a center roulette-style ring. During the game’s most anticipated event, the player is awarded a random amount of prize balls, which flood the center ring 10 at a time, each awarding a random credit amount or one of the progressive jackpots for the prize slots where they land.”

Crystal Cyclone and Beat Square are both in line for casino introductions soon, but this fall, the big news for the company in this multi-player genre is the release of what is Konami’s second game to be approved under Nevada’s NIB program—Fortune Cup.

Horse of a Different Color

According to Thomas A. Jingoli, executive vice president and chief commercial officer for Konami Gaming, the company sees Fortune Cup as a way to bring incremental business to the casino floor. “Casino operators are looking for new ways to attract a different demographic onto the slot floor,” Jingoli says.

“As a product category, mechanical horse racing has had a unique history. You can’t overlook the fact that Sigma Derby has been at MGM Grand Las Vegas since the day it opened. It’s also at The D Casino, and on any given night, there’s not a seat open. So it certainly brings another dynamic to the casino floor, and our casino customers look at it as potential incremental revenue for their slot floor.”

Jingoli says Fortune Cup was styled on the Konami amusement arcade horse-race game. “The foundation for bringing a product like Fortune Cup to casinos began more than five years ago; it didn’t happen overnight,” he says. “We remained relatively true to the original—scaled down and right-sized for the casino environment.”

The individual play stations are equipped with touch-screen interfaces and monitors including information like up-to-the-minute stats on horses, and easy ways to make bets that resemble wagers at a real racetrack—place, win and quinellas.

The technology also gives Fortune Cup a capability to fit into a stadium gaming setup, and provides the potential for satellite betting. “For example, guests at the casino bar or lounge could place bets through a satellite and view live video streaming of races,” says Jingoli. “Our customers have expressed a great deal of interest in that technology as well.”

For all the advanced technology, Konami’s engineers also made sure to retain the appeal of the older mechanical race games. “Many of the classic elements remain,” Jingoli says, “including the carrier track that animates the mechanical horses, similar to what has been running in Japanese arcades for 20 years. It has a timeless appeal that generations have enjoyed.”

Other classic elements improve upon legacy casino processors—perhaps most notably, the movement of the horses. “Advanced engineering allows the horses to move flexibly across the track—passing one another, crisscrossing formations, and switching directions with variant speeds,” Jingoli explains. “The digital screens feature real-time coverage of the events, in a sports broadcast format similar to what you would see on television.”

One more improvement is the prize pool. Fortune Cup features a random progressive jackpot chance, with a top award resetting at $20,000. It is another way to generate extra excitement—when the progressive is triggered, the game announces the horse with a chance at the jackpot. If the horse wins the race, players who wagered on it can win a maxi, major or mini jackpot.

“At its core, the game is designed to attract incremental play,” comments Sutherland, “and through its essential nature, we believe Fortune Cup will appeal to a broad audience across the casino marketplace.”

He adds that while it draws on the classic elements that have made horse-race games popular in the past, the multiple technologies are what make Fortune Cup unique. “Product differentiation defines the market strategy behind Fortune Cup,” Sutherland says. “Nothing else like it is available. Other companies have had horse-racing games that have long since left production. We’re introducing the most advanced technology this product category has ever experienced, with the goal of driving new incremental revenue for our casino customers.”

Jingoli says results from the initial Fortune Cup installations at MGM Grand and Venetian show the game is in fact creating incremental play—a more accurate measurement for this type of game, he says, than win per square foot, coin-in or other traditional gauges. “Each is showing success in reaching non-traditional slot player demographics,” he says, “which I find both interesting and encouraging. Slot directors, slot VPs and slot executives are looking to bring diverse players on the floor, and I think this is a product that certainly does that.”

All Hands on Deck

Fortune Cup is the latest success story traceable to the engineering and experience of all arms of Konami Holdings Corporation, but it certainly isn’t the last.

“Drawing elements from the various organizations within Konami Holdings Corporation—Konami Digital Entertainment, Konami Amusement and Konami Gaming—allows us to bring experts in each area together,” says Sutherland.

“We have demonstrated talent in amusement and arcade technology that has endured for decades. Since Konami Gaming was first founded, we have always held close to the proven expertise and resources of our parent company. The foundation of core components such as our electronics, processor boards, graphics and sound have always relied upon world-class internal ingenuity. Our latest creative developments are an exciting continuation of that foundation. With recent market changes, the time is right to open that library for highly creative product unlike anything else available.”

Sutherland calls Konami Gaming Chairman Satoshi Sakamoto a “pivotal player” in the trend to marshal all elements of the parent company for new casino experiences. “Years ago, he recognized that this may be part of the future of the industry, and ensured that Konami Gaming had the appropriate people engaged from Konami’s amusement groups to make it a reality,” Sutherland says. “That collaborative effort has been paramount to our success in this arena.

“For nearly 50 years, Konami has been in business and built a profound legacy in gaming entertainment across diverse platforms and genres. At Konami Gaming, it is the best interest of our company and our customers to leverage that expertise and heritage.”

“This is part of Konami’s legacy and how our company was founded,” says Jingoli. “We were built as an entertainment conglomerate, and it’s something we actively embrace. When you take that to the market—whether it’s the amusement industry, the arcade industry or the casino industry—it’s all about driving entertainment to the player, and that is where our focus lies.”