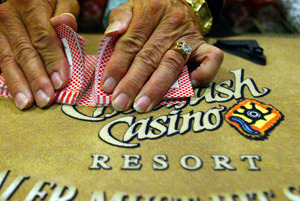 No issue is more volatile in the discussion of American Indian gaming than off-reservation casinos, often lumped with “reservation shopping” as a derogatory reference to the nationwide spread of Indian gambling.

Critics of Indian government casinos would have the public believe there is a dramatic, unchecked and unregulated explosion of tribal casinos in America. They refer to this alleged spurt of Indian gambling off tribal trust lands as “off-reservation” casinos.

This is called reservation shopping.

There is a bit of truth in both observations. But statistics largely refute the magnitude of the separate, though related, trends.

That is six more tribal casinos than there were in 2009, according to NIGC’s figures.

Further, there was an increase of 20 casinos over the 405 operations audited in 2008. That averages out to five new casinos a year, nationwide.

Not much of a growth spurt.

Unfortunately, when it comes to politics, perception is reality. And the poster child for false perceptions of Indian gambling might be Democratic Senator Dianne Feinstein of California, who last year reintroduced legislation to halt “reservation shopping.”

In a fit of hyperbole, Feinstein got up on the floor of the Senate and pronounced, “More than 100 new Las Vegas-style casinos have opened in the state in the last 12 years.”

The remark left more than a few scratching their heads. California has 59 tribes operating 60 casinos.

When Proposition 1A was approved by California voters in 1999, allowing tribes to operate casinos on trust lands, 61 tribes signed regulatory agreements with the state. That figure has grown by 10 in the last 13 years.

To say Feinstein was a bit off the mark in her math is an understatement. She got an “F.”

But the point was made: Look out, Indian casinos are coming.

Contrary to protestations by Feinstein and others, there has been little in the way of growth in the Indian gambling industry.

Yet the controversy over off-reservation gambling is having devastating consequences for tribes.

It has blocked congressional efforts to remedy Carcieri v. Salazar, a 2009 U.S. Supreme Court ruling limiting the ability of the U.S. Department of the Interior to place land in trust for Indian governments.

Moreover, it has exacerbated the growing public perception of tribes not as culturally rich, indigenous governments, but business entities and purveyors of gambling.

“The success of Indian gaming certainly has changed the overall perception of non-Indians that Indians are all poor and dependent on the United States,” says Alexander Skibine, dean of the University of Utah Law School.

Getting The Numbers Right

It’s not difficult to grasp why there has been a leveling-off of new Indian casinos. The market has matured.

Some 247 of 366 federally recognized tribes in the lower 48 states have casinos up and running. The remaining tribes for various reasons have decided not to get into the business, most likely because their rural, if not remote, reservations can’t generate the market.

The Indian Gaming Regulatory Act generally limits casinos to tribes under federal recognition when the law was passed in 1988.

But IGRA’s prohibition exempts tribes seeking lands for casinos off their reservations if they show the project “benefits” the tribe and is not “detrimental” to the local community.

What is regarded as the “two-part determination” exemption in Section 20 of IGRA also requires approval from the governor of the state in which the tribe is located.

Only a handful of tribes have used the two-part determination process to acquire new land for casinos.

The little growth that is occurring in Indian gambling is not being generated by tribes opening new casinos off their existing reservation. It’s not “off-reservation” gambling. Rather, the growth is due to additional IGRA exemptions for:

• restored tribes once terminated by the federal government.

These “equal footing” exemptions do not fall into the two-part determination and do not require a governor’s approval.

There are currently 21 applications with the U.S. Department of the Interior seeking trust lands for casinos. Many of the applications have been languishing for years, if not decades.

Ten of the applications fall into the category of “off-reservation” casinos. Four tribes are seeking trust land contiguous to their reservations and five applications are newly restored tribes. There is also one initial reservation and one land claim.

The list doesn’t forecast much in the way of growth.

The controversy has split tribal governments, many opposed to the spread of casinos for a myriad of reasons, including increased competition and the potential encroachment of new casinos on the ancestral lands of other tribes.

Much of the impact has been in California, with 109 tribes and nearly 80 indigenous groups seeking federal recognition.

Proposition 1A advertising stated that Indian gambling would “only occur on tribal lands,” which was construed to mean largely rural Indian reservations.

“California voters thought they settled the question of reservation shopping in 2000 when Proposition 1A provided that gaming only occurred on Indian lands,” Feinstein told fellow senators in introducing the “Tribal Gaming Eligibility Act.”

“The words ‘on Indian lands’ were critical,” she said. “This made clear that gaming is appropriate only on a tribe’s historical lands, and voters endorsed this bargain with 65 percent of the vote.”

Tribal leaders and policy-makers were caught off guard by shifting Interior Department policy and the growing number of recently federally recognized and restored tribes that have acquired or may soon seek trust land for casinos.

“We didn’t think that kind of expansion would happen,” says Nikki Symington, a tribal consultant who worked on the Prop 1A campaign. “We didn’t anticipate that.”

No one predicted the once-terminated Lytton Band of Pomo Indians and Federated Indians of Graton Rancheria would be restored by the courts (Lytton) and Congress (Graton) and allowed to build casinos on newly acquired trust lands in the San Francisco area.

North Fork and Enterprise rancherias received approval from the Interior Department and Governor Jerry Brown to build casinos on newly acquired trust lands some 40 miles from their reservations.

North Fork is partnered with Station Casinos of Las Vegas and Enterprise is backed by Gerald R. Forsythe, a Chicago industrialist and auto-racing magnate. Gambling critics would put this in the category of reservation shopping.

In addition, Interior last year restored the Tejon Indians of Bakersfield to the list of federally recognized tribes. The Tejons are expected to reward their Las Vegas financial backer, Cannery Resorts, with a partnership in a casino development near the Interstate 5 Grapevine interchange.

Meanwhile, Wappo Indians indigenous to Napa Valley are seeking a court ruling on their request for federal recognition and may also pursue a casino.

Across the border in Arizona, tribes oppose Tohono O’odham’s plans to develop a casino resort in the Phoenix suburb of Glendale, on property the tribe acquired through a federal land claim for acreage lost in the construction of a dam project.

As is the case in California, Arizona tribes claim the Tohono O’odham project would violate a promise made to voters in a 2002 ballot initiative. They told voters there would be no new casinos in the Phoenix area. In addition, two tribes contend the project encroaches on their ancestral lands.

Wisconsin tribes have risen up in protest over Interior’s August approval of an application by the Menominee Indian Tribe to establish a casino in Kenosha, 160 miles south of its upstate reservation. The project needs the governor’s approval.

California tribal leaders complain that Graton, North Fork and Enterprise “leap-frogged” over existing casinos, getting preferable market locations and jeopardizing tribes that “played by the rules” in remaining on their original reservations.

The citizens’ group Stand Up California is seeking signatures for a ballot initiative to reverse legislative approval of the North Fork project.

Funding for the petition drive, wrote the Bakersfield Californian, is “flowing in from gaming tribes that fear the increased competition and from Wall Street investors who have backed existing Indian casinos.”

But the greater concern is the nationwide political, judicial and public backlash created by the perception of massive casino expansion. The fallout has threatened tribal sovereignty and self-governance.

The California Attorney General’s Office has in the past year rejected at least a dozen applications from tribes seeking trust land not just for casinos, but water treatment plants, housing and fire stations.

“That’s what happens when you break your promise with the voters, when you tell the voters, ‘We will keep gambling on tribal lands,’” says lobbyist David Quintana. “These off-reservation projects are jading the people of California against any effort by tribes to take land into trust, absolutely.”

The Carcieri decision stemmed from a lawsuit preventing a Rhode Island tribe from taking land in trust that Governor Donald Carcieri feared would be used for a casino.

The ruling has encumbered Interior’s ability to process land/trust applications, requiring the agency to research whether indigenous governments were “under federal jurisdiction” with passage of the Indian Reorganization Act of 1934.

Nonetheless, Interior under the Obama administration has approved more than 1,000 land/trust applications, placing in trust more than 200,000 acres.

Only 12 of the approvals involved land for casinos. But Feinstein and a handful of senators are steadfast in their opposition to a congressional “fix” to Carcieri, claiming it must be tied to a crackdown on off-reservation gambling.

Elsewhere, Treasury and the Internal Revenue Service are targeting tribes for audits that largely involve social and welfare programs funded with casino revenue.

The federal courts have scuttled the sovereignty doctrine in decisions involving tribal governments.

And labor law exemptions for Indian governments have been stripped away by federal court rulings largely dealing with tribal casinos.

“Members of Congress have made it very clear that is their concern,” said Jacob Coin, executive director of public affairs for the San Manuel Band of Serrano Mission Indians of San Bernardino County, California.

San Manuel is opposing efforts by the Los Coyotes Band of Cahuilla and Capeno Indians to build a casino in Barstow, 100 miles from its San Diego County reservation, claiming the community is on Serrano ancestral lands.

San Manuel supports efforts for a congressional fix to Carcieri that does not require amendments to IGRA off-reservation provisions.

But the tribe believes there also needs to be a congressional fix to off-reservation regulations that allow tribes to encroach on the ancestral lands of other Indian nations.

“We have to be concerned about the impact these off-reservation gaming activities are having on the broader land-into-trust issues,” Coin said. “Absolutely, we need to be.