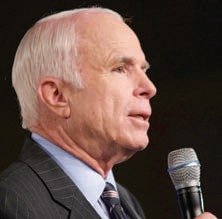 Proponents of legal sports betting in the U.S. picked up a big ally as Republican U.S. Senator John McCain called for congressional hearings on the issue.

McCain, a former candidate for president, said he favors allowing sports betting in any state that allows gambling. He made his remarks in an ESPN/ABC podcast that aired as his home state of Arizona was hosting the Super Bowl, the heaviest betting day in the U.S.

“We need a debate in Congress,” McCain said. “We need to have a talk with the American people and we need to probably have hearings in Congress on the whole issue so we can build consensus.”

McCain said he also favors allowing Indian tribes that run casinos to offer sports betting. But McCain also came out against online gambling and sports betting over the internet.

McCain also addressed Nevada’s exemption under current federal law that allows it to offer a true sports book when he was asked why Nevada should have sports betting and nobody else.

“I think you have an excellent point, and that’s why it is a national issue,” he said. “I think that there is a place for sports gambling in states where gambling is legal.”

McCain’s comments came as the American Gaming Association estimated that $3.8 billion was bet on the Super Bowl game, played this year in Glendale, Arizona.

Geoff Freeman, president of the association, was also interviewed on the podcast, and pointed to those numbers as showing that the country’s current law on sports gambling “is not working.”

Freeman also called for an open debate on sports betting.

“From a casino industry perspective, we’re not sure what the right solution is here. How do we figure this out?” Freeman said. “This is a discussion we are having internally in this industry, and that’s a discussion that needs to happen.”

Sports betting is banned in the U.S. under the 1992 Professional and Amateur Sports Protection Act in all but four states, which were grandfathered for offering forms of sports betting before 1992. However, only Nevada offers a true sports book.