Administration insists it is not blocking a solution 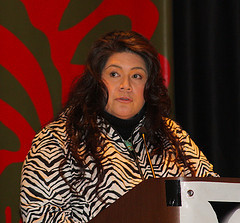 Despite accusations to the contrary, the White House supports a legislative solution that would “fix” the U.S. Supreme Court decision of two years ago that has halted much of Indian Country’s efforts to put land into federal trust, according to a “senior policy adviser” quoted by GamblingCompliance.

Such a bill would reverse the decision, which says that land cannot be put into trust for a tribe recognized after 1934. A bill that would do just that passed the House last December, only to stall in the Senate.

Tribes hope to get a legislative “fix” that doesn’t include any amendments by Senator Diane Feinstein, who wants to make it very difficult to put land that is not near a reservation into federal trust.

Teehee responded that the president cannot control the action of senators. The House bill is expected to be reintroduced in this session and a similar bill will likely be introduced in the Senate as well.

At a meeting of the National Congress of American Indians last month, the chairman of the House Natural Resources Committee complained that he wasn’t getting any cooperation from the Department of the Interior, reported GamblingCompliance.

“Unfortunately, since this has been pending, the department honestly has not been very forthcoming as to what their process has been in all of this time since Carcieri was put in place,” Rep. Doc Hastings (R-Washington) said. “So for us to make whatever decision we make, whatever resolution or whatever way we approach this, we have to have all of the information, and frankly, the department has not been forthcoming in that regard.”

Deputy Secretary of the Interior David Hayes disputed Hastings’ contention that the department was dragging its feet.

“We want a Carcieri fix—a clean Carcieri fix,” said Hayes. “There is not, and never has been, any doubt about that.”