Gaming in the Great White North is different from the industry next door, but the U.S. and Canada have a lot in common - including more competition and a changing customer base. 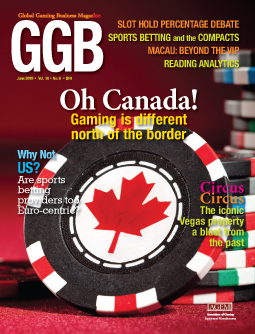 The first lotteries in Canada were introduced nearly five decades ago, and today, gambling is nearly ubiquitous in the country.

An annual study published by the Canadian Gaming Association reports that there are 114 casinos and casino-style facilities with more than 65,000 electronic gaming terminals and 2,000 tables in all provinces except Newfoundland and Labrador. With the exception of British Columbia and Ontario, Canada boasts 4,680 sites with more than 34,000 video lottery terminals.

Countrywide, there are more than 30,000 commercial lottery ticket terminals, and the government has licensed more than 52,000 charities to operate almost 200 permanent bingo halls and facilities.

Designated bingo halls and casinos in British Columbia, Manitoba and Ontario are home to upwards of 12,000 EGTs for bingo games and break-open tickets. Parimutuel or horse racing takes place at roughly 227 racetracks and tele-theaters in all the provinces except Newfoundland and Labrador. Finally, online gaming is readily available in all provinces except Saskatchewan and Alberta.

However, the picture looks vastly different when Canada is compared to its southern neighbor, the United States. In the U.S., gaming operators are regulated by a local gaming commission or lottery association and taxed by the states in which they operate.

The policies that govern Canadian gaming are provincially regulated, with different policies in each of 10 provinces and three territories. In some provinces, casinos are fully owned and operated by the government; in others, they’re government-owned but run by private operators.

Centuries before the first European contact, indigenous peoples of Canada engaged in many forms of gaming, from the ancient “Slahal”––a game played between two teams using sticks or bones—to modern lacrosse. The latter, one of North America’s oldest team sports, has its roots in a game played by native men as early as the 17th century, and was highly modified by European colonizers to its current form.

Commissioned by England, Italian explorer John Cabot arrived on the coast of North America in 1497, bringing with him playing cards and a much more conservative attitude towards gambling, especially the dice games that had been outlawed in Britain.

Canada’s first criminal code upheld that ban, but it didn’t stop organized crime groups from operating illegal wagering activities. The appetite for gambling grew. To crack down on organized crime, the government wrote even more stringent gaming laws into the federal criminal code.

In the late 1960s, however, the code was amended to allow charitable gaming. It enabled provincially regulated lotteries to fund-raise for causes it deemed worthwhile, starting with the 1976 Summer Olympics in Montréal.

Slowly, additional rights were granted that allowed the provinces to operate other gambling facilities and activities, including horse racing and slots. In subsequent years, Canada’s first commercial casino operations opened in Winnipeg in 1989 and Montreal in 1993. The criminal code finally caught up in 1999, repealing that outdated ban on dice games.

Today, gambling is forbidden unless operated and licensed by the federal or provincial governments, with each province or territory deciding how to offer and regulate gaming in its jurisdiction within the constraints of the criminal code. In other ways, the code is more progressive, having advanced online gambling and sports betting more rapidly than in the United States.

In Canada, online gaming has been legal for more than a decade. “In fact, there are only two provinces, Alberta and Saskatchewan, that don’t offer online gaming today,” Burns explains.

Tribes on the Fringe

Even First Nations like the Kahnawake are pioneers in online gaming. “We were one of the first jurisdictions in the world along with Antigua to offer online gaming starting in 1999, even before we opened our land-based gaming facilities,” says Murray Marshall, general counsel for the Kahnawake Gaming Commission, the official licensing and regulating authority in the Mohawk Territory of Kahnawake.

Despite the early start, few Canadian First Nations have gained a profitable foothold in gaming the way many gaming tribes in the U.S. have.

According to the National Indian Gaming Commission, established by Congress after the passage of the Indian Gaming Regulatory Act in 1988, gaming tribes generate annual revenue of $27 billion. In the December issue of the Journal of Law and Social Policy, Dr. Yale Belanger reported that First Nations gaming only yields about C$1 billion (roughly US$747 million) in gross revenue each year.

As First Nations gaming enters its third decade, Marshall attributes the vast discrepancy in scale and profitability to one key difference. “Very simply, Canada’s failure to recognize First Nations’ sovereignty, the kind enjoyed by Native American tribes in the United States, has kept First Nations of Canada on the fringe of the booming gaming industry.”

The U.S. federal government recognizes tribal nations as domestic dependent nations with tribal sovereignty, and the U.S. Constitution establishes the tribes’ authority to self-govern. Through IGRA, the NIGC was established to provide a legislative basis for the operation and regulation of tribal gaming, to protect gaming as a means of generating revenue for the tribes, and to stimulate tribal economic development.

In Canada, no such regulatory framework exists, and the criminal code has effectively prevented most First Nations from capturing a larger share of the country’s multibillion-dollar gambling market.

The Assembly of First Nations, a political organization that represents 900,000 First Nation citizens and 600 First Nation chiefs in Canada, has been lobbying the government to amend Section 207 of the criminal code to allow more First Nation-owned casinos in the country.

Currently, provincial governments are not obligated to negotiate in good faith with First Nations who request permission to start up gaming activities within their jurisdictions, as state governments must in the U.S.

“Given the present limitations of Canadian law, First Nations may ask permission to build and operate new casinos and permission may be denied by the provinces,” says Marshall. “An alternative is for a First Nation to exercise its own inherent jurisdiction over gaming—as the Mohawks of Kahnawake have for the past 23 years.”

Lessons for Canada—and the U.S.

“Gaming revenue generated in Canada helps fund key government services in the provinces, including but not limited to education, health care, economic development projects, and charitable, nonprofit and other community-based organizations,” says the CGA’s Burns.

The association estimates that the multibillion-dollar Canadian gaming market (including public, private and First Nation-operated gaming activity) supports more than 105,000 full-time jobs and adds more than $6 billion each year to fund important government and community programs and services.

In contrast to the U.S., Canada is a small gaming market. In 2010, it generated $5.7 billion in total gaming revenue. In 2013, that number grew to about $7.2 billion. Four years later in 2017, the country saw a nearly 5 percent increase over 2016 to approximately $13.5 billion. This boost was fueled mostly by two provinces: Ontario accounted for 43 percent of the country’s total gaming revenue, and Quebec was the next best performer among the provinces, contributing roughly 21 percent.

Gaming in Canada has followed a decidedly different path compared to the U.S., especially as it relates to First Nation gaming. There is sufficient evidence from the U.S. that tribal gaming projects can rival privately operated gaming establishments, drive competition for the entertainment dollar, and yield significant profits for reinvestment back into the host community and to help fund provincial government and community programs.

Pressure is mounting to amend and modernize the restrictive gaming provisions of the criminal code, and the Canadian government now has the opportunity to create a path to unprecedented economic opportunity and self-determination for many, including but not limited to First Nations.

Advanced in many ways, the U.S. legislative resistance to online gaming has slowed innovation in this space. Online gaming isn’t dangerous or bad or unregulated and unauditable. It is almost a requirement to modernize gaming offerings in order to attract and engage millennial players.

As Adatia notes, “The controls, protections, technology and the best practices are already available and proven in many markets.” Also, delivering online gaming entertainment that consumers want and expect benefits the U.S. by repatriating revenue that would otherwise be wagered offshore and go to those operating outside the jurisdiction.

Canadian casinos face the same concerns as in the U.S. about the aging demographic they attract. “It’s the same thing you see in America. Older, wealthier clients are still the largest casino audience, but we’re seeing a resurgence in table game play led by millennials,” reports Burns.

Modernization plans are already under way at a number of gaming properties. Casino Montréal has opened The Zone, an interactive and immersive new gaming experience for groups seeking a new form of entertainment.

“It’s an opportunity for new players to learn the basics of popular casino games at their own pace while socializing, watching a game live on giant screens and enjoying music and top-notch food and drinks with friends,” says Adatia.

Gateway Casinos, Great Canadian, Hard Rock and Woodbine Entertainment Group are among several private operations that have announced plans or broken ground to upgrade their facilities to appeal to new audiences. The Canadian gaming market is ready for innovative and entertaining new forms of gaming activities, and the time is right now for those seeking investment opportunities.

Why Gaming Matters to First Nations

While the question of First Nations sovereignty remains unsolved, the economic benefit of gaming to the tribes is indisputable.

“For the Mohawk of Kahnawake, whose gaming facilities serve mostly French-speaking players from Montreal and its surrounding areas, gaming has created a strong economic engine to create real self-sufficiency and sustain the people of our nation,” Marshall says.

However, though sovereignty is directly correlated to economic empowerment for indigenous people, more than half of Canada’s 634 First Nations have yet to see gaming’s positive effect on their lives.