A looming recession or a buying opportunity?

Even though there is fear of recession and uncertainty on how Macau will work out given tense U.S.-China relations and numerous political and economic issues, gaming stocks might be attractive.
Recently, two Wall Street analysts have issued research notes that give some context to those who think gaming stocks can rise from here.

Thomas Allen of Morgan Stanley surveyed institutional investors and found that they have been adding gaming stocks, and it is generally considered that institutional investors move the market.
Carlo Santarelli of Deutsche Bank found that gaming stocks are selling at valuations below their historical norms, with several stocks offering big upside if they return to their long-term averages.
Allen noted the second quarter was the third straight of growing institutional investment, including into Boyd Gaming, Gaming & Leisure Properties, MGM Resorts and Wynn Resorts.

What is interesting from our perspective is that these stocks individually and as a group have the look of being defensive plays as investors think about where to park money in a slowing, and perhaps receding, economy.

Consider:
• Stability. There are some immediate uncertainties in Macau, but the market long-term promises to grow for years to come. Meanwhile, their Las Vegas Strip properties enjoy the likelihood of long-term growth. That should provide support for Las Vegas Sands, Wynn and MGM.

Boyd operates in regional markets that aren’t going anywhere. In fact, in a recession, people putting off a multi-thousand-dollar vacation will still seek entertainment, and the local casino can be an affordable Friday night out. So, as a consumer discretionary business, casinos will see a slowdown, but it might not be as severe as the Great Recession, when wealth simply disappeared for millions of Americans.

Boyd also benefits from the growing Las Vegas population in its locals business, which raises the possibility of growing volumes even in a slow economy.

Finally, the gaming real estate investment trusts are landlords. They will collect rents even in a slowdown.

• Low debt ratio. Allen pointed to Las Vegas Sands’ 1.5-to-1 leverage ratio and suggested some of the movement into the stock might be a flight to quality, especially considering its dividend and its growth projects in Singapore and Macau, where LVS targets 20 percent returns on investment.

Of course, these stocks are not the whole story. The Morgan Stanley survey shows institutional investors reduced their stakes slightly in Boyd peer Penn National and GLPI peer MGM Growth Properties. And the report, as Allen noted, is dated, as the data is for the period ended June 30. Plus, investments do fluctuate, and there are lots of reasons for institutions to buy and sell stocks in the near term or to react to likely nonrecurring events. Indeed, the continued weakness of gaming stocks through early September might indicate some reversal of the buying trend.

In his note, Santarelli found many gaming stocks are trading well below their historical valuations based on enterprise value-to-EBITDA and EBITDAR.

Four of his buy-rated stocks, in order—Boyd, Eldorado, IGT and Golden Entertainment—were more than 35 percent below their average valuations since 2016 despite having sound businesses, favorable risk/reward dynamics and healthy outlooks, when Santarelli issued his research note on September 5.
In addition, Wynn and Las Vegas Sands appear oversold, Santarelli said.

On the other side, gaming REITs were selling slightly above their historical price-to-adjusted funds from operations ratios, Santarelli noted. An exception among casino operators is Caesars, which is being bought by Eldorado at a premium to its historical valuation.

The steepest discount to historical valuation is AGS, whose stocked cratered after what Santarelli called one of the most significant negative reactions to lowered guidance that he has seen in some time.

The recent sell-off in gaming stocks is unnerving, but has created opportunities to buy on value, SantarellI said.

Below are upsides to stocks if they regain their average valuations since 2016 or, in the case of AGS, its IPO. This was as of September 4, so the percentages have changed somewhat: 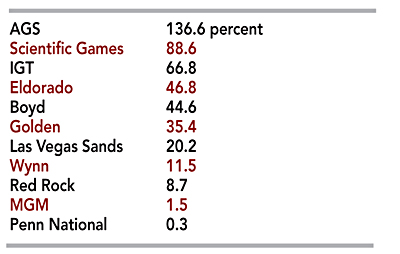 Caesars stock is 17.5 percent above its historical average.

One of the interesting recent trends is Eldorado, which intends to take out costs and build revenues by $500 million in its pending merger with Caesars. Observers who have seen Eldorado’s previous acquisitions think it will achieve that goal and probably surpass it.

If so, the stock could be close to a double from its September 5 price around $39.