A review and discussion of the expectations for the president 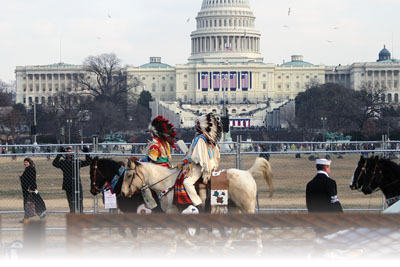 On the steps of the U.S. Capitol at President Barack Obama’s inauguration on January 20, 2009, Reverend Joseph Lowery brought a smile to the new president with a prayerful recitation that included a phrase asking God to help America find a time “when the red man can get ahead, man.” While somewhat tongue-in-cheek, the aspiration reflected a hope that impoverished Native Americans share across the country.

As 2009 comes to a close, the Obama administration can be saluted for the significant progress made this year in resolving longstanding wrongs in Indian Country. These milestones include settling the Cobell v. Salazar class-action litigation concerning trust accounting mismanagement at the Department of the Interior, facilitating over $2 billion in stimulus funds to Indian Country, and granting preliminary federal recognition of the Shinnecock Indian Nation in New York (whose petition process began in the 1970s).

Now is the time for the Obama administration to turn its attention directly to the economic needs of Indian Country and address Indian gaming with steps to foster its growth.

Simply put, Indian gaming works in generating jobs, jobs, and more jobs, along with tribal infrastructure and revenues. The Indian gaming industry has been the most successful economic enterprise in the history of Indian Country. There are more than 237 Indian tribes in 28 states engaged in gaming activities that total over $27 billion in gross annual revenues leading to $84.9 billion in output.

Tribes use their revenues to build their communities, put tribal members and local area residents to work and expand tribal government services. Economic data indicates a tribal gaming facility can create hundreds of direct and indirect jobs within a 10-mile radius of the casino.

Bad Policy
If President Obama and Interior Department Secretary Ken Salazar are to be successful in jump-starting the economy for Indian Country in the midst of one of the worst recessions in history, they need to tune up this valuable economic development engine now.

One step in the right direction is to throw out a bad policy choice made during the Bush administration by eliminating the Department of the Interior’s January 2008 Guidance Memorandum, and to reconsider nearly two dozen tribal projects killed under that flawed policy. Whether approved or not, these proposals deserve a fair review and prompt decision.

The genesis of the Guidance Memorandum began five years ago during the Bush administration. In 2004, the Department of the Interior was criticized for its management and regulatory approach to acquiring land in trust for the benefit of Indian tribes for the purpose of establishing gaming facilities. In the view of some state and local government officials, the department had inadequately addressed the expansion of so-called off-reservation Indian gaming.

While most Indian tribes enjoy the support of their local and adjacent communities, a few members of Congress responded to opposition concerns by introducing legislation to increase local government input; enact a moratorium on gaming-related trust land acquisitions; and, to halt the approval of tribal-state compacts.

Indian Country mobilized, and these proposals were defeated. From a tribal government perspective, however, the department has not done nearly enough to establish gaming facilities on newly acquired land or to assist landless tribes.

In late 2004, two congressional committees began to consider amendments to Section 20 of the Indian Gaming Regulatory Act, which provides exceptions to the general prohibition against acquiring land for gaming. In response, hundreds of tribal leaders descended on Washington, D.C., to dissuade their representatives from amending IGRA and to encourage administration officials to offer an alternative solution to Congress’ varied proposals. One of these was a regulatory fix.

In early 2005, George Skibine, then director of the Bureau of Indian Affairs Office of Indian Gaming Management, announced that he would begin consulting with tribal leaders on draft Section 20 regulations-the implementing regulations to IGRA  (although IGRA was signed by President Ronald Reagan in 1988, no regulations implementing the law had ever been promulgated by the department).

Indian tribes agreed to consult with the department, in part, to quiet legislative attempts to eliminate or restrict Indian gaming on newly acquired land.

By December 2007, the department was in paralysis. It was defending multiple lawsuits alleging violations of the Administrative Procedure Act based on inaction and alleged personal bias against Indian gaming by Secretary Dirk Kempthorne; facing congressional oversight investigations concerning the backlogs of gaming and non-gaming petitions to acquire land in trust; and drowning in an unmanageable number of pending land acquisition applications upon which there was virtually no action. As a result, the enactment of the Section 20 regulations stalled without explanation.

Good Choices
It is against this backdrop that Assistant Secretary-Indian Affairs Carl Artman issued Guidance on Taking Off-Reservation Land into Trust for Gaming Purposes, using a new “commutability” standard, on January 3, 2008. The next day, Artman and Associate Deputy Secretary James Cason employed this new memorandum to deny or significantly delay nearly two dozen applications to acquire off-reservation land in trust. No one outside of the department had seen the policy prior to the final decisions issued January 4, 2008. This obvious and ill-conceived scheme to appease state and local government is the department’s unfortunate legacy. Regrettably, it also chilled the approval process for landless tribes seeking trust land located on their original or restored lands.

The Guidance Memorandum directs the departmental reviewer of a land acquisition application to make a finding of whether the proposed acquisition exceeds “a commutable distance from the reservation.” It suggests that if a job opportunity is not within “commutable distance,” tribal members will be unable to take advantage of the job opportunity or be forced to move away from the reservation. The new policy seemed to be “Keep the Red Man on the Rez, Man.”

The other criterion concerns the secretary’s requirement to provide greater weight to local concerns. In summary, under the Guidance Memorandum, an application to acquire land into trust beyond a reasonable commutable distance from the reservation will be denied because it is perceived to be too difficult for tribal members to work at the new casino and still participate in their community and too burdensome for a government to exercise control over its instrumentality from a distance.

This is a bad policy for President Obama and Secretary Salazar to let stand-especially when compared to an analogous situation. Take, for example, the number of congressmen who travel to Washington, D.C., every week from as far away as California, Alaska and Hawaii. No one would ever suggest that these public servants.

Some of these members return home every week to spend the weekend with their families and effectively contribute to their communities. Would anyone dare tell former Senator Barack Obama that his 700-mile commute between Chicago and Washington, D.C., each week made him unable to take advantage of the job opportunity of being a U.S. senator without moving to Washington?

No, but under the stay-at-home policy of the Guidance Memorandum, no member traveling from outside of Virginia or Maryland could fully participate in Congress and still benefit their constituencies and communities.
Likewise, it is the audacity of paternalism to suggest that a tribal government cannot efficiently participate and exercise its regulatory powers over another tribal location. This restriction falls flat when placed in another context.

The federal government has offices and bureaus across the United States. Would anyone suggest that Secretary Salazar has no ability to exercise governmental authority over the Bureau of Indian Affairs regional offices 3,000 miles away in Oregon or California? In fact, the history of the Bureau of Indian Affairs has always been about a governmental entity exercising authority over and participating with its domestic dependent tribal governmental entities in the far reaches of the country.

In the final analysis, the Guidance Memorandum does not stand for balancing the negative impacts on the reservation against the benefits of a distant gaming facility. Rather, the Guidance Memorandum is designed to keep the tribal members on the reservation. For this reason alone, it must be withdrawn, and the negatively affected Indian tribes need to have their proposals reconsidered.

As the Obama administration works to address unemployment rates of 50 percent-80 percent in Indian Country, reversal of the “commutable distance” theory is critical, but only one solution.

In 2008, it has been estimated that Indian gaming helped create over 712,000 jobs, but quoting Skibine, current acting chairman of the National Indian Gaming Commission, the Obama administration continues to put the “brakes on gaming” decisions. The brakes have been placed on draft and final environmental impact statements for gaming projects, restored lands opinions, numerous two-part determinations (some of which are opposed by tribes) and conceptualizing its response to the Supreme Court’s decision in Carcieri v. Salazar.

While some latitude is understandable for any new administration staffing its political appointees, the patience of Indian Country and particularly landless tribes seeking gaming opportunities is wearing thin as the department formulates the Obama administration gaming policy.

Artman testified before the Congress defending the Guidance Memorandum, that the “department favors tribal economic development and has many initiatives to promote and support tribes as they address the high unemployment and poverty rates found on many reservations.”

If that is the case, where are those jobs, jobs, jobs? To date, Assistant Secretary Larry EchoHawk has stated similar goals in Indian Country, but it’s time to act to create those jobs.

Will there be new gaming opportunities under the Obama administration or not?  Indian Country waits.