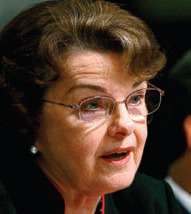 The Mishewal Wappo tribe has sued the Interior Department to try to obtain federal recognition, which it lost more than 60 years ago. Currently the tribe and the department are negotiating over the suit. Gaining federal recognition would be a first step towards putting land into federal trust, a requirement for building a casino. However, tribal Chairman Scott Gabaldon has previously said that the tribe isn’t interested in building a casino.

The senator’s letter says that if the department recognizes the tribe it should stipulate that the land should be restricted so a casino could only be put in with a positive vote of the county’s electorate. Gabaldon counters that this requirement would impinge on the tribe’s sovereignty.

Feinstein wrote Salazar, “While I support the department’s efforts to restore sovereignty to de-recognized tribes, it is deeply concerning to me that the re-recognition process has become so closely intertwined with the development of new casinos in California.” She added, “Napa Valley is a unique and cherished landmark for the people of California and wine-lovers worldwide. To protect these valuable resources, Napa County residents approved the Napa Valley Agriculture Preserve in 1968. Under the terms of the ordinance, all non-agricultural development is strictly forbidden unless approved by popular vote.”