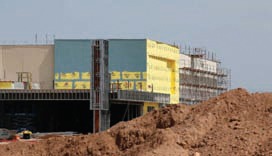 The Arizona Department of Gaming has refused to certify the Tohono O’odham Nation’s 0 million Glendale casino, which is due to open later this year.

This caused the tribe to file suit against the state on June 22.

Arizona claims that the tribe committed fraud when it negotiated its tribal state gaming compact in 2002, because it did not disclose that it had purchased land next to Glendale, and that it intended to open a casino there.

The tribe has so far taken on and bested all comers in the court arena, and courts have ruled that there is no evidence that it agreed not to build a casino in the West Valley when it negotiated its compact.

The controversy can be traced back to 1960, when the U.S. Army Corps of Engineers built the Painted Rock Dam on the Gila River, eventually inundating the Tohonos’ reservation, about 10,000 acres.

In 1986, Congress authorized buying the inundated land for $30 million, which it was authorized to spend on an alternative reservation. Two years later, Congress adopted the Indian Gaming Regulatory Act.

In 2002, Arizona voters approved the tribal gaming compact between the state and all of its gaming tribes. A year later, an LLC created by the tribe began buying land next to Glendale for the tribe. In 2009, the tribe announced its intention to build a casino resort on the land.

In 2010, the Bureau of Indian Affairs put the land into trust. That same year, the Gila River Indian Community and the city of Glendale sued the Department of the Interior, claiming that it didn’t taken into account whether the land, surrounded by a city, was suitable for a casino. The tribe won a series of court challenges against its right to build. In 2012, the first attempt at a congressional solution occurred with the passage of a bill sponsored by Rep. Trent Franks that would prevent the casino from operating.

This same bill is now very much alive in the House, and is being pushed in the Senate by Senator John McCain.

In July 2014, the Bureau of Indian Affairs reaffirmed its earlier decision that putting the 54 acres into trust was proper.