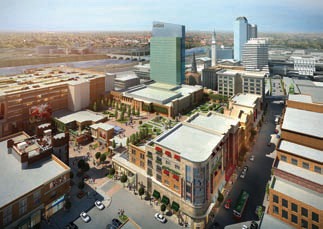 The long road to awarding a casino license in Massachusetts is over—at least for the western region, where MGM Resorts International was the only applicant left standing.

The other two regions of the state will be much more difficult to sort out. The Boston-area license features a bitter competition between Wynn Resorts and the Mohegan Sun/Suffolk Downs partnership. The southeastern region, which was reserved for a tribal casino, has been tied up in state and federal litigation and increased competition.

But MGM Resorts will be the first full casino license holder (Penn National Gaming got the nod for the sole slot parlor at the Plainridge Racetrack in Plainville). The process for MGM began two years ago, and included many hearings, long deliberations and extensive investigations. The original field of five contenders was whittled down by several factors, including local referendums where the towns declined to become a host city to a casino.

“This is a great day for Springfield, the commonwealth of Massachusetts and MGM,” said Jim Murren, chairman and CEO of MGM Resorts. “We’re proud of what our talented team and our many dedicated city and community partners have accomplished together.”

The project includes a 25-story, 250-room hotel with world-class amenities including a spa, pool and roof deck; 125,000 square feet of gaming space with 3,000 slot machines, 75 gaming tables, a poker room and high limit VIP gambling area; about 55,000 square feet of retail and restaurant space that will accommodate 15 shops and restaurants; and a multi-level parking garage. The project is seen as a catalyst to the revitalization of Springfield that envisions a high-energy dining, retail and entertainment district with an eight-screen cinema, a bowling alley and an outdoor stage.

Springfield was the most hotly contested of all of the cities where a casino was proposed. At one time the city was targeted by Penn National Gaming and Ameristar at the same time that Hard Rock International wooed neighboring West Springfield, where voters decided against host-city status.

MGM and the other remaining applicants are concerned, however, about the possibility of the anti-casino initiative qualifying for the November ballot. It has asked the commission to consider issuing a provisional license and not requiring it to pay the $185 million license fee until after the ballot measure’s fate is decided. The commission has asked the legislature to address this issue by amending the gaming expansion law to provide for refunding applicants’ fees if the law is repealed.