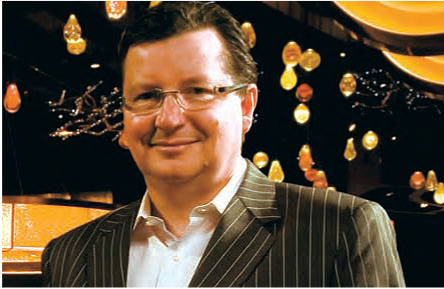 Nigel Morrison took over as CEO of SkyCity Entertainment Group in March 2008. Coming from Galaxy Entertainment in Macau, where he had been filling the CFO post, Morrison gave himself 12 to 18 months to get SkyCity performing as he believed it could. When the 2009 results were released recently, SkyCity showed net profit on an underlying basis up 13 percent, to NZ5.3 million (US.2 million) in the fiscal year ended June 30. Not bad for a year that saw the world teetering on economic collapse. He spoke by phone with Global Gaming Business European Editor Rich Geller in August. To read the text of the full interview, visit www.ggbmagazine.com.

In 2009 we focused on investing in human capital, on technology and systems, on products and customer service. We’ve significantly strengthened our balance sheet. We raised NZ$228 million in April this year and repaid over NZ$300 million of debt, reducing our overall debt to about NZ$680 million. So we’re pretty pleased with where we’re at. We had a very sound result in the second half and we’ve got some momentum moving, and I think we’ve got a very sound financial base with our restructured balance sheet, our enhanced equity position and our reduced debt. I think we’ve got a pretty solid platform for future growth.

Did your results mirror the economic situation in your region, or did you surpass results for the region?
We’ve probably surpassed results, certainly growth results in our region. Our peers are really Crown and Tabcorp, which are the other two listed companies which operate casinos in this part of the world. I think the big turnarounds we’ve had, particularly in Adelaide, and the growth we’ve had in Darwin, fare very well compared to our peers.

Adelaide’s been very much a turnaround story for us. It was a property that we’d formed the view was not being run very well, and we made a lot of changes to it. We increased its attractiveness, increased visitation, increased spend, and were able to increase our earnings from that business.

I think it would be fair to say, in Australia, our casinos have outperformed our peers. On the back of this announcement and our results, our share prices rallied by about 25 percent, so I think that says that we did outperform market expectations.

Can you name some things that you did specifically, say in the Adelaide casino, to accomplish this?
One of the first things we did was we reinvested in management. We’ve appointed a new general manager and a new team to run that business-staff with really good pedigrees in table games and slot management. We picked some of the better people out of the industry and set a business plan, and they worked to it. We re-laid out the gaming floor, created some zones and rooms on the gaming floor, introduced a baccarat room, put more technology into the table games, really focused on our customer service, introduced some new, automated table games-and they’ve done very well for us.

Nothing that I’d say was rocket science, but more back to basics and improving things that weren’t being done particularly well. Just really focusing on cleanliness and presentation, customer service, attentiveness, player loyalty programs, great value food and good value bars, the overall entertainment offering, the music, the ambience, the temperature, the lighting, getting all those things right. And some reasonably innovative and creative marketing and a re-launch of the property to the community.

Turning around a workforce’s mentality is tough. Did you have to make many changes in personnel?
Of the top 10 people who are running that business, about six of them would be new in Adelaide. We have really focused on people who know how to manage people, who are on the floor more and working with their teams of people, knowing their people and making clear what we expect of those people and really trying to instill a performance culture. It’s fair to say that was lacking previously. There’s always a long way to go with these things. I think we’ve improved our communication-I’m a great believer that communication is 90 percent of the answer with all these things, in terms of communicating with staff, listening to what they’ve got to say and making sure you address the issues they have.

We’ve been doing a lot of that and I think that has helped move the employee engagement and advocacy forward for the organization, leading to better customer service.

The economic conditions in your region now, moving forward, are they improving? Are there any dangers lurking?
It’s probably fair to say that the view for Australia and New Zealand is that the economic cycle has bottomed. It’s now a question of when is it going to come out and how will it come out. Will it be rapid, will it come out in the next six months or will it be 18 months away? There have been some green shoots recently and everybody’s been seeing green shoots on the horizon and thinking we’re about to come out of it.

At the end of the day, my personal view is that it’s U.S. confidence and U.S. consumption that will actually be the real determinant of how Australia and New Zealand come out of this cycle. Until things are getting a lot better in the U.S., which then flows through to manufacturing demand out of China, which then looks to Australia and New Zealand for support, until that loop picks up again, it’s really hard to see Australia and New Zealand really coming out of this in any significant way. But I think we’ve certainly bottomed out and we’ll hopefully return to some very live, modest growth over 2010. And we’d be hoping by then that the U.S. is moving forward, and we’ll get back a little bit on the growth curve that we had in the previous five years.

Besides focusing on your existing assets and core businesses, is there anything further out on the horizon you’re looking at?
We certainly want to realize the potential of all the licenses that we have. We think there’s still a lot more potential we can develop with our Adelaide business, our Auckland business and in Darwin. We own 50 percent of the casino in Christchurch, which is New Zealand’s second biggest city, and we’d like to acquire the other half of that; we think we could run that better and make that a better investment. If we can do all those things, with our newly restructured balance sheet, I think that would make us a pretty strong and successful company.

Having said that, if something was to happen with Tabcorp, and some of the casinos in Australia were to become available, we’d be very interested in looking at those. We’re probably not at the point of looking at anything in the U.S. or Asia or Macau at this point, but certainly we want to understand what’s happening in those parts of the world, and we’ll see where we go in the future.