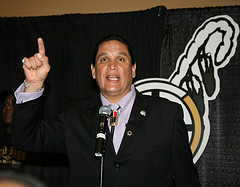 @font-face { font-family: “Geneva”; }p.MsoNormal, li.MsoNormal, div.MsoNormal { margin: 0in 0in 0.0001pt; font-size: 12pt; font-family: Geneva; }div.Section1 { page: SectionIndian Gaming ’11, the annual trade show and meeting of the National Indian Gaming Association, was held last month in Phoenix, bringing in thousands of Native Americans and vendors from around the world. While a typical trade show and conference on the surface, politics were bubbling underneath as the election for the chairman of NIGA loomed on day two of the show.

The battle had been started at the conference of the California Nations Indian Gaming Association in January in Palm Springs, when NIGA Chairman Ernie Stevens Jr. claimed he was ambushed by supporters of challenger Ivan Makil, the former president of the Salt River Pima-Maricopa Indian Community in Arizona. A somewhat contentious question-and-answer session at the conference raised the level of competition.

Stevens was campaigning for his sixth term as chairman, and ran on his record. His most powerful evidence was based on that record: “We’ve never lost an anti-Indian gaming bill during my term,” he repeated three times.

Makil stressed his communication skills and urged a program of consensus-building—something Stevens said he had already accomplished. But Makil said tribes need to do a better job of getting their story out to the American people, demonstrating that gaming is just a small part of Indian Country.

In a roll call of NIGA members—many of which rejoined the organization just hours before in order to vote—tribal representatives were called up to cast their ballots. When the dust cleared, Stevens had triumphed by a total that shocked observers, 121-14.

For Stevens, it was validation that the direction he’s taken NIGA is accepted by tribal leadership. In his campaign speech, he continually deflected credit from himself to the board members of NIGA, who, Stevens said, provide the leadership and consensus that makes the organization successful.

If NIGA as an organization is successful, the same can’t be said for the trade show. Although no figures were released by press time, exhibitors claimed attendance was lighter than usual at a show with a history of low numbers. Some exhibitors cited policies that did not encourage attendance, such as refusing to offer free passes to the show to clients of the exhibitors.

Marcus Prater, the executive director of the Association of Gaming Equipment Manufacturers, which includes most of the major exhibitors at NIGA, says his organization wants improvements in the policies of show management.

“Attendance seemed a little light, and charging buyers hundreds of dollars to walk the floor clearly is not a model embraced by other established gaming shows and one that the suppliers who exhibit at NIGA are not exactly crazy about,” said Prater.

Nonetheless, exhibitors were rolling out their best new products for NIGA.

Aristocrat brought out several new and recently released titles in their games mix, such as Mega Pay, Cashman Fever and the newest Aristocrat slot here, Stuntman Sam. The company continued its rollout of machines designed by the “rock star of the art world” Michael Godard. The latest machine in the series is called Monster Boogie, which features mad scientists and disco music. And Win Your Way is an entirely new game category and introduces a unique style of play that puts more control in players’ hands. Players can choose one of three volatility levels: low (green), medium (yellow), or high (red). Players can easily identify their choice through user-friendly buttons and on-screen images.

“The components for player engagement have evolved with technology, and today’s players demand a more entertaining gaming experience for their time and spend on the casino floor,” says Steve Walther, vice president of marketing for Aruze Gaming America.

FutureLogic presented the PromoNet Promotional Couponing Solution and the recently introduced GEN3 Evolution ticket printer. The PromoNet solution, which can be integrated with both the GEN3 Evolution printer and GEN2 Universal printer, offers the unique ability to create campaigns for both carded and non-carded players, helping casinos boost club membership. The new GEN3 Evolution printer was specifically designed with promotional couponing in mind, offering an optional on-board promotional system module to create separate and secure processing environments for both TITO and promotional couponing.

IGT brought games that elevated existing platforms, like the Sex and the City Big Diamonds games. The base games begin with four unique game interfaces, each themed to one of the show’s leading ladies. Game play includes a random feature presented by Mr. Big, where he awards wilds with a shower of diamonds over the active game reels.

The Pinball MultiPLAY game, which offers the interactive excitement of pulling the plunger to launch pinballs and win awards, was also a popular game.

The recently revamped NEWave brought its innovative ideas to NIGA.

“NEWave is built on an idea: we’ll do all those cage, compliance and audit functions that make most people pull their hair out,” said NEWave Chief Executive and Technology Officer Bart Lewin. “We have a growing team of experts who love these types of things, and our software helps to make our clients’ lives easier.”

In addition to its extensive line of cage, compliance, document management and audit software products, NEWave rolled out its newly formed Professional Services division. Led by recognized industry expert Claudia Winkler, the division provides a full range of IT services to casinos big and small.

The tradition of introducing celebrities at NIGA continued, with appearances in support of Native American causes by actor Danny Glover, who supported native health initiatives; basketball great Julius “Dr. J” Erving, who has partnered with Native American entrepreneurs; and actor Adam Beach, the most successful native actor, who will soon be appearing in Cowboys and Aliens, also starring Harrison Ford.