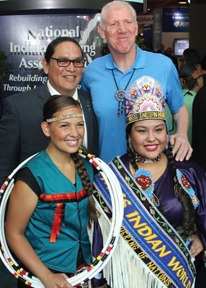 The Indian Gaming tradeshow became part of the National Indian Gaming Association’s 30-year history early on, but the one held last month in San Diego was like no other.

The anniversary marked a significant change in policy for the trade show, which permitted exhibitors to give unlimited free tickets to the exhibit floor, resulting in a big uptick in attendance. And a revamped conference program brought education and information to a tribal community that always soaks it up.

The week began with the traditional three golf tournaments at courses owned by area tribes. The Chairman’s and Vice-Chairman’s Tournaments were held at the Sycuan Band of the Kumeyaay Nation’s Sycuan Golf Resort. The Sovereignty Tournament took place at the Barona Band of Mission Indian’s Barona Creek Golf Club. The day also featured a full conference program, and concluded with a welcome reception around the pool at the Manchester Hyatt.

Tuesday featured another full day of conference sessions, again with record attendance. A cultural reception wrapped up the day, where the Tim Wapato Sovereign Warrior Award was presented to Melanie Benjamin, chief executive of Mille Lacs Band of Ojibwe. The award is an honor given by NIGA to someone carrying on Wapato’s message of determination and powerful advocacy.

Wapato was a former executive director of NIGA and had an illustrious career from being a Los Angeles Police detective to his work with his own tribe in Colville, Washington, to his powerful presence in Washington, D.C. As she accepted her award, Benjamin thanked NIGA and the Wapato family and said, “I’m deeply honored to receive this award in the name of one of our greatest modern-day warriors, Tim Wapato. This award being on cultural night makes it even more special for me because of the connection between culture and tribal sovereignty.”

At the NIGA Membership Meeting held that day, the NIGA board of directors held its elections for the NIGA chairman and secretary positions, where current Chairman Ernie Stevens and Secretary Paulette Jordan were elected uncontested. John Echohawk did the honors of swearing in Stevens, who accepted the position and reminisced of carrying the weight of Indian Country on his shoulder as a boxer, and how he’s proud to be doing so now in his eighth consecutive term as the NIGA chairman, spanning the past 15 years.

The first day of the trade show itself kicked off with an address by the Interior Department’s Assistant Secretary for Indian Affairs Kevin Washburn, who explained what his agency has accomplished over the first six years of the Obama administration and what they hope to accomplish going forward.

After the trade show floor closed, Stevens called it one of the most successful shows of his tenure.