A growing list of sports teams have announced agreements to open sportsbooks in arenas. 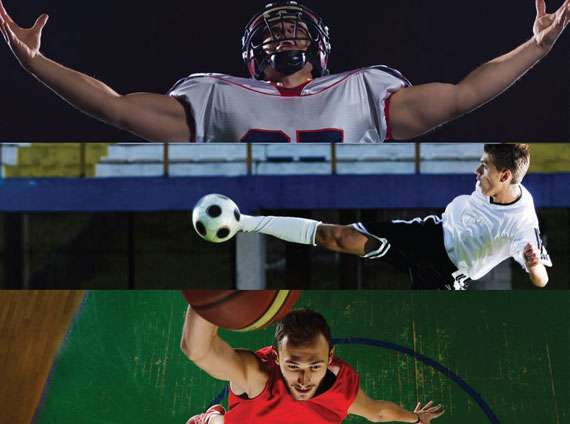 The Cubs are down 8-0 to the Giants in the 7th inning. Getting out of Wrigley at the end of the game is an experience in gridlock. So, you gather the whining kiddies and high-tail it out to beat the

traffic. It’s a scenario that plays out in stadiums throughout the country.

Arenas, too. The exodus means fewer peanuts and Cracker Jack sold, and not as many souvenirs. And fewer butts in the seats if the Cubbies stage an unlikely comeback.

Just suppose that adjacent to the stadium sits a sportsbook where you can make in-game bets, including whether the home team ties the score. Or whether Ian Happ goes yard in his last at-bat.

That day isn’t here yet at Wrigley, but DraftKings expects to open a retail sportsbook along Sheffield Avenue at the iconic ballpark in time for the 2022 season.

DraftKings is opportunistic when it comes to expanding its sportsbook presence, says Chief Business Officer Ezra Kucharz. Not only will the company open a location at historic Wrigley Field, but also at the TPC Scottsdale golf courses in Arizona.

“Some sports fans want to congregate and sweat out the action with their friends. At DraftKings we believe life’s more fun with skin in the game,” Kucharz says.

Sportsbooks at sports venues offer all that and more, he says. “It’s a completely immersive experience with odds boards, scrolling tickers that provide up-to-the-minute player stats and news, plus betting kiosks and top-notch dining service.”

Increasing fan engagement and all the benefits that entails—more peanuts and Cracker Jack sold—is just one positive of having a sportsbook in your favorite ballpark or arena. These positives speak to why sportsbooks have found a home in an increasing number of venues, ever since William Hill, since purchased by Caesars, opened the first sportsbook in the Capital One Arena in D.C. in May.

The Caesars Sportsbook at Capital One Arena is so far the only venture of its kind. Both the NBA’s Wizards and the NHL’s Capitals play at the arena. A temporary, pop-up version received over 113,000 bets that totaled $12.2 million in September 2020 alone, according to Legal Sports Report. 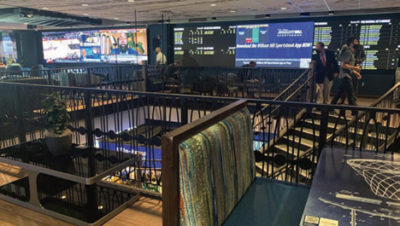 The Caesars Sportsbook at Capital One Arena is so far the only venture of its kind. Both the NBA’s Wizards and the NHL’s Capitals play at the arena

“In partnership with Monumental Sports and Entertainment—owners of the arena and the two teams—we believe the in-arena sportsbook provides the best experience for sports fans and signifies a new era in sports betting, bringing our customers closer to the action,” says David Grolman, senior vice president of operations for Caesars Sportsbook. “Our mobile betting app is tethered to the retail space, so any user within a two-block radius of the sportsbook (including in the arena and for live in-game betting) can bet on games from the convenience of their mobile device.”

The space has direct access to the arena so fans can visit before, during or after games, and anytime in between. The sportsbook boasts a full-service restaurant, too.

“Our vision was to create a hospitality and entertainment destination to be enjoyed by all, locals and visitors alike,” Grolman says. “A dynamic food and beverage menu curated by Michelin-starred Chef Nicholas Stefanelli, wall-to-wall TVs, and a prime location have all made it a popular place to meet with friends, watch games, and entertain guests year-round, not just on game days.”

And the NBA has no issues—as long as the sportsbook adheres to certain rules and gets the league’s permission.

According to the NBA, a duly licensed brick-and-mortar sportsbook may be operated within a team arena by a third party pursuant to an agreement that has been pre-approved by the NBA. An NBA-approved sportsbook must be located within an area of the arena that is separated from all arena common areas and accessible solely by attendees who are legally able to gamble under all applicable state and local laws, says NBA spokesman Kyle Van Fechtmann.

At the outset, the NFL banned kiosks and betting windows in stadiums.

While the ban remains in place, the Arizona Cardinals announced a partnership with BetMGM with plans for a retail sportsbook at State Farm Stadium as soon as 2022. It will not be inside the stadium, but on a tract adjacent to the complex, according to the Washington Post.

The atmosphere at most professional sports arenas like the Capital One Arena is electrifying, says Matteo Carli, IGT PlaySports senior vice president. “Installing sports betting opportunities enhances that excitement among fans,” he says.

For IGT, the move opens up the opportunity to utilize its PlaySports technology and hardware, he says. “PlaySports produces data that customers can use to tailor their offering to players, ultimately strengthening the operator-player relationship. We’ve recently extended our PlaySports partnership with FanDuel Group to additional states, including Arizona at the Footprint Center, where the Phoenix Suns play. We expect to see many more stadiums and arenas,” Carli says.

Sports arena operators can also benefit from adding IGT’s PlaySports Pad, which can be tethered to a range of surfaces such as a bar or tabletop to bring sports betting directly to players, he says.

“It’s also great for teams because it provides a well-funded and built-in sponsor, and it keeps people more interested,” Wyman says. “Mostly, they stimulate that most pregnant of all potential: in-game betting as the action unfolds. It’s also worth noting that these sportsbooks may be operational year round, giving the stadium/arena opportunities to sell food and beverage, merchandise, and tickets even on days without games.”

What about the aforementioned whining children? Won’t exposure to putting a wager on Ian Happ leave its mark, especially teenagers?

“First, I think the industry works really hard to keep problem gamblers and underage gamblers away from betting, and I think there will generally be very controlled access to sportsbooks and lounges, so I don’t see the presence of kids in the stadium as problematic at all.”

It’s crucial that management oversees the entry to the sportsbooks by making sure to card everyone, Klein says. “The worst possible thing would be for widespread underage gambling to take place and cause scandal that would bruise the image of the arena and the team and throw a shadow on the ability to conduct safe sports betting in an arena setting.”

“I think about it this way: sporting events have long offered adults ways to enhance their experience in ways inaccessible to kids. We don’t think twice about the beer vendor yelling ‘Beer here!’ in the stands full of kids, or about whether kids should be welcome at racetracks,” Wyman says.

Keeping underage gamblers away from the betting windows is just one potential fly in the ointment, and not a very big one. But as Wyman points out, betting in a sportsbook in a stadium or arena takes revenue away from casinos. “Every dollar bet on a sportsbook in Nationals Park means a dollar not spent on a mobile sportsbook or one inside a casino. The loss of money in casino sportsbooks also means a possible loss of ancillary gambling. States should consider the impact this might have on their gaming tax revenue,” he says.

Another potential drawback: if arena sportsbooks are legalized in states where mobile wagering outside the arena is either limited or banned, it restricts revenue potential, Klein says.

That said, there are numerous ways to judge success of stadium/arena sportsbooks. Ticket sales and handle will be two measures, Wyman says.

Also, sign-ups for the apps from sports fans in attendance, Klein says.

“Then there’s the revenue generated by each game, concert or event and the marketing push behind the facility to stimulate other things like food and beverage sales, merchandise and such,” he says.

Wyman agrees. “But I also think teams should look hard at some really important secondary metrics: the rate at which fans leave the stadium during/after the game, (partial) season ticket sales, and responses to customer satisfaction surveys.”

Caesars is pleased with the results at Capital One Arena. “We look forward to building on the success of our first in-arena sportsbook with another concept to be opened in 2022, the Caesars Sportsbook at Chase Field, home of the Arizona Diamondbacks,” Grolman says.

Says Wyman, “At the end of the day, I firmly believe they’ll see a jump in revenues and bolstered fan engagement across the board, and on top of that I think they’ll be expanding their reach and attracting new audiences.”