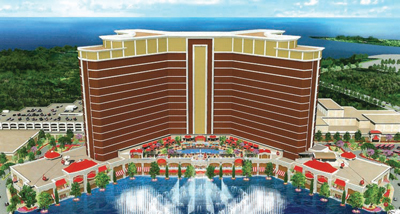 Wynn Cotai got a grand sendoff in February when its parent company, Wynn Resorts, began construction on the project, many years in the making. Chairman Steve Wynn said stabilization work on the reclaimed land has been completed and the driving of foundation pilings was started, some as long as 100 yards or more.

The project is expected to cost nearly $4 billion with a three-year build-out, which, if accurate, will mean an opening date prior to the Chinese New Year celebration in 2016.

During an earnings conference call in February, Wynn revealed some details about the property. Wynn has previously been quite secretive.

“We’re the first (light-rail) stop on Cotai between the ferry terminal and the airport,” Wynn said. “The stop is right at the middle of the lake we’re building that’s roughly the size of Bellagio.

“At the bottom of the escalator from that light-rail system, we have put a Doppelmayr gondola car that has music and is air-conditioned,” he continued. “People will get into the gondolas and they go around the fountains into the hotel, looking at the fountains and down at our pool area while music plays and fountains dance. We are meeting in many, many new ways the challenge of our neighbors and hoping to get the folks in the other hotels to experience our own. And all of this is such great fun.”