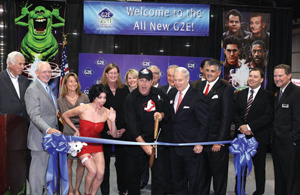 That was the almost unanimous consensus this year at the close of the 2011 version of Global Gaming Expo. While an unrelenting economy continues to buffet the casino industry, G2E featured enthusiasm, energy and a positive outlook toward the future.

With a new site—the Sands Expo Center, adjacent to the Venetian and Palazzo hotels—and a new date during the first week of October, attendees were pleased about the accessibility of the show, as well as the restaurant, bar and lounge amenities surrounding it.

The positive outlook was indicated by a study released at G2E. A survey of more than 1,150 attendees of Global Gaming Expo found that most feel optimistic about next year.

Asked about their predictions for 2012, 77 percent of respondents said they feel positive about the direction of the casino industry for the coming year, and 80 percent believe the company at which they work will improve in 2012. Most—76 percent—are secure in their jobs for the coming year.

“These survey results indicate that there are exciting times ahead for the gaming industry,” Courtney Muller, senior vice president of G2E producer Reed Exhibitions, said in a press release.

The keynote sessions at G2E are always a big draw, and this year was no exception. The opening keynote featuring magician/philosopher Penn Jillette drew several thousand attendees, with Jillette explaining his libertarian views—including a complete acceptance of gambling—sandwiched in between magic tricks that included creative uses of a nail gun, juggling flaming batons and broken bottles, and a remarkable feat of fire-eating (all the while explaining how he did the tricks).

The participants reviewed such issues as how the negative economy has impacted the gaming industry, the possibilities for online gaming, and the role for women in gaming. Takahashi led an in-depth discussion about the differences in the Asian and Western gaming cultures and how casino corporations need to understand the nuances of both.

Birtha, who has experience in tribal and commercial casino companies, explained the difference between the two and noted the passion with which tribes approach their business opportunities. He explained how the Pascua Yaqui tribe, the owner of Sol Casinos, has used a measured, phased approach to the development of its casinos. Hackett explained how tribal government gaming will be financed in the future, given the impact of recent court decisions with respect to tribal sovereignty over the repayment of debt. Boyd explained how tribal culture is reflected in the design of many Native American casinos. And Knudsen discussed the groundbreaking nature of gaming technology that usually gets introduced in Indian Country before anywhere else.

Jim Murren, MGM Resorts’ CEO, continued a tradition begun last year by Caesars’ Gary Loveman and delivered a keynote address on Wednesday afternoon. Murren expressed optimism about the Las Vegas market rebounding, citing rising visitation, occupancy rates and revenue numbers over the past few months. He said his company will be very aggressive in expanding in Asia and online, described the sophisticated social media program being developed by MGM, and explained that the demographics of its customers are shifting to a younger, more affluent clientele. Non-gaming revenues for MGM have grown faster than casino revenue, according to Murren.

As for the elephant in the room, Murren said that MGM’s $9 billion CityCenter is what it is, for the time being.

The conference program at G2E addressed all of the important issues impacting the gaming industry. Just some of those issues:

• Mobile gaming: A panel said Nevada regulations are beginning to get up to speed with those of the European countries where mobile betting—particularly sports betting—is popular. Suki Sandhu, vice president of product for IGT, said the reluctance of telecom carriers to carry mobile gaming is fading. He also noted that, like Europe, Nevada is approaching mobile gaming as just an offshoot of online gaming.

Lee Amaitis, CEO of Cantor Gaming, said the restrictions about where players could bet in Nevada via mobile devices are disappearing, now that the legislature has approved a bill that permits betting in all areas of the casino resort.

• Tribal regulations: The annual panel consisting of the members of the National Indian Gaming Commission produced a recap of the year’s progress. NIGC Chairwoman Tracie Stevens explained that consultations with tribes have been very helpful in repairing fractured relationships. She told the audience that the agency’s oversight of Class III minimum internal control standards is unchanged, and that in combination with state and tribal regulators, the vast majority of tribes have instituted MICS. No legislation will be necessary to address this issue, she said.

Saying that mistrust in the “dysfunctional government” in Washington, D.C., has extended the recession by eroding consumer confidence, Isle of Capri Casinos CEO Virginia McDowell told the audience that what little capital expenditure Isle manages to make must first go into making sure the amenities of the company’s properties are up to date and in good repair.

“I can spend $200,000 on 10 new slot machines or renovating one of our casino’s restaurants,” McDowell said. “What is going to create the best entertainment opportunity for our customers?”

McDowell said the recent budget stalemates and other partisan bickering in Congress have affected both the stock market and consumer spending, meaning the recession is hanging around for a while. “People are nervous about spending money,” she said.

Patti Hart, the CEO of International Game Technology, was the only non-operator among the panelists. She joked that the operators were lamenting the recession to secure discounts on new machine purchases. “There are no discounts, folks,” Hart quipped.

• Internet Gaming: A panel of gaming industry experts examined the regulatory and legal issues surrounding the possible legalization of internet gaming in the U.S.

The panelists concluded that among the issues clouding the future of internet gaming legalization are its timing—the recent indictments in the “Black Friday” internet poker scandal and subsequent allegations of a Ponzi scheme run by Full Tilt Poker could delay movement of any internet gaming legislation until after the 2012 election cycle—and questions about what can be defined as internet gaming.

The regulators all said that among the issues that must be examined is whether activities such as fantasy football, social games with prizes to be awarded at brick-and-mortar casinos, and other various activities fall under the definition of internet gambling.

Solomon, the sole operator on the panel, questioned whether technology can assure that no underage players go on internet gaming sites, and whether, in the case of intranet gaming operations, computer IP addresses are an effective means of determining where a player actually is located. “How can you be absolutely certain that that person out there is who they say they are and is playing where they say they are?” Solomon said. “After all, we’re talking about the same people who leave their kids in a car when it’s 110 degrees.”

Moderator Levenson added that the first time media discover an online casino has permitted an underage player to sign on, the industry and the lawmakers who legalized it will be tarnished. “Imagine if it’s a 12-year-old who racks up a $20,000 credit card bill,” Levenson said. “And what if it’s the son or daughter of a U.S. congressman?”

The G2E exhibit floor was different, with the slot manufacturers lined up along the back wall of the Sands Expo Center. With more than 250,000 square feet of exhibits, the slots are always the most popular, but because of their location in the new facility, the smaller exhibitors got more traffic by their booths.