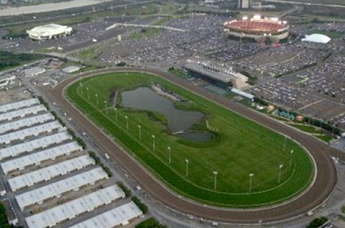 New Jersey legislators have hit on yet another way to expand gambling in the state by proposing on-site online gambling at the state’s racetracks.

A new bill introduced in the state Assembly would allow racetracks to offer online facilities—in the vein of internet cafes—to customers.

New Jersey already allows online gambling through sites linked or partnered with Atlantic City casinos. Those sites, however, can be accessed anywhere in the state. The new bill would allow those online providers to partner with the Monmouth Park Racetrack in Oceanport and Meadowlands Racing & Entertainment in East Rutherford. The tracks would then create online gambling areas.

“It’s not going to happen, Jay,” Christie said on the show, according to NJ.com. “We just put a referendum on to have casino gaming in other parts of the state, and it lost with 80 percent of the vote. Jay, the people have spoken.”

In November, New Jersey voters overwhelmingly rejected a plan to build new casinos in the state outside of Atlantic City. A small portion of that plan would have dedicated new casino revenue to help the state’s struggling horse-racing industry.

Proponents of the new bill say racetrack customers can already legally access the state’s online sites on their phones or devices—as they can anywhere in the state—and the bill simply allows the racetracks to set aside online gambling areas. They feel that the bill would not require voter approval.

Critics, however, say the move is simply trying to find a way around the defeat of the casino referendum.

Assemblyman Ralph Caputo, a co-sponsor of the bill, told NJ.com that the bill isn’t “circumventing the public.”