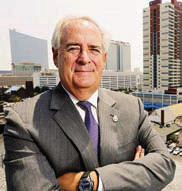 New Jersey will only block online gaming companies that operate in “grey markets” from receiving a state online gambling license if another jurisdiction has taken action against the site.

However, companies that operate in “black markets”—where online gaming has been declared illegal—will be shut out in New Jersey.

The clarification came in a position paper released by the New Jersey Division of Gaming Enforcement.

David Rebuck, director of the DGE, published an advisory bulletin on the “impact of operations in grey markets on suitability re. licensure.”

According to an analysis by CalvinAyre.com, the advisory defines “grey” markets as “jurisdictions where the legality of internet gaming operations is an open question,” while “black” markets are those where governments have “taken affirmative, concrete actions to actively enforce laws that prohibit online gaming, or have issued unequivocal official pronouncements that online gaming is not legal.”

Operators who do business in black markets “will not be able to establish the ‘good character, honesty and integrity’ required for licensure in New Jersey.”

For operators in grey markets, the advisory said that if no jurisdiction has taken affirmative, concrete actions against online operators, they should be able to meet the state’s licensing requirements.

Further, the division acknowledged that determining what constitutes legal online gambling in another country can be “fraught with the likelihood of error or misinterpretation,” citing the ongoing gambling turf wars between the European Union and some of its member states. But the DGE insists it “will not adopt a standard that could erroneously substitute its own judgment for that of another sovereign jurisdiction’s executive, legislative or judicial authority,” according to CalvinAyre.com.