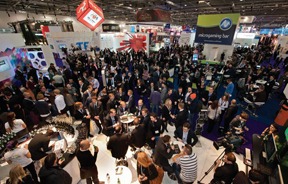 London’s ICE Totally Gaming, Europe’s largest gaming conference and trade show, kicked off its tenure in the new ExCel London venue last month with a bang, as thousands of gaming executives from around the world traversed more than 334,000 square feet of exhibit space.

Hundreds of exhibitors launched products for the European market, all stands surrounding the dominating display of Austria’s Novomatic Group of Companies, which set up a multiple stand highlighting all of its subsidiaries. At more than 30,000 square feet, it was the largest stand in the history of trade shows, according to company officials.

The trade show was accompanied by an extensive conference program, beginning with the International Casino Conference the day before the exhibition and continuing for the first two days of the trade event with sessions covering every aspect of the European industry.

A highlight of the conference was a keynote presentation by Michael Leven, COO of Las Vegas Sands Corporation, outlining the operator’s plan for EuroVegas, the $9 billion mega-resort complex planned for the outskirts of Madrid, Spain.

Among other conference highlights, Ron Goudsmidt, head of the European Casino Association, introduced a session on the evolution of the online gaming sector in Europe. Harrie Temmink, deputy head of the European Commission, predicted that i-gaming in Europe will reach €3.5 billion in annual revenues by 2015, or 15 percent of the overall gaming take in Europe.

Another session focused solely on the regulatory and legal issues facing the Greek gaming market. Ian Gosling, chief operating officer of Greece’s Regency Entertainment, noted the problems Greece’s land-based casino industry has had in emerging from the recession at the same time an illegal gaming market is growing in the nation. Gosling called on the Greek authorities and the E.U. for help battling competition that pays no revenue tax and does not have to charge entry fees like licensed casinos.

The ICE Totally Gaming trade show made full use of the massive ExCel London hall. Novomatic used its super-sized stand to launch new products from each of its subsidiaries. Among the highlights from the main Austrian Gaming Industries slot subsidiary was the new “Dominator” cabinet, which incorporates five video screens including a touch-pad button panel, topper and three main screens.

Other highlights of the trade show:

• Bulgarian slot manufacturer Casino Technology launched its “Tangra 2” cabinet, featuring improved ergonomics, super-comfortable chairs, and maintenance-friendly electronics. The company also launched its “Gamopolis” multi-game product, which is available in upwards of 60 different versions, each with 40 games available to the player; and “Planeta Payner Slots,” a new branded video slot series designed specifically for Eastern Europe that features music and video clips of many of the region’s biggest stars.

• TCSJohnHuxley introduced its “Zia” tablet-based product, which allows not only live and automated roulette but any other table game to be played on a mobile tablet; and “SuperNova,” a new mystery jackpot system for live table games.

• Slovenia’s Interblock set up a theater and a large stage to demonstrate the capabilities of its hologram-based display system for table games, drawing crowds to holograms of the Black Eyed Peas’ Fergie and other performances in a system to appear in casino table game installations by spring.

• Gaming Partners International Corporation demonstrated its new RFID Chip Tray Inventory system, which is one of the new uses the supplier is offering for radio-frequency identification technology. The new system uses RFID to keep track of chip inventory, float and counting of chip racks on table games.

• Internet gaming suppliers including Playtech, Microgaming and others introduced a host of new content designed for i-gaming operators around the world.

• European launches of major games from U.S.-based manufacturers included the “CSI” series from International Game Technology, “Pawn Stars” from Bally (Rick Harrison, who stars on the History Channel Pawn Stars series, was on hand for pictures and autographs); “Superman” from Aristocrat, based on the 1978 Christopher Reeves film; “Plants vs. Zombies” from Spielo International, which replicates the popular internet game of the same name (costumed “plants” and “zombies” were on hand for this one); and “KISS,” “Willy Wonka” and “Spider Man” from WMS Gaming.