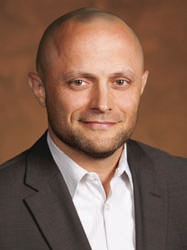 As former American Gaming Systems CEO Bob Miodunski prepared to re-enter retirement near the end of 2013, one of his last official accomplishments—after transforming the company from a Class II supplier into a growing Class III slot manufacturer—was to engineer the acquisition of the Las Vegas-based company by private equity firm Apollo Global Management.

One of Apollo’s first moves was to set AGS up for a future of growth by naming David Lopez the new president and CEO.

Lopez, who formerly was CEO of payments company Global Cash Access and before that spent 13 years with the former Shuffle Master, where he was chief operating officer, gives credit to Miodunski for setting the company up for future growth, but he also gives props to the management of Apollo for giving him the green light and resources he is now using the transform AGS into what he says is rapidly becoming a “true, full-fledged, diverse Class II and Class III provider of content and entertainment.”

Lopez says it all starts with the team. “My No. 1 priority when I arrived was people,” he says. “It comes down to team building… We’ve got a great team here, but as we grow, we’re going to need more people. And people are the straw that stirs the drink.”

The growth began almost immediately, as Lopez initiated an effort to expand the product offerings of AGS. He inherited a strong portfolio of products, but set to augment it, as is the norm these days, through acquisition. The most significant, he says, was the acquisition of slot supplier Colossal Gaming.

Colossal was founded and headed by Steve Weiss, a legend of sorts on the supply side as founder and CEO of Casino Data Systems. Its specialty was giant-sized slot machines, but Weiss was already beginning to expand his own company’s product line. He is now the head of game development for AGS.

“Steve is a very interesting and wonderful thinker, and he’s a great partner in the business,” Lopez says. “And obviously, he’s a leader with a mind for everything in the creative space. But Steve’s a former CEO, so he’s got a great strategic mind. He changed the culture of our development.”

As the Colossal game library began to merge with that of AGS, Lopez expanded the company further—into the table game area. Again, people were the focus. “After discussions with my boss (at Apollo), we agreed that we’d go after talent first,” Lopez says. “We got some of the top talent in the industry.”

AGS shrewdly took advantage of one of the mega-mergers of the past two years, mining the talent of the former SHFL entertainment to bring in John Hemberger, who had run the table game business as general manager at SHFL and Bally, and Ofir Ventura, a game developer who created several successful products.

Lopez also has been busy forming partnerships. A new deal with the custom-motorcycle reality TV show Count’s Kustoms will create a blackjack side bet that will award certain hands with a spin of a prize wheel to potentially win a custom, one-of-a-kind motorcycle.

The coming year will see Lopez pursue the nuts and bolts of transforming AGS into a more complete supplier. He says that means refinement of a new slot platform—perhaps using elements of the current Roadrunner and Colossal platforms, but creating a next-generation operating system as opposed to combining the two technologies. (“Combining two platforms is like trying to put toothpaste back in a tube,” he says.)

AGS also will determine the best games to make available on that platform, by analyzing the performance of legacy AGS games like Ripley’s Believe It Or Not, an unqualified success in the “It Pays To Know” knowledge-based series, and Colossal games like Dynamite and Birds of Orion.

He says what stays in the library will be a function purely of how the games perform in the field.

Licensing to expand the company’s markets also will be a priority. In four years, AGS has gone from 70 mostly tribal licenses to more than 170 in North America. “That’s a lot of hard yards for the team,” Lopez says. “They’ve been working their tails off.”

From a larger perspective, Lopez says AGS and other slot-makers have to find ways to attract new players. “The level of interest and attraction and engagement of players in slots seems to have leveled off, and I think players are looking for something more,” he says. “Have slot machines changed enough? Besides curved screens and large-screen formats, has the industry evolved enough to continue to attract new players?”

Finally, Lopez says he will continue to build the company up through merger and acquisition, and will augment his team by tapping into the pool of available talent that continues to grow as the mega-mergers in the space play out.

It’s an opportunism that has already served AGS well. “In Class III, we want to be a provider of slots and proprietary table games, and at some point it will be more than that,” says Lopez. “AGS will be known by operators as a good partner when it is said and done.”