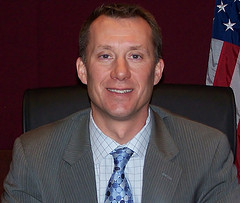 With the future of legalized fantasy sports still up in the air, quite a number of people are pointing toward Nevada to set the standard for the U.S. Nevada Gaming Control Board Chairman AG Burnett announced the state will look at a “legal analysis” of daily fantasy sports (DFS).

Currently, DFS operates in Nevada as an unregulated industry, being a skill game not currently considered in the same vein as similar regulated games, like sports betting. There is no clear way of determining what the NGCB might find, although it might find DFS to be like sports betting and thus covered by state law. It might also find the skill aspect is not being met in some or all DFS.

In an interview with Liana Baker from Reuters recently, Burnett said, “When you start offering daily fantasy contests, then you start to blur the line between skill and chance. When chance begins to govern the outcome more than skill, you have a form of gaming, and that’s when the need for regulation kicks in.”

Burnett continued, “I don’t have an opinion yet (on the legality)… The issue is not whether skill is present. It is whether the skill of the players determines the outcomes of the game they are playing.” In April, American Gaming Association President Geoff Freeman said a report “on fantasy sports and sports betting” will be released in November.