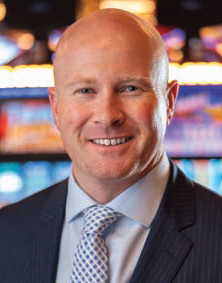 If you grow up in Nevada, the epicenter of casino gaming in the United States, it may seem like you are destined for a career in gaming. Sure, there are numerous examples of Nevada natives who have excelled in pursuits outside of gaming. It’s logical, however, that many of the industry’s modern leaders grew up in parallel with the industry’s growth in states where gaming has proliferated. And no state has more of an omnipresence of gaming than Nevada.

While Andrew Diss, who grew up in Nevada, didn’t begin his career in gaming, he ultimately made his way to the industry. Diss, the chief strategy officer and senior vice president at Meruelo Gaming, comments on the influence that growing up in Nevada had on him, saying, “You’re always surrounded by the gaming industry, so it’s something present in the back of your head whether you know it or not.”

“I’ve had an atypical path into gaming that started after working for several years in government,” says Diss. “I was initially hired for a government affairs position with the Grand Sierra Resort in Reno that eventually morphed into including the other businesses that our ownership operates, including Sahara Las Vegas, the Arizona Coyotes and several ventures in California.”

Commenting on what attracted him to, and keeps him in, the industry, Diss explains, “I enjoy working at the intersection of business and government, where one day I’ll be working on gaming matters, the next day on banking issues, the day after that on land use and construction. It’s always something different, which keeps it interesting.”

Diss is quick to give credit where credit’s due when it comes to those who helped him get to where he is today.

“My dad has always been the person I look up to most,” notes Diss. “But in my professional career, it’s undoubtedly my boss, Alex Meruelo. He has an incredible American Dream success story, and I am extremely fortunate to benefit from his experience, insight, and mentorship. He’s also one of the most loyal and fair people I’ve worked with.”

He offers up one more mentor who’s had an outsized impact on his career, commenting, “I also look up to Phil Satre as the man that has set the bar for integrity and servant leadership in our industry.”

While he has excelled at his current company, Diss believes some of the most challenging, yet exciting times of his gaming career came in his early days at Meruelo. “We were in acquisition mode, so just keeping pace with turning around the operations and culture of the Sahara and the Arizona Coyotes was an exciting challenge,” says Diss.

Even though Diss notes his early days of gaming were some of his most challenging, he continues to welcome and grow from new challenges in his current role.

“The best way to learn how to do something is to actually do it yourself,” says Diss. “I find myself in new situations every day where I am constantly trying to navigate an issue or opportunity for our company that is new and unique.”

This perspective on new challenges and openness to learning coincides with Diss’ advice to young professionals within gaming.

“The surest way to becoming indispensable is, don’t be afraid to be uncomfortable! What I mean by that is don’t limit yourself to working in areas you already know,” explains Diss. “If you want to advance your career, you need to learn new skills which can be difficult, but it’s the surest way to expand your capabilities and make yourself useful to your colleagues and impress your boss.”