Legal online gambling in the U.S. has yet to hit the jackpot. More targeted marketing could help it advance to the next level. 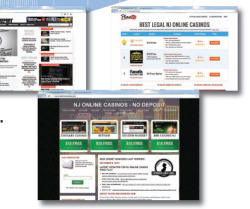 When New Jersey legalized online gambling in November 2013, Governor Chris Christie predicted the digital games would gross billion in the first 12 months, for 0 million in new taxes for the state. As everyone knows by now, Christie was overly optimistic—by about 0 million. The first year’s returns were underwhelming to say the least, with a statewide take of 1 million. Nationwide, in the three states where iGaming is legal (New Jersey, Nevada and Delaware), the total for those first 12 months was an anemic 5 million.

Every new industry goes through growing pains. Two years in, with a lot of lessons learned and a mountain of new consumer data, iGaming marketers are refining their approach to strengthen the returns.

They have a big incentive. According to a 2013 report from the American Gaming Association, online gambling is a $33 billion global market, of which $3 billion comes from bets already placed (albeit illegally) in the U.S. That same year, analysts at H2 Gambling Capital said the legal stateside iGaming market could be worth about $9 billion by 2018, especially if big states like California, Pennsylvania, New York and Illinois get in the game.

In April of this year, Morgan Stanley predicted the online gaming market in the U.S. could be worth $2.7 billion by 2020—a conservative estimate, down by half from the firm’s September 2014 valuation.

It’s still guesswork at this point. But one thing seems sure: iGaming in the United States is a sleeping giant. Marketing is the persistent nudge, trying to wake it up.

“The first goal was to raise awareness that the activity even exists,” he says. “We did bus stops, highway billboards, airport lounges, TV advertising, radio, newspaper and of course, digital internet marketing. We ran the gamut initially.”

That scattershot approach evolved as the organization piled up data on the behavior and preferences of existing and potential online customers.

“Unlike in a land-based environment, here you really have a digital record of everything that happens, which is very helpful in terms of marketing and getting to understand your customer,” says Palansky, former communications honcho for the NFL Network. “With a history from two years of this offering, along with the patterns we know from our land-based and Total Rewards database, instead of catch-all marketing like billboards or TV spots, we can really drill down to try to reach where we know our customers are.”

For example: “If customers that live in Pennsylvania travel to our Atlantic City properties six times a year, we know that. We also know what games they typically play, so we target-market them based on their favorite games, making them aware of the (online) opportunity when they’re inside New Jersey borders.”

Online marketing also reaches out to recapture inactive players. “Say you have a working mother who hasn’t played since June—she’s had the kids out of school all summer, and between vacations and camps and the change in schedule, she’s been dormant for a couple of months. If she’s a slot player, we’ll try to re-engage her with offers tied to her favorite games.”

Of course, the promotions work both ways: An online poker player would likely get spot promotions for land-based tournaments. Thanks to marketing that is much more data-informed and analytically driven, players who like mixed games as opposed to no-limit hold ’em might not be targeted “until we’re running a mixed-game promotion that’s more geared to their usage,” says Palansky.

“We don’t quite drill down to the individual,” he adds, “but you get a sense of what works when you get a response rate of 38 percent activity (on one promotion) and reach 6 percent with the next one. You start to realize over time what players perceive as better value and what’s more interesting to them, so you can refine your offers and promotions.”

“Taking the time to learn and measure is vital to sustaining a successful platform,” perhaps even more so in Atlantic City, where “visitation is much higher than in Las Vegas,” says Joe Lupo, senior vice president of operations at the Borgata in Atlantic City. “BorgataPoker.com and BorgataCasino.com started from ground zero nearly two years ago, and have seen an increasingly steady uptick in popularity, which we expect to continue as more games come online.”

Perhaps surprisingly, there’s still an educational element to the marketing of online games. “Operators have invested a lot of money into advertising their brands and ensuring that people understand this is safe and legal, because not everybody is aware of that,” says Itsik Akiva, iGaming expert and founder of the Boston-Based Headway Consulting.

The main message, he says, is the ease and immediacy of play. “This is what we saw in the first two years—operators trying to get people to experience this, without opening their wallets, to see how quick and easy it is… We show you the offer and the product, we show you that you can access this from digital devices, practically anywhere. And we try to point you to act immediately by registering, playing for free or making a deposit.”

Free offers “were more common around launch,” he says. “Some operators are moving on to other types of offers, but you can still find $10 free play, $20 free play, or offers for free spins that allow you to actually win a little money without making a deposit.”

Concerns about online safety and security, as well as resistance to Big Brother-style invasions of privacy, may be stopping some people at the gate.

Another lesson learned: the customer base for online games may hew pretty closely to that for land-based games. In other words, digital games may not be the honey that will catch those swarms of elusive millennials—which leaves the gaming industry as a whole with the same old nagging problem: how to create a new generation of enthusiastic patrons.

“Operators hold those statistics very close to their hearts,” notes Akiva, “but I will say that online casinos are more appealing to people from their mid-30s up to their mid-50s and even 60s, both male and female. They play different games, but pretty much it’s a 50-50 split generally between male and female. This is where most of the activity is. I don’t think younger people are playing that much, and they don’t present as much of a significant audience for online casinos.”

He says young people “feel less of a thrill playing real-money games like slots. There are obviously people in this age group that do enjoy that, but I don’t think they adopt it as much as they adopt other online entertainment like fantasy sports or even social games. The more valuable and loyal players are still a bit older.”

While poker tends to skew young and male, Palansky says, “the typical slots player is still sort of a middle-aged female. A blackjack player tends to be a middle-aged male. It kind of varies by game type, but our casino offerings though CaesarsCasino.com and HarrahsCasino.com have a pretty broad base of offerings that can reach all demographics 21 and above.”

The Role of Affiliates

Unlike new-to-market competitors and European operators who are less well-known in the U.S., Caesars Interactive Entertainment has a famous name, a long history and a massive 50-million member database of potential online customers. Even so, in July it enlisted the services of an affiliate marketing network, Quebec-based Income Access, to help it develop new leads for its online poker brand and online casinos in Nevada and New Jersey.

Affiliate marketers—who are active in countless industries including health care, online retail, education and online dating—are a good deal for casino operators for a simple reason: their compensation is based purely on results.

“They refer potential users to the site and are remunerated once those players perform an activity—once they convert,” explains Akiva. “There are different ways of referring players, but if you are able to drive online traffic through a website and have it tracked through a unique code that is provided to you, then you could potentially be an affiliate.” In theory, anyone can do it, he adds. “You can have one guy writing a blog who does it on a weekend, managing a bunch of sites, and then have affiliates that have hundreds of employees, and everything in between.”

The method, which originated in Europe in the early 2000s, was first used in the U.S. by unlicensed operators who couldn’t employ traditional channels. Affiliates had other ways of driving traffic, such as special sites dedicated to gaming, says Akiva. “A lot of the time, they attract people who are actively searching for gaming products. They will have sites that rank well for gaming keywords, etc., so therefore, they present potentially high value because they convert better.”

He says affiliates may matter less as the markets regulate, but can still play a major role in driving quality traffic to gaming sites. “The thing with affiliates is that once you work with them, you need to be ready to give up some control over your message and your brand and how it is presented. (But) I am a big believer in the affiliate market. It’s a great way to attract players in a very concentrated way. You normally pay after you have seen the results, so you’ve pushed the risk to your affiliate. If they know how to do their job, they will be rewarded and you don’t lose any money as an operator.”

There are other reasons the market has been slow to grow in the U.S., like the limited player pool and the continuing reluctance of banks and credit card companies to process online gambling transactions. That may change as global payment processor PayPal tiptoes back into the online gaming market in the U.S. Until 2003, PayPal accepted such transactions in the U.S., but cut them off when the federal government began cracking down on online gaming operators. In September, the firm—which has always been active in the European gaming market—launched a trial with four legal online U.S. gaming companies to give players another way to fund their accounts.

And speaking of Europe, according to the European Commission, the E.U. gambling market is worth about €84.9 billion ($95.5 billion) per year, and is growing at a predictable rate of around 3 percent annually.

Will the U.S. online market ever rival Europe’s? Some observers say the tepid results in Nevada, New Jersey and Delaware have quenched the appetite of other states to legalize online gaming. But the industry is not likely to really get traction until other states jump in and more interstate compacts come to pass.

“The problem is the state-by-state approach; it’s a lot more expensive and much messier to operate this way,” says Akiva. “But when those platforms and services are shared among different, multiple jurisdictions and there are more markets to operate in, this will make it more economical for operators and investors. And then you’ll see major operators get more aggressive and ambitious.”