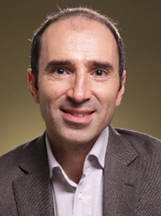 Nehme Abouzeid is president and founder of LaunchVegas, a consulting firm dedicated to brands looking to launch big in Las Vegas and other destination markets. Prior to forming LaunchVegas, Abouzeid worked in various senior capacities at Las Vegas Sands, Wynn Resorts and the NHL’s Vegas Golden Knights. He spoke with GGB Publisher Roger Gros in Las Vegas in January.

GGB: You started your career as a journalist, worked for such major companies like Las Vegas Sands and Wynn Resorts, and then, of course, you were the first marketing VP for the Vegas Golden Knights. What did you learn at each of those steps, that allowed you to make the next step?

Nehme Abouzeid: Going to journalism school and my experience of five years as a journalist really helped me become a quick study at everything—ask the right questions, learn how to flesh out a subject. So I think journalists are underappreciated, especially in their ability to tell a story and relate very complex subjects in simple ways. And then going into an industry like gaming, that has many lines of business under one roof, all of which could be independent companies on their own, and doing $20 billion in development I helped work on at Wynn and Las Vegas Sands, it really guided me well.

What is it that makes Las Vegas so special, and why do you call it your home?

I didn’t expect to be here, to be honest. I was a Boston guy, went to college in D.C., lived in the Middle East and Los Angeles when I was a journalist, and Vegas was the last place I’d expect to be. But it’s going on 15 years now, and I believe the quality of life here is sort of that best-kept secret, nationally. I’m also invigorated by Las Vegas’ constant reinvention. When you think about it, with 400 casinos in 40 states, we all could be looking at the Strip and they could be rusting hulks of steel. I’m proud of Nevada, I’m proud of Las Vegas, because we all roll in the same direction, when a project is good for the economy.

The next reinvention of Las Vegas will start in 2020, with several new projects slated to open. How can people prepare for that change that’s coming up?

If you’re talking about locals, you know, Vegas always had this real unique dynamic, where 2 million locals are spread out, and 43 million tourists are highly concentrated. We have 200,000-plus people working in gaming and hospitality, so it’s a really interesting dynamic. But it’s not your typical market. It’s not like L.A., it’s not like Chicago, it’s not like New York; it’s quite different.

How does your company LaunchVegas participate in this next phase of Vegas?

I’ve been doing this 15 years, helping big brands with big development projects launch and scale—especially with the $500 million hockey team. I personally had spreadsheets that I was cataloging for years, of how to launch a project with a critical path, how to do it right, how to launch and scale. So, I realized I kind of have this Vegas playbook, and I could give this expertise to companies that wanted to come in and enter the market the right way. So, that’s really what I focused on, and I called it LaunchVegas because really I wanted to focus on early-stage, yet big projects. Right now, I’ve got clients in the sports betting, tech and the health care spaces. So we’re really not just limited to casinos.

Why did the Golden Knights work so well for Las Vegas?

Tourists wanted to follow their team—that was obvious. But when Las Vegas locals want to brag about how good their seats are, how much merchandise they own, it really came together, and credit to Mr. Bill Foley for pushing the idea, and the Maloofs for having the vision, and then hiring the right people to make it happen. I remember, I joined the team on November 7, 2016. We unveiled the logo and name November 22. And at that time, (NHL Commissioner) Gary Bettman said, “I’ve never seen that many people come out, just for a name and a logo unveil.”