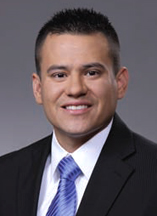 If you ask Dustin Thomas how he arrived at being one of the youngest executives at the National Indian Gaming Commission, he will tell you it was with a lot of patience and a lot of persistence.

“I owe everything to my parents,” Thomas says. “We didn’t have a lot growing up—at one point, we didn’t even have running water—but we always made the best of what we had, and this recognition is a testament to the principles of perseverance and work ethic my parents instilled in me.”

“Every day I came to work I learned something, not only about my current position but other positions, too,” he states. “I would study operational procedures, gaming compacts and other regulations, and was always asking questions, always preparing for the next career opportunity.”

Early on in his career as he was trying to gain supervisory experience, Thomas took a supervisor position that included a significant pay cut. He said the move was questioned by his friends and family, but the value for him was to get the supervisor experience to prepare himself for management positions. And he says the gamble paid off in the long run.

Thomas says he had the opportunity to work for and with many great leaders and learned a lot by observing how they conducted themselves, what strategies they used, and how they communicated with others. In his current role as director of compliance, Thomas credits Tom Cunningham, NIGC assistant director, with being a tremendous resource. “He’s a longtime federal employee with a ton of expertise, and that has been enormously helpful to me as a new employee of the federal government and being a federal regulator.”

Another person who had great impact on Thomas’ career early on was Klint Nephew from the Seneca Nation. As Thomas was starting out and navigating the professional world, he reflects on how Nephew took the time to coach him and help him get on the right track. Thomas also credits many great people from the Seneca Nation, Forest County Potawatomi and the Potawatomi Hotel Casino for giving him opportunities to grow and emerge, and is grateful for the opportunity to learn from NIGC Chairman Jonodev Chaudhuri, who he calls a “great leader.”

As one of the youngest professionals at NIGC, Thomas makes it a general rule to make himself available to other emerging leaders in the organization, taking the time to learn about their career goals and encourage professional development opportunities. “The gaming industry as a whole and particularly tribal gaming is growing year after year,” Thomas says. “Every year there are regulatory, technology or market changes that are shaping the industry, and with that there are increasing opportunities for emerging leaders.”

His advice to future emerging leaders: “Be a student of your profession. Set your sights on where you want to be and then formulate a plan on how to get there.”