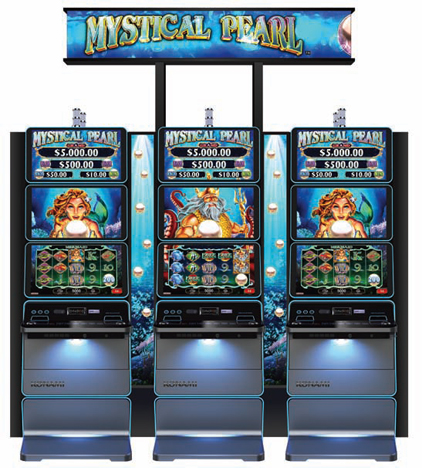 This new game family, comprising Mystical Pearl Mermaid and Mystical Pearl Neptune, is featured on Konami’s core Dimension 27 cabinet. Game play on the undersea-themed linked progressive focuses on collecting simmering pearl symbols for a hold-and-re-spin bonus that can result in one of four jackpots—static prizes of 1,000 times the denomination (Mini) and 5,000 times the denomination (Minor), or progressives resetting at $500 (Major) and $5,000 (Grand).

The base game is a five-reel video slot that can be configured with 25 or 50 paylines. Six or more pearls scattered on the reels trigger the hold-and-re-spin feature (this occurs every 80 spins on average). During primary or free game spins, the main character (Mermaid or Neptune) randomly adds pearls to the reels before they stop spinning. Credit prizes are attached to the pearls, and the pearls stay in place as the other reels spin in a three-game persistent cycle.

Icons corresponding to all but the top Grand jackpot also can appear during the hold-and-re-spin feature. The Grand is won by filling all 15 reel symbols in the array with pearls. The Mini, Minor and Major jackpots scale upward with higher bets. According to the company, the Major jackpot hits an average of every other day on a four-machine bank.

Both the primary game and free-spin round feature Konami’s trademark “Action Stacks,” stacked symbols that result in huge wins. They are more prevalent in the free games, when multipliers can be added to the wins.