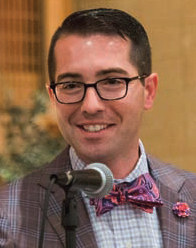 Brandt Iden brought uncommon perspective to his panel last month at the Winter Meeting of the National Council of Legislators from Gaming States (NCLGS). There representing Sportradar as its head of U.S. government affairs, Iden came to that position and the gaming industry after serving in Michigan’s House of Representatives from 2014 to 2020.

During his legislative tenure, Iden served as chairman of the Regulatory Reform and Ways & Means Committees, and was named one of Michigan’s “50 Names to Know in Government” by Crain’s Detroit Business. Although, what he is best known for, and what led him to the business side of gaming, is serving as the architect and lead sponsor of Michigan’s Lawful Internet Gaming Act—the legislation which paved the way for legalized online gaming, sports betting, advanced deposit wagering for parimutuel racing and fantasy sports contests in the state. Notably, this legislation regulates online gaming for both commercial and tribal operators, a unique feat in today’s gaming landscape.

Looking back, Iden admits he had no idea what he was getting into.

“I saw revenue opportunities, had an interest in new approaches to player protection, and, frankly, I am a gambler; but I did not realize how hard it was actually going to be to get this done,” he says.

The diverse set of stakeholders and paradigms presented interesting challenges. However, in the end, he did get it done. And in 2018, his bill made it to then-Governor Rick Snyder for signature, only to be vetoed in the final days of the legislative session.

“That was a major blow,” says Iden. But, as the saying goes, if at first you don’t succeed, try, try again. Iden was forced to start all over, educating a new set of legislators and a new governor about the opportunities and safeguards of online gaming. There were plenty of days where he felt like negotiations weren’t going anywhere, but, “ultimately we crafted better legislation,” he says, “and passed the bill with a large, bipartisan majority. That was a great feeling on the heels of our first loss, only a year earlier.”

Over those four to five years of policymaking, Iden realized he had a real passion for the industry. He found great mentors in Nick Menas of The StarsGroup at the time (now with Seminole Hard Rock Digital), who brought him a lingering iGaming bill from the Michigan Senate when he became chairman of the House Regulatory Reform Committee, and Mike Neubecker, then president and COO of MGM Detroit, who walked him through all the economics of the industry and helped him to understand the impacts of varying tax rates.

The recent surge in legalized sports wagering coincided with Iden’s move to Sportradar, where he has spent his time at the forefront of states with enabling legislation. He’s excited to see this dovetailing with other developments like cashless wagering, iCasinos and conversations around blockchain technology.

“This is the work that will pave the way for the future of our industry,” he says. “It’s not just about crafting legislation that makes sense for today; we have to build it for tomorrow.”

As he looks ahead, Iden is enthusiastic about the industry’s current focus on diversity and technology, both issues he feels will be critical to its evolution.

“The demographics of our customers are changing, and we’re competing more and more for talent; these issues are central to the success of gaming in the U.S.” Speaking to his fellow Emerging Leaders, Iden says, “As we grow, and the industry grows, our focus should be on what we can do, this class, to create a meaningful legacy—to make this the point of change we can look back on in 20 years and know that we made a positive impact on our industry.”