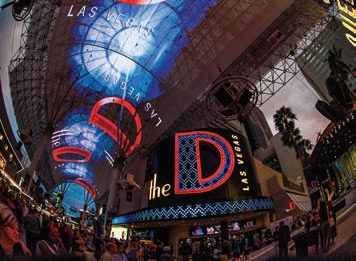 D is the word, or the letter, actually. The new D Hotel Casino in Downtown Las Vegas isn’t actually named after any one thing or person. It’s on D Street in Downtown, and is owned by Derek Stevens (and his brother Gary), who comes from Detroit.

There is no overall theme to the D, but it brings an excitement and difference to the area. Go-go dancers, sexy dealers, the largest sports bar in Nevada (the LongBar) and a vintage second-floor casinos are all signs that this isn’t your father’s Fitzgerald’s anymore.

The Stevens brothers bought the property from the estate of Don Barden, the Detroit entrepreneur who made his mark on the gaming industry before his death several years ago. The D’s steakhouse retains the “Don B” name.