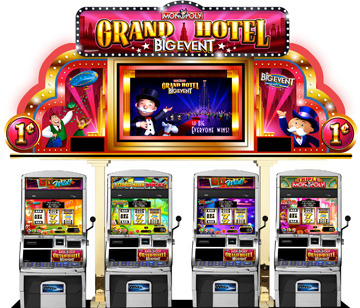 With this game, WMS combines the community-style “Big Event” game with the Transmissive Reels video-overlay technology used for animation and bonus events on traditional stepper games, into a package that should be a player favorite.

Like the earlier Monopoly Big Event games, each player on the four-machine bank earns an incrementing multiplier amount through normal play, and all players enter a community bonus event at once, with bonus wins multiplied by the number earned during the primary game.

It is available to casinos in a traditional style, with a single payline and dollar denomination, as well as a nine-line nickel version and a 15-line penny version.

There is a “Boost” symbol on the third reel which will bump up the player’s multiplier amount, over and above the normally earned boosts. There also are individual features such as wild symbols and jackpot multipliers that appear in the various base games. There are two initial base games in the link, Triple Monopoly and Go Wild. A third game, Boardwalk Bucks, will be added soon.

The community bonus game occurs randomly, independent of any result on the reels. When that happens, everyone on the bank enters the bonus round with the Big Event Multiplier they have earned. Each player is assigned one of the characters from the Monopoly board game. Each character is then assigned a multiplier for the credits they will win. On the overhead screen, the four characters emerge from an elevator and jump onto the giant Monopoly board. Several “guests” from the hotel will jump with them onto the board spaces—each board space awards a credit amount, multiplied by the number assigned at the beginning of the bonus.

Six of the spaces award “Mini Bonuses.” If the player’s character lands on Electric Company, Water Works, a railroad, Chance/Community Chest, “GO,” or Free Parking, the player’s screen goes into an individual bonus event to arrive at the award.  Most of the events are simple “pick-a-tile” events or animated sequences, on the face of the Transmissive Reels screen.

At the end of the bonus round, players’ awards are multiplied by their Big Event Multiplier numbers. “Guests” increase the awards as well.