Tribes and states disagree on payments due 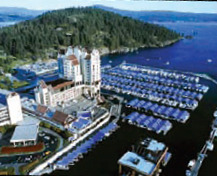 Tribes in two Western states are battling about payments that were part of gaming compacts.

Last year, the Coeur d’Alene Tribe of Idaho did not make the legally required payment of 5 percent of its annual net gaming income. The funds support local educational programs and schools on or near the tribal reservation.

The payments are required by a 2002 voter-approved law mandating the state’s Indian tribes to donate 5 percent of their annual net gaming income. The Coeur d’Alene tribe publicized its contributions until 2009, when it stopped making payments. The Idaho Lottery Commission, the state agency in charge of enforcing the Indian gaming law, refused to provide verification. It cited the 1992 compact that states, “All financial information regarding the gaming operations of the tribe shall be deemed confidential and proprietary information of the tribe and shall be protected from third-party or public disclosure without the express written approval of the tribe.”

However, Idaho state law reads, “Every person has a right to examine and take a copy of any public record of the state and there is a presumption that all public records in Idaho are open at all reasonable times for inspection except as otherwise provided by statute.”

The issue may end up in court, experts noted.

And in New Mexico, Gaming Control Board Chairman David Norvell says most of the state’s 14 casino-owning tribes are underpaying their share to the state by $13 million-$20 million or more.

The issue concerns how tribes account for free play, which does not involve money spent by a gambler, but casinos include it—wrongly—in a formula used to determine what they owe the state according to revenue-sharing compacts, Norvell says.

“What we believe is happening is they are offering promotions to customers who are coming in and playing machines and taking wins, and the tribes are deducting those winnings to arrive at the casino’s net win,” Norvell says. “They should not be taking that deduction since there is no money going into that win.”

Norvell says an arbitrator may be required to solve the issue. State legislators would have to approve the $1 million arbitration costs during the 2012 session. If an arbitrator sides with the tribes, “we will back off,” Norvell says.