A new recipe for the original casino resort 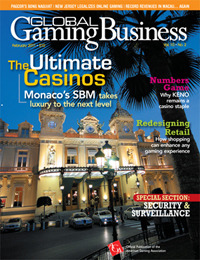 Speaking in his office across the plaza from the famed main casino in October, Lambert was perhaps thinking of the results of the first half of the fiscal year. Gaming revenue for the six months ended September 30 was off considerably from the year earlier, signaling the potential start to a third year of trending downward.

Then again, the company that operates the legendary casino resort has reinvented itself so many times over the past 148 years that Lambert might merely have been channeling the general spirit of the enterprise.

As Lambert interprets it, “Create something different, but keep our rules and keep our DNA very much alive.”

The decline in gaming revenue followed six years of gradual growth that culminated in a seventh year of record highs at the operator’s five casinos. Fiscal 2007-2008, which ended March 31, saw combined GGR of €259.6 million, or $410 million using the conversion rate on that date. The following year, revenue fell 19 percent to €210.7 million. For those with short memories, the reduction coincided with the international economic crisis, which struck full-force in autumn 2008.

But there was another powerful factor involved. In a case of worst-possible timing, a smoking ban in enclosed public spaces came into effect in Monaco on November 1, 2008. As a double-whammy, the casinos undoubtedly had benefitted in the year earlier from the smoking ban in France, introduced in February 2007.

The connection between smokers and slot play has been well demonstrated in venues around the world, and Monaco is no exception. To remedy the situation, in April 2009, Monte-Carlo SBM introduced at its Café de Paris casino a slot terrace with enough of an opening to the outside air to qualify as an outdoor space. The result: revenue per machine on the terrace is three times that of those inside.

“We utilize these terraces at least 300 days a year, because they are protected,” says Lambert. “Of course, this is not the tropics; we have rain and wind sometimes.”

Encouraged by the result, it was decided this year to try the same for table games. The logical choice for such an experiment was the Sporting Monte Carlo, which has a casino open for two months during the peak summer vacation season. Switching the restaurant tables normally on the terrace with eight gaming tables from inside the casino proved a hit.

“At certain times, and most of the evening, there was nobody inside; everybody was outside. Even though not all of them smoke, they wanted the experience of being outdoors,” says Lambert.

As a result, terrace gaming is in the process of being implemented at four of the five casinos. Only the Sun Casino, which has no direct access to the outdoors, will be missing this feature.

At the fabled Casino de Monte-Carlo, also known as the grand casino, the addition of outdoor table gaming areas is part of a planned complete refurbishment. Originally the casino was to shut its doors for six months while the work was performed. However, that model was exchanged for a phased implementation, which will allow gaming to continue in those rooms not affected at the moment.

Included in the first phase are the private gaming rooms and the construction of a large terrace for table games. The terrace will attach to the existing façade on the south of the building and overlook the sea. A second outdoor gaming area is more of a restoration project. That space, on the eastern side of the casino and enclosed for the past 50 or 60 years, will be converted back to its original role as a terrace, this time with gaming tables.

Historically, the clientele of Monte-Carlo has been associated with table game play. As recently as 2003-2004, table games accounted for 69 percent of all gaming revenue. But in that year, the company established a strategic alliance with Wynn Resorts, taking a 3.6 percent interest in the Las Vegas-based operator. The stated objective was to “enhance” the gaming and promotional expertise at SBM.

“Steve Wynn gave us quite a number of tips in terms of slot machines,” says Lambert. “We followed the advice that we could follow, because of his vision and the fact that he knows us well.”

The company set to work on an active program to improve and expand the slot machine offering and go after a previously untapped guest pool. Within three years, slot revenue went from €64.6 million to €118.9 million—surpassing the take from the tables and accounting for 53 percent of gaming revenue.

Slot revenue peaked the following year, 2007-2008, the year before the financial crisis hit. Slots brought in €131.7 million, edging out a reinvigorated table game result by 51 percent to 49 percent.

Total gaming revenue fell 19 percent in 2008-2009. However, the existing momentum of the slot market kept that segment’s decline to 8 percent, while table games dropped a sobering 30 percent. The bottom line was that 58 percent of gaming revenue came from slots that year.

It appears that the economy caught up with slot players in 2009-2010. Slot revenue dropped 16 percent, to €102.2 million, while table games rebounded 10 percent, to €98.2 million. But that revival has been short-lived. In the first half of 2010-2011, table games generated only €37.7 million, a drop of 45 percent compared with last year. Slots continued their descent but at a slower pace of 8 percent, producing €50.8 million and again on course to outperform tables for the year.

The Rise of the Hotels

It is not just the relationship between tables and slots that has changed in recent years. There has been a parallel though less dramatic increase in the percentage of revenue derived from the hotel sector. Included in this sector are lodging, catering, and seaside and spa activities.

Again going back to 2003-2004, the hotel sector accounted for €104 million of revenue, just 31 percent of the annual total. But work was already under way to expand the hotel supply and range, work which has helped raise that annual contribution to around 40 percent for the last four years.

In 2004-2005, an ambitious project to add capacity to the Hotel Hermitage was completed. Begun in 2002, the €34.4 million expansion and refurbishment featured the addition of two floors built on top of the existing structure. Care was taken to match the exteriors of the new floors to the existing façade, which dates from 1900. The work added 46 rooms and eight suites ranging in size from 98 square meters to 165 square meters. Among these is the 172-square-meter Presidential Suite, overlooking the harbor.

The five-star Hermitage now has 237 rooms and 43 suites. The original units have all been renovated, as well as the main central kitchen and the back of the house, including air conditioning.

The Hotel de Paris has seen its share of refurbishment as well in recent years. Originally built in 1864, the five-star hotel today has 182 rooms, 75 suites including a presidential suite, three restaurants, a bar, a grand function hall, and direct access to the spa Thermes Marins. Renovations have occurred in phases since 2001, and the rotation will begin again in winter 2011-2012.

In 2010 the Hotel de Paris received the “Leaders Club Guest Recognition Award of Excellence,” and the hotel’s general manager, Luca Allegri, was named “Best Hotelier 2010.” The awarding body is composed of the most loyal clients of the “Leading Hotels of the World,” a group of 440 hotels and resorts of the highest quality. Created in 1928, the group looks at over 1,500 specific criteria when assessing the quality of a member property, and the reviews are updated regularly. The award is highly valued as it is voted by the group’s guests themselves.

Typifying a slightly more modern era, the seasonal, five-star boutique hotel Monte Carlo Beach underwent a complete renovation in 2009. Architect India Madhavi was given the task of re-creating the elegance of the original 1929 structure while introducing the features mandated by contemporary convenience and comfort. The hotel was basically rebuilt from the foundation up, resulting in 26 rooms and 14 suites, four restaurants and bars, a spa and a pool, all at the edge of the Mediterranean and accessible by its own private dock. The project was completed for €15 million.

Redoing existing properties and adding extra floors to classical hotels was one way to freshen the Monaco experience. But in keeping with the desire to appeal to new market segments, more was needed.

“What we decided to do finally was a hotel that was more of an all-inclusive type of resort, more American-like if you wish,” says Lambert. “We wanted to have this hotel more on a contemporary basis and cater to a younger crowd, coming to Monte-Carlo with families, for weekends, an all-year resort.”

The result is the four-star Monte-Carlo Bay Hotel & Resort. Opened in October 2005, the hotel added 313 rooms and 21 suites, four restaurants, a bar, a spa and a casino, but with only slots and electronic table games.

“We have only a small casino, because we don’t have much space in Monaco,” says Lambert. “The principality can just not sustain another casino.”

Monaco is only 2 square kilometers in area, about three-quarters of a square mile, and most of that is rocky slope. The only independent land smaller is Vatican City.

When Lambert assumed the CEO role in 2002, he brought with him a modern set of tools for marketing and client relations, plus an understanding of the changing leisure product. This he learned in 28 years with the Meridien Hotels group, the last five of which he served as president and managing director. He recognizes the unique position of Monte Carlo.

“I think that Monte Carlo, Monaco remains a destination with glamour, which keeps its roots definitely anchored, but with a contemporary twist,” says Lambert. “Without saying that it is exactly like it was in 1950 or 1960, we are keeping this story, this magic, a part of it. We are still catering to a clientele that is very sure to find security here, cleanliness and security, and we adapt ourselves by providing the guest with new experiences in terms of spas, restaurants, lounges, bars and venues for entertainment.”

In 2008 the operator added Moods, a live music venue underneath the Café de Paris. In 2010, Buddha Bar opened in an unused space at the far end of the main casino building and drew huge crowds for months. And the legendary Jimmy’z continues to draw.

Western Europeans are still the backbone of the market, and visitors from Russia and the CIS countries are now accounting for 10 percent of guests. There has also been a slight increase in market share from the Middle East. But business from the U.S. has fallen by half, from 21 percent of visitors to about 12 percent, and visits are also down from the U.K. and neighboring France and Italy.

To find new clientele, Monte-Carlo SBM maintains offices in strategic cities like New York, Beirut and Singapore, as well as having representatives present in China and South America. The company also sends its casino executives and hotel general managers on meet-and-greet tours when warranted.

The brand is crossing borders now, both real and virtual. In November, it was announced that Monte-Carlo SBM would be managing the “chic and stylish” Monte Carlo Beach Club on Saadiyat Island, Abu Dhabi. In Marrakech, Morocco, the company’s first resort outside of Monaco will feature a five-star, all-suite hotel, scheduled to open in late 2011.

Stepping into the online gaming world, Monte-Carlo SBM owns 50 percent of BetClic Everest Group, the former Mangas Gaming. The company is currently consolidating the four brands that comprise the group, but when ready the plan is to create a major international poker event to be played in Monaco.

Maybe on a nice outdoor terrace, overlooking the sea…