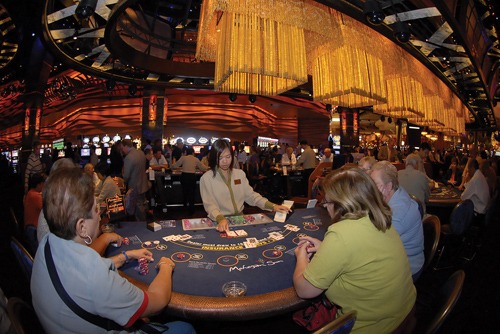 Connecticut’s Mohegan Sun last month opened the first phase of the mega-resort’s 5 million expansion. A tribal blessing, followed by a ribbon cutting, marked the occasion.
The project, the casino’s third expansion since it opened the Casino of the Earth 13 years ago, has been dubbed Project Horizon. That will be completed by 2010 when the 925-room hotel is opened.
The casino that opened last month, called Casino of the Wind, includes 650 more slot machines, a 42-table poker room called “Aces Up” and 28 table games.
New restaurants include Jimmy Buffett’s flamboyant Margaritaville, slated to open later this month, which will have a small plane hanging from the ceiling, and a quick-service deli, called the Chief’s Deli.
The project opened a little more than a year after breaking ground.
Inside of the casino are features designed to instill a sense of awe, such as a 35-foot wall of granite brought in from South America with vivid changing hues projected onto it and images of birds, leaves and clouds moving across the ceiling. In another room are twisted shapes of trees.
The opening is something of a gamble, since the tribe is betting that the sluggish economy, which has hit the Sun’s profits significantly, will turn around.
Mohegan Chairman Bruce “Two Dogs” Bozsum comments, “We didn’t see a reason to stop what we’re doing here on the casino side.”
Jeffrey Hartmann, the Mohegan Tribal Gaming Authority’s CEO, added, “The tribe always looks to the long term. We’re prepared to weather through.”
The expansion opening comes four months after the Sun’s main competition, Foxwoods, opened its $700 million MGM Grand at Foxwoods addition. Both casinos are engaged in something of an “arms race” to attempt to top each other, but that is the casino business.
“We watch them carefully and they watch us carefully,” says Foxwoods interim president Barry Cregan.
Some industry analysts see the expansion plans by both casinos as a well-thought-out strategy to define their market in national terms, rather than merely regional.
“There’s no question that’s a very conscious strategy that they initiated years ago on the full anticipation that other states would authorize slot machines or casinos,” says Clyde Barrow, a market analyst based in Massachusetts.