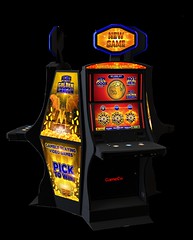 Mohegan Sun in Connecticut announced that Riches of the Golden Dragon, the newest title in the Video Game Gambling Machine series from GameCo, Inc., will be added to the gaming floor in Casino of the Earth. The first installation of the game in the U.S. is now live near Seasons Buffet at Mohegan Sun.

Riches of the Golden Dragon features three dragon tiles, and within each there is a reveal of either an immediate cash reward, tokens that can be used in Mini-Games, or a chance at a Bonus Round or Mini-Game.

The Bonus Round and Mini-Games are where skill comes into play, and also where tokens earned up to that point can be used to instantly win cash inside a Mini-Game. In some cases, a selected tile will take players directly to a fun Mini-Game like the “Melt Coins,” where players melt falling coins, while avoiding falling rocks, with an electric current by pressing the corresponding buttons.