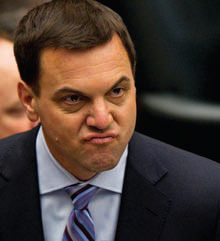 A so-called “modernization” of the Ontario Lottery and Gaming Corp., which included dropping a racetrack subsidy program, has some Canadian government officials fuming. Ontario Progressive Conservative leader Tim Hudak criticized the “abrupt cancellation” of the racetrack program, which gave 7 million a year from slot machine revenues to horse tracks.

“Why would you close down jobs in that sector when the biggest issue is creating jobs?” Hudak asked. “I would park it permanently on the shelf. I don’t believe it’s in the interest of the province to open up 39 new casinos. Instead, I would build on what’s working.”

According to CTV News, Toronto Auditor General Bonnie Lysyk has also criticized the change. “OLG included projected profits from those casinos without first confirming that new casinos would be accepted, would be considered, in certain municipalities,” said Lysyk. “In fact, large Ontario cities such as Toronto and Ottawa rejected OLG’s proposals for constructing new casinos.”

OLG has failed to find an appetite for downtown casinos in Toronto and Ottawa. By opening new casinos downtown in major cities, OLG said, those downtowns would become tourist destinations for the young and affluent. But the cities weren’t interested. OLG Chairman Philip Olsson said in an open letter to Lysyk that modernization “is a multi-year plan, now in its third year, which, upon completion will deliver approximately $1 billion annually in additional net new profit to the province.” In the end, he said, it would increase the government’s take from gaming from $2 billion a year to $3 billion a year.