Two decades of the casino and gaming industry transform the rural Southern state into a vibrant, national tourist attraction 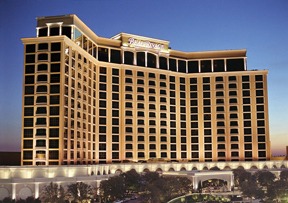 When legal casino gaming came to Mississippi in the early 1990s, the state was still attached to its stigma earned in previous decades as being resistant to many political and social policies widely accepted by the American public. However, the state’s decision to be an early embracer of casino gaming outside of the traditional markets of Atlantic City and Nevada has proven to be a smart decision that has changed the financial and social stigmas of the state, transforming it into one of the country’s most popular tourist attractions.

“The gaming industry has been very good to our city,” says Biloxi Mayor A.J. Holloway. “Before the casinos came, we were almost in bankruptcy and were just trying to make payroll. Casinos made a lot of difference on what we could do as a city.”

The most visible change in the state’s gaming landscape in 20 years was the change from floating riverboats to land-based casinos.

“Pre-Katrina we were required to have our casinos built over water, and in a post-Katrina era we are now able to move on land,” says Duncan McKenzie, president and general manager of Hard Rock Hotel & Casino in Biloxi. “This has allowed us to expand our abilities with regards to what we are offering our customers. For Hard Rock Biloxi, being able to rebuild on land was a huge development.”

The transition from “cruises to nowhere” to full-fledged Las Vegas-style casinos has been the engine of the financial boom the state receives from the industry.

“Gaming is the engine that drives the tourism market here on the Mississippi Gulf Coast,” says Beverly Martin, commissioner of the Harrison County Convention and Visitors Bureau, and former executive director of the Mississippi Casino Operators Association. “It has provided first-class hotel rooms and amenities that were previously unavailable in this area.”

Hard Rock Biloxi has become a prime example of the transition from riverboats to first-class facilities and entertainment options that the region offers. With a combination of popular modern acts such as Lady Antebellum, Maroon 5 and Train, along with legendary performers Duran Duran, Stevie Nicks and Tony Bennett, it is easy to see why Mississippi has established itself as both a gaming and entertainment mecca for Midwesterners and Southerners in the U.S.

“Because of our strong occupancy rates, we recently announced a 154-room tower expansion for the property,” says McKenzie. “Just like our region, we have enjoyed many accomplishments since opening five years ago.”

Mississippi’s state legislature is widely credited for having the foresight to make the state’s gaming industry a free-market system, which established competition from day one. The free-market strategy was also vital in moving away from the state’s ties to over a century of illegal gambling.

“Biloxi had illegal gaming for years,” says Holloway. “We had a taste of it, and we knew how much money it would mean for the state if we did it the right way.”

Policies set by the state’s gaming commission have positioned Mississippi for success, and a fair tax rate has drawn in developers.

“Another important requirement set forth by the commission was to have a match equal to the amount of investment in the casino into non-gaming entities,” says Martin. “For every dollar spent on the casino development, another was required to be spent on non-gaming amenities like golf courses, hotel rooms and marinas.”

With nine casinos in Biloxi alone, the economic impact on several industries and sectors has greatly improved the standard of living for the private citizens of Mississippi.

The impact of gaming on the finances of Mississippi is the ultimate before-and-after comparison.

“Before gaming, our state’s unemployment rates reached well into the double digits and health insurance was almost non-existent for service and hospitality employees,” says Martin. “When gaming came to Mississippi, it brought a standard of offering multiple employee benefits, which created a more competitive atmosphere promoting other hospitality industries to offer some of these benefits, including health insurance.”

The four biggest beneficiaries of the financial windfall provided by the casinos are state, county and city budgets, and especially the state’s school systems. Eight percent of the total gaming revenue goes to the state, 4 percent to the individual city, and counties receive various smaller percentages.

“It has been a good business for the cities and the counties,” says Holloway. “Our schools are better off, as we have been able to increase teachers’ salaries and salaries of city workers. Money was already coming in at the start from the economic impact of building casinos, and that impact is still very positive to this day.”

Just in 2012, the sales tax increase of revenue is up over $1 million per month, with the overwhelming majority of that revenue from casinos. Along with casinos, the attraction of the regional and national conference and convention industry has provided even more economic benefits. The 1,100 rooms at Imperial Palace and the 1,200 rooms of Beau Rivage Hotel & Casino are examples of the vast lodging resources that have made the state a favorite among meeting planners.

Once again, the state benefits from this popularity.

“Several areas have improved as a result of the presence of tourism and gaming,” says McKenzie. “Road improvements throughout the state, education, our golf courses and fishing amenities have seen vast improvements as more people visit the area for vacations and conferences. Gaming has become the anchor store in our tourism mall.”

It is a mall that is filled with more optimistic citizens whose state’s resources have multiplied significantly from what the previous generation of Mississippians experienced.

“Businesses are enjoying the benefit of casinos,” says Holloway. “Employees live here and enjoy it. Every day I am cutting a ribbon somewhere because a new business is starting. Before, we were starving to death.”

Coming Back from Katrina

The devastation left by Hurricane Katrina was more than a nightmare for all residents of the Mississippi Gulf Coast—it was a wicked reality. Both the Palace Casino and Boomtown were hit hard by Katrina, and the only casino that opened up quickly after Katrina was Imperial Palace because of its location on the Gulf Coast’s Back Bay, an area that was spared from the worst damage because there was not as much turbulence from the action of the waves.

“When Hurricane Katrina struck, it was apparent that the 17,000 jobs associated with the gaming industry had to be saved,” says Martin. “We knew a No. 1 priority was to get the casinos open and put folks back to work, which, in turn, helped us jump-start the recovery. I think we would be light years away from where we are, recovery-wise, had it not been for the commitment of the gaming industry to return, reopen and restart the Mississippi Gulf Coast.”

The legal gambling structure allowed for an economic and employment bounce-back that was impossible during the times of illegal gaming throughout most of the 20th century.

“As a state we have had some rough times after Hurricanes Katrina and Camille knocked us down,” says Holloway. “Some of the casinos never came back, but the ones that did had the wherewithal to build right back up to help keep our economy going.”

Mississippi is enjoying the fact that this is the first generation of adults identified with the bright lights and big business of the gaming industry, rather than its haunted past of intolerance, injustice and economic instability.

“Gaming in Mississippi has allowed people from other outer markets to see us in a different light,” says McKenzie. “There is first-class entertainment, dining, quality casino resorts for lodging, and overall, we have worked hard at becoming a top-tier destination for people to come and enjoy themselves.”

Although Mississippi established a stronghold in the region two decades ago, the rapid increase in surrounding states with gaming has created a much more competitive market. Louisiana, Missouri, Illinois and Oklahoma all boast several casinos that are in direct competition with Mississippi.

“Of course, as more and more states legalize some form of gaming, it has definitely had an impact on Mississippi,” says Martin. “However, the Mississippi Gulf Coast has the distinction of having gaming located on 26 miles of white, sandy beaches, as well as being located in one of the most hospitable places in America.”

Naturally, the increase of gaming and casinos across the country has had some impact. However, the more proximate regional markets such as Louisiana and Alabama have not changed much.

“Florida would be the market that has most impacted Mississippi, but it has not affected us greatly,” says McKenzie. “Mississippi still remains a stable market in the gaming industry, and a terrific tourism destination.”

Holloway has a unique system for keeping track of visitors when he is at Biloxi’s casinos.

“I like to read the license plates in our parking lots to see where our visitors are coming from,” says Holloway. “People who gamble are still going to come here on a regular basis, and we enjoy a great amount of visitors from Georgia, Florida and Louisiana.”

Mississippi’s dominance in the region in gaming has proven to be a buffer against the drastic economic problems faced by the entire country during the Great Recession. It is a completely different position for a state that used to be at the front of all the country’s economic problems.

“The downturn in the nation’s economy has had an impact on Mississippi,” says Martin. “But we think the gaming industry has helped us to offset some of that.”

Expanding on the Experience

Not satisfied with its two-decade run of success on the Gulf, the future of casinos and gaming in Mississippi is as bright as its past, ensuring that it will remain a leading market in the U.S. One of the projects in the state’s pipeline is located on the point of the peninsula. A building that was formerly the home to a cat food business is being completely renovated, and will become the future home to four or five casinos.

“The project will provide us access to a lot of capital, and we are welcoming developers with open arms,” says Holloway. “We try to help people with their businesses because they want to start as quickly as they can. We are looking to have the city build another access road to the new casinos, which will quickly pay for itself.”

The competitive landscape of Mississippi’s gaming environment ensures that complacency won’t make the market stagnant compared to its competition across the country.

“Hard Rock Hotel and Casino Biloxi is a first-class experience that rivals any market, with top headliner entertainment and dining that varies from sushi to high-end restaurants to all-American cuisine,” says McKenzie.

“When you visit Hard Rock Biloxi you will receive a unique experience you cannot get anywhere else, with customized amenities in the rooms that range from celebrity wake-up calls and special amenity packages to the exceptional guest services that only the great employees from south Mississippi can provide. We are excited to continue to grow and deliver exceptional guest service and a great full resort experience, which will continue to help the Mississippi Gulf Coast be the best casino and tourism destination in the region.”

As mayor for the city that is the unofficial headquarters of the state’s flourishing industry, Holloway understands the responsibility his city has to lead the region moving forward.

“It is easy to see that Biloxi was the right place to lead the gaming effort,” he says. “We are a world-class destination with world-class entertainers, dining and casinos. We have come a long way, and our future is very bright.”