The odds are stacked against independent game inventors 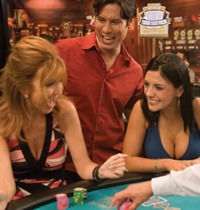 The preeminent name in table game math is Stanley Ko. To have Ko run the numbers to determine the profitability of any table game is the imprimatur for table-game developers. But Ko has one warning for the independent table game inventor: “You have no chance if you don’t know someone.”

That sentiment is echoed by Derek Webb, maybe the most successful table game inventor, who developed Three Card Poker into one of the most popular games today on the casino floor.

“Unless you have $100,000 that you’re willing to invest and then forget about it, it’s almost impossible to get your game noticed and legal for anything less,” Webb says.

Webb’s game, modeled after the British card game brag, didn’t really burst onto the scene. He spent years pitching the game to casino operators, getting it approved by regulators and teaching it to potential players. Then, he had to endure lawsuits and other legal action in connection with the ownership and promotion of the game.

“Getting a casino executive to agree to test the game is only part of the challenge,” he says. “Most jurisdictions have different rules and regulations surrounding the introduction of a game. The compliance barrier is just one hurdle. Some regulators want to ensure that you have adequate insurance and a good credit rating, although you are not the one who will be offering the game. We agree to indemnify the casino from any legal proceedings, but sometimes that’s just not enough.”

Roger Snow, executive vice president of Shuffle Master, Inc., the market leader in table game development in the industry, says his company is often approached by table game inventors. Often, however, it’s like searching for a needle in a haystack.

“We treat every game submission from a third party as if it were a combination of a bomb threat and a blind date,” Snow says. “We take them seriously and we hope for the best. Of course, most of the time it turns out to be a false alarm and it goes nowhere. Look, there’s a bit of art and science in this field.”

Snow says Shuffle Master has specific parameters when it considers these games.

“We look for games that, first and foremost, are fun to play. Is it relatively easy to understand and does it have any interesting nuances? We tend to market games that are derivatives of blackjack or poker. We have dabbled a few times outside those realms, and it never amounted to anything. Players seem to like blackjack- and poker-based games, so that’s what we like to see from outsiders.”

Webb agrees that unless the game is a derivative of an existing game, it has virtually no chance.

Webb says getting a test in a major market is a milestone, but not the holy grail for inventors.

“Three Card Poker failed in its first few tests, in New Jersey and Nevada,” he says. “It wasn’t until we did the test in Mississippi that it really took off and began to be noticed by other operators.”

Snow says it’s not necessary for an inventor to have anything more than a simple idea for a game for Shuffle Master to be interested.

“Sometimes the germ of an idea is enough for us to make a deal,” he says. “That way, I can sit down with the developer, the way I guess a record producer would sit down with a singer, and try to make something that has commercial appeal. However, it’s likely that we would offer more money for a completed game than for one that is just a loose concept.”

Webb says that rarely are inventors satisfied with deals to lease their games to any table game company.

“First of all,” he says, “they often have a greatly inflated idea of what their game is worth. Then they are often dissatisfied with the efforts put in by the company to market the game, forgetting the company has many other games it’s pitching. Then, if they’ve failed to patent the game adequately, they may get into a legal battle with the company.”

Snow says there are definite advantages to working with Shuffle Master.

“The most obvious advantage we have is in the area of sales,” he says. “We have salespeople all around the world with contacts at every casino. It’s relatively easy for us to call up a casino and say we’re coming over to show a new game. It’s not quite that easy for someone working on his own to do that. But we can also present the game in the best light possible. We have graphic artists on staff who design logos and layouts. We have player instruction cards that are high quality. We have done so many games over the years that we know, from a presentation standpoint, what works and what doesn’t.”

The biggest problem, according to both Snow and Webb, is that there is not a hunger for new table games from casino operators.

“In the 10 years I have been at Shuffle Master,” Snow says, “not once did a casino manager call me and say, ‘Hey, do you guys have any new games? I’m dying to put something new on my floor.’

“Look at history. Many of the most successful games in our industry met resistance from the beginning. And I don’t blame these casino guys. New games are 99 percent likely to fail; why take a chance and be first?”

Webb says the only secret is hard work.

“If you’re lucky enough to get your game on the floor,” he says, “you have to dedicate a lot of time to dealer training and customer training, which is often dealer training too, because you can tell the player what the payoff is and give those kinds of hints to inexperienced dealers of your game.”

“If your game does not outperform the lowest-earning game on the floor, you are toast,” he says. “Your game has to earn its keep, and to do that, it has to build a strong and dedicated following. Keep in mind that you don’t have much time. Most casinos will give a new game 30 or 60 days to prove itself. It’s like QVC or the Home Shopping Network—if your product isn’t an immediate success, you won’t be around too long.”