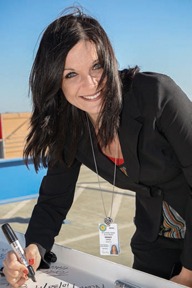 Wendy Carter has never worked in Las Vegas or Atlantic City, but her Midwest roots have made her the perfect choice at all the stops along her career path.

Carter was born and raised in Kansas and relocated to Iowa in 2003 with her husband. As a student at the time, Carter was looking for a career path, and the gaming/hospitality industry was as intriguing as any. From a young age she had worked in a local restaurant back in Kansas, providing her with “nine years in the service sector that helped me transition well into gaming,” she says. Her first introduction into the casino industry was at the Lakeside Casino Resort in Osceola, Iowa. It wasn’t long before Carter recognized she had found her calling.

Throughout her tenure at Lakeside, she has held leadership roles in sales, hospitality and marketing. Carter believes that her time spent in these departments while the company underwent a rebranding process after being acquired by Herbst Gaming Inc. in 2005 was an invaluable experience.

Carter left Lakeside Casino Resort in 2010 to assume a player development manager role at the Meskwaki Bingo Casino Hotel in Tama, Iowa. Just a few years later, in 2012, Carter took a significant promotion to work as marketing manager for the Choctaw Casino properties in Oklahoma. In September 2014, she accepted another promotion to director of marketing for the tribe’s exceptional Choctaw Casino Resort in Durant, Oklahoma.

Carter attributes her success to the support she received from her family and other key mentors from an early age. Growing up, she was part of a large household and learned quickly that, according to her parents, “if she wanted something—anything in the world—she had to go out and work for it.”

She quickly learned the nuances of the gaming industry and worked her way to a top leadership role for one of the country’s most successful properties, where she continues to work today.

“I believe that one major key to success in this industry is directly related to the quality of leadership a person is exposed to,” Carter says. “You learn what not to do from bad leaders, as well as how to be successful from the good ones. I have been incredibly fortunate to have worked alongside many of the greatest leaders in the gaming industry.”

One particular individual that she praises is Tami Hansen, a former casino marketing executive and director of marketing at the Iowa Speedway.

“Tami is one of the most talented marketers I have worked with; she is a leader who displays the highest level of commitment and integrity with any project she does,” she explains. To Carter, during her earliest days in the gaming industry, this was extremely valuable.

When asked about advice for young and upcoming professionals in the gaming industry Carter responds, “Be a person of good moral character, display integrity, and take calculated risks. I recognized early on that each person is in control of their own destiny, and it is up to the individual to carve out his or her own path. Never underestimate your ability to work hard, or that you are smart enough to be successful.”