Springfield hopes for win in Massachusetts 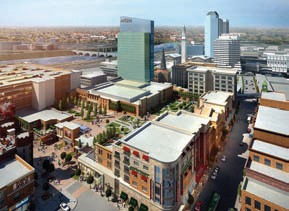 Springfield, Massachusetts voters on July 17 handed MGM Resorts International a solid victory as they endorsed its proposed 0 million casino resort for the city’s South End. The vote was 58 percent to 42 percent in favor. The vote allows MGM to compete for one of the Bay State’s three casino licenses.

MGM proposes a 250-room hotel and 89,000-square-foot casino with 70,000 square feet of retail and restaurant space in a three-block area of Springfield. Other amenities include a 12-screen cinema and a bowling center. State law requires casino developers to convince a majority of the voters in its host city before it can move its proposal forward.

Springfield, the Bay State’s third-largest city, is a working-class city that has one of the highest unemployment rates in the state. The birthplace of baseball, the city has seen challenging economic times in recent years, and came close to bankruptcy in the early part of the century. The part of the city where MGM wants to build was damaged by a freak tornado two years ago.

Now MGM must convince the Massachusetts Gaming Commission that its proposal is the best of all of the bids that will be made for the license for the Western Gaming Zone. Others in competition with MGM are the Mohegan Sun, which hopes to build in Palmer, and Hard Rock International, which is vying for a license to build in West Springfield in the fairgrounds of the Eastern States Exposition.