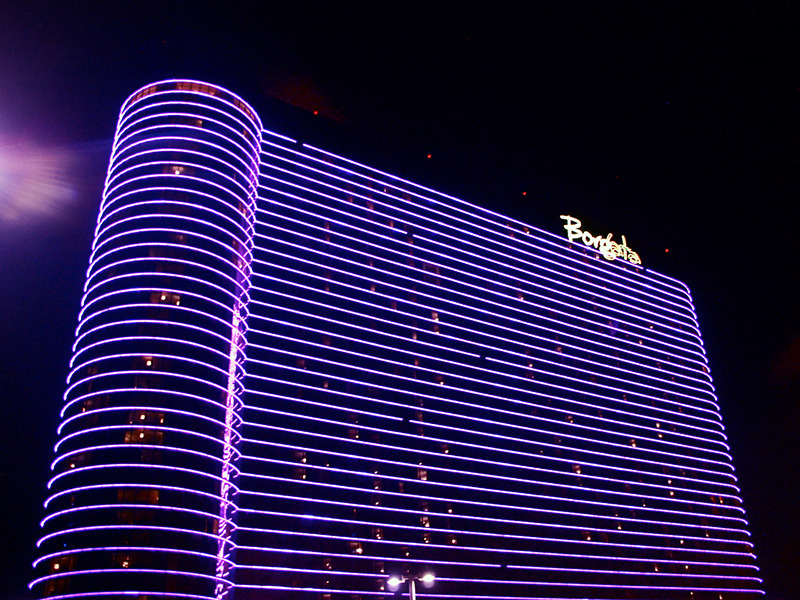 Just a month after opening its T-Mobile Arena in Las Vegas, MGM Resorts International continued to make news to bolster its position in Las Vegas and also on the East Coast.

The company doubled down on its Eastern presence, announcing it will buy Boyd Gaming’s 50 percent interest in Atlantic City’s Borgata Hotel Casino & Spa for $900 million, giving it full control of the property.

The transaction includes the Borgata casino and hotel and its non-gambling Water Club hotel next door in the city’s Marina district.

Under the deal, MGM will then sell the entire property for $1.18 billion to recently created real estate investment trust MGM Growth Properties LLC and operate the Borgata under a lease-back accord, the companies said in a statement. MGM Growth will receive rent of $100 million a year under the lease, the company said.

MGM already owned 50 percent of the Borgata, but was a passive investor in the casino with Boyd being the managing partner.

Boyd expects to receive $600 million in net proceeds after deducting its share of the property’s debt and also 50 percent of tax refunds owed the casino by the city of Atlantic City. Borgata estimates it’s entitled to tax refunds from the city totaling $180 million, according to Bloomberg News.

MGM Resorts Chief Executive Officer Jim Murren said the company made the deal to continue its expansion into the East Coast, which includes a casino opening later this year in National Harbor, Maryland, in suburban Washington, D.C., and another scheduled for 2018 in Springfield, Massachusetts.

MGM will be able to use its database of 60 million customers to promote the Borgata and achieve cost savings by making the property part of a larger enterprise, Murren said.

“We viewed Borgata as what it is, a high-quality, high-performing property that’s bucked the trend in a very rough market,” Murren said.

Under the joint-venture partnership with Boyd, neither company was permitted to use the Borgata customer database to promote anything other than Borgata.

“Borgata owns the database. Boyd doesn’t own it, and MGM doesn’t own it; it’s Borgata, which is somewhat frustrating,” MGM President Bill Hornbuckle told GGB magazine in an April story on MGM expansion.

The Borgata is the leading casino in Atlantic City and has continued to bring in strong revenue despite a severe downsizing of the Atlantic City market. Atlantic City saw four casinos close in 2014 and has seen its total casino revenue cut almost in half since 2005 to $2.41 billion last year.

Coincidentally, the deal was announced the day after Governor Chris Christie signed a bill that bails out Atlantic City’s fiscal situation and establishes a “PILOT” system (payment in lieu of taxes) for the city’s casinos that establishes a set annual payment to Atlantic City instead of property tax via assessments.

Murren did not mention the North Jersey expansion that gives Atlantic City casinos a 60-day window to bid on a northern project should the referendum be approved. But Hornbuckle told GGB MGM would be a participant in the process.

“We’re looking at North Jersey because we have to,” Hornbuckle said. “If something’s going to happen there, we have to be involved.” A preliminary bill gives Atlantic City casino companies favorite status when bidding for what will likely be two casinos in North Jersey. MGM would have been permitted to bid even without the Boyd deal, however, since it is a state casino licensee.

In Las Vegas, the plans are proceeding for the future of the Monte Carlo casino hotel. Monte Carlo will now be two hotels—Park MGM, a 2,700-room luxury hotel, and NoMad Las Vegas, a development by partner Sydell Group, which operates a hotel in New York City by the same name.

Hornbuckle says the project will transform the “neighborhood.”

“We are thrilled to partner with Sydell Group as we enter the final phase of transforming the neighborhood that we believe represents Las Vegas’ true entertainment epicenter,” Hornbuckle said in a statement announcing plans.

“Coupling MGM’s rich legacy of hospitality and entertainment with Sydell Group’s expertise in creating hotels that cultivate a strong sense of place will result in a destination that both celebrates the history of Las Vegas and ushers in a new era.”

Monte Carlo was closed in early 2008 following a three-alarm fire on the top six floors of the hotel. Those floors were redesigned as Hotel32, but will be renovated again for the new project.

At the same time, MGM is completing construction on the $100 million, 5,000-seat Park Theater in between Park MGM and the Park on the way to the T-Mobile Arena.