The Las Vegas casino company has won hearts, minds and a coveted casino license in the Free State. 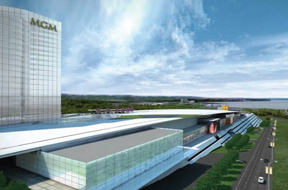 It’s a bold statement, but the odds may be with Murren. The project has a near-perfect location: at National Harbor, a 300-acre multi-use resort development on the banks of the Potomac River. It’s just south of Washington, D.C. and in clear sight of Virginia (which continues to shun casino gaming and shows no signs it will soon capitulate).

With a direct drop-off from the Woodrow Wilson Bridge, and dedicated exits from three interstates including the Capital Beltway, National Harbor is already a destination. In 2012, 9 million tourists, conventioneers and locals patronized its restaurants, bars, shops, marina and entertainment events.

Head of the Class

Because the other locations were not nearly as accessible as MGM’s, both operators sweetened their bids with givebacks to Prince George’s County. Penn National promised to “give back 100 percent of profits” from its planned Hollywood casino to the community, underwriting the operating expenses for a new hospital and also funding a teacher’s pension. Some observers saw Penn’s generosity as part of a strategy to safeguard its other interests in the region, specifically the Hollywood Casino at Charles Town, West Virginia.

Greenwood, which owns the Parx brand, offered to reduce its operator retention rate from the 38 percent allowed by the state to just 33 percent. It pledged $200 million up front for highway improvements around its planned development, but asked to recoup any costs exceeding $100 million from local grant monies.

Those efforts were for naught. When the die was cast, it all came down to the numbers. The consultants averaged their figures, and “MGM was $56 million more than the Parx location and $160 million more than Penn National,” says Stephen Martino, director of the Maryland Lottery and Gaming Control Agency. “So yes, from a gaming perspective our consultants thought the location of the MGM facility was going to generate the most revenue for the state of Maryland.”

The winning development will include a casino with 3,600 slots, 140 table games and a poker room, plus a 300-room, “4.5 star” hotel, plus restaurants, high-end retail, 35,000 square feet of meeting space and an entertainment center.

Stylistically, the casino will be a big departure from MGM’s Las Vegas home. With impressive views of the river, the nation’s capital and the obelisk of Alexandria, Virginia’s city hall, the resort will rise from a bluff on a stepped pedestal, “creating a sense of respectful monumentality,” according to MGM. Company officials say they took their design cues from Pierre Charles L’Enfant, who created the original 1791 plan for the layout of Washington, D.C.

“MGM has worked hard to be respectful of where this facility is going to be located, making sure it’s not garish, that it fits into the skyline and is consistent with the significance and importance of everything going on in the greater Washington, D.C. area,” says Martino. “At the end of the day, it’s a casino, and no one is going to dispute that, but it’s being presented and marketed in my opinion in a respectful and classy manner.”

Construction is expected to begin immediately, and the facility is set to open in July 2016.

“Given our investment, given our brand, given our cross-marketing opportunity, given the location itself, clearly we can drive more revenue,” Murren said after the win.

Lorenzo Creighton, general manager of the project, couldn’t agree more. “It’s Resorts 101—location, location, location,” says the gaming industry veteran. Creighton worked for MGM in Las Vegas and Detroit, and returned to the company in 2012 with the express purpose of developing the East Coast market, and adding to a portfolio that includes Tunica, Biloxi and Detroit.

National Harbor “is probably one of the best resort sites in the United States,” says Creighton. “Look at the population density. I-495 runs right by the property, and hundreds of thousands of cars pass by every day. You have three major airports in the region. All the superlatives about the location are true. But our proposal was also world-class.”

Industry analyst Frank Fantini of Fantini Gaming Research says the development will have a captive audience—and an affluent one. “The Beltway delivers the entire Washington population to your doorstep—that’s 2.8 million residents in Northern Virginia and the Washington metro area who didn’t have a casino, and now will have one.”

“Given there is no gaming in Virginia, you’ll have patronage from people there, and they’re probably going to market to parts even farther south,” says Martino.

“There is pent-up demand” for the facility, says Creighton, especially among Virginians, who reportedly spend up to $2 billion per year at out-of-state casinos. Of course, the patron pool isn’t limited to the driving public. “MGM has a huge database in its players club program on the East Coast,” Creighton adds—all of whom can fly into Reagan National, Dulles International or BWI and use their reward points at National Harbor.

The MGM development may siphon some business from Maryland’s other casinos—especially Maryland Live! at Arundel Mills Mall in Hanover, about 40 miles away. The Cordish-owned complex, located halfway between Baltimore and Washington, attracts about 25,000 people per day on a typical Saturday and saw a 49 percent jump in year-over-year gaming revenue in January, making it the state’s most successful gaming hall. The others are Hollywood Casino in Perryville, the Casino at Ocean Downs, and Rocky Gap Casino Resort, which opened last May.

“No question this is going to take bite out of Maryland Live!—is it going to be 10 percent, 20 percent? We don’t know,” says Fantini. “But Maryland Live!’s business is more oriented to Maryland and Baltimore than D.C., and they’re not going to lose a great proportion of that business.”

Even if MGM skims $94 million from Maryland Live!, as one consultant estimated, it would still be a $500 million-per-year business, says Fantini. “And $500 million for what amounts to a big locals casino is still a pretty good deal.”

A greater rival for Maryland Live! is Caesars Entertainment’s Horseshoe Casino, set to open near the M&T Bank Stadium in Baltimore later this year. The $400 million Horseshoe, which is expected to tip Maryland into the billion-dollar-a-year casino category, could take $130 million in gaming revenue from the Hanover facility.

But sing no sad songs for David Cordish, who is already working to offset the impact of both Horseshoe and National Harbor. In December, the chairman of the Cordish Companies announced his plan to add a hotel and convention center in Hanover, plus an “intermodal transit hub” with 1,500 parking spaces, ride-sharing programs and bus routes connecting to BWI Airport and local railway stations. The hotel alone will enable the casino to attract overnighters, who typically spend twice as much as day players.

The plan would enable Maryland Live! to “maintain our competitive edge,” said Anne Arundel County Councilman Daryl Jones in December. “Time is of the essence. We have got to start moving.”

During a contentious year-long bidding war, MGM was consistently put forth as the favorite. Penn National and Greenwood groused about the outcome, which will force them to reevaluate their own investments in Prince George’s County. Eventually, however, the losing bidders chose not to challenge the commissioners’ decision.

“No one here presumed that MGM was the frontrunner,” says Martino. “We set up a fair, thorough and transparent process so all the contenders had a fair shot. We were agnostic about who was coming in… I think the numbers speak for themselves, and clearly MGM has the ability to generate the most revenue.”

With development costs for National Harbor in the billion-dollar range, how much must the operator generate each year to pay the bills and turn a profit? Not to worry, says Fantini. “The Baltimore-Washington metro area has 9.3 million people. Yes, you’re going to have casinos in suburban Baltimore and one in the city of Baltimore, so it’s not like MGM will have the market to themselves. But the fact is, they’ll have the best part to themselves and still be able to draw from other areas.

“It’s going to be easy pickings” for Leo the Lion, Fantini says. “The consultants are projecting $660 million in revenue, but personally I think that estimate is way low. I think this is going to be $800 million or more.”