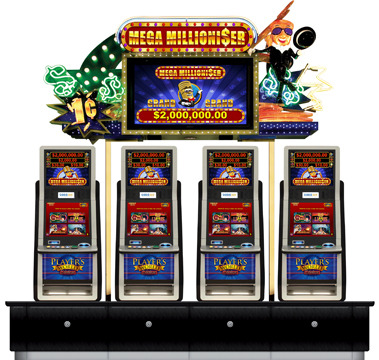 Mega Millioni$er expands the concept of Aristocrat’s Hyperlink multiple-progressive slots to include big-money multi-site progressive jackpots and a choice of base games.

This is the first multi-game unit in the Hyperlink series, in the Player’s World Deluxe video format. Progressive links will also include two individual games in the RFX five-reel stepper format.

The video version offers a choice of four base games-“Geisha,” “50 Lions,” “African Storm” or “Polynesian Pearl.” All are popular Aristocrat video titles, all 25-line games except the 50-line “50 Lions.” The RFX Stepper version is available in the base games “Sun & Moon” and “Pompeii,” five-reel steppers with a large LCD video screen for the common Hyperlink bonus. Aristocrat’s latest technology allows video and stepper games to be include in the same progressive link.

Each of the base games has a game-specific free-spin bonus event. However, the game’s controller sends the common progressive bonus event to a machine on the bank at random, regardless of the results on the individual reels.

The common bonus event results in one of three local-area progressives or the multi-site Grand jackpot, which resets at $2 million in Nevada and at $1 million in the GLI jurisdictions. The common bonus event itself is simple. Ten gold coins appear on the screen, and the player touches the screen to select gold coins, each revealing one of the jackpot amounts. Coins are selected until three jackpot amounts match for one of the four progressives.