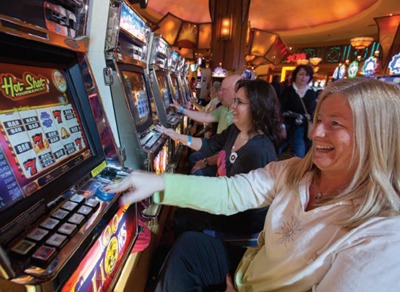 Sure, Bally was breaking its own records, and they were records invented by Bally. But that doesn’t make it less impressive, particularly from a technological standpoint.

On April 27, slot-maker Bally Technologies joined with Connecticut’s Mohegan Sun to stage the mother of all slot tournaments—a single, two-session event that involved more than 2,500 machines and 3,001 players. As Bally did last year with a similar event at California’s Pechanga Resort, the company had officials from the Guinness Book of World Records on hand.

The 3,001 participants were enough to set a new Guinness World Record for the “World’s Largest Slot Tournament,” and one of the two sessions had players hammering away at spin buttons on the hit Bally video slot “Hot Shot” on 1,610 different slot machines from various manufacturers. That was enough to score the Guinness World Record for “Most Slot Machines Running the Same Game Simultaneously.” The numbers bested records set last year at Pechanga for a 2,885-player tournament and a single tournament session on 1,110 machines.

For the players, the big draw was the money—a total of $100,000 given to 200 winners, with first-place winner Kenny Gonzales taking $50,000. For Bally and its big customer Mohegan Sun, the most important result of the record-smashing tournament was the fact that the casino was packed for the entire weekend. In fact, a crowd formed a line ringing Mohegan’s Casino of the Earth at around 6 a.m. to register for the contest. That night, it was hard to find an open machine on the slot floor.

“Even in smaller-scale tournaments like this we’ve done in the past, we always see a pickup in revenue when people come in to play,” said Mohegan Sun Slot Operations VP Frank Neborsky as his crew geared up to run the contest. “These types of events really show what makes Mohegan Sun great.”

“The most exciting thing about breaking this record is actually seeing the customers,” comments Bruce Rowe, Bally’s senior vice president of strategy and business development. “When they line up at 6 in the morning, thousands of people waiting for the chance to win one of 200 prizes, it’s just amazing.”

Mohegan, in fact, was the beneficiary of a similarly crowded floor two weeks after the tournament, when the casino hosted another Bally Guinness World Record event—the “World’s Largest Virtual Race,” a true enterprise-wide event in which every single slot across Mohegan’s three casinos—more than 6,000 machines—showed a virtual NASCAR race. Players with cards inserted in the slots were asked to pick one of eight famous NASCAR drivers, and after the video race ran on each slot machine, everyone who picked the winner split a prize pool, the credits downloaded right to each winner’s meter. Several races were run throughout the day on May 11.

The technology that made all this possible is the Bally iVIEW Display Manager system, a network which links machines to a back-end server via Ethernet connections. It is the marketing side of the server-based gaming technology originally intended to permit download and configuration of slot content.

Bally has a download manager available, but where it has really broken ground in the server-based arena is by using the iVIEW system for networked individual bonuses and promotional events such as the instant large-scale tournaments and Virtual Races—first introduced with horse races, then augmented with the NASCAR brand—in a package known as the Elite Bonusing System, or EBS.

“This is another huge moment for Bally Technologies,” said Bally President and CEO Ramesh Srinivasan before the tournaments. “The Guinness World Record events showcase our ability to deliver a tremendous return-on-investment to our casino partners. Similar EBS events have been proven to increase coin-in, time on device, carded play, and new players card signups. Working with a world-class casino like Mohegan Sun only further displays the power of iVIEW DM with EBS to create electrifying levels of anticipation and excitement across the casino floor and drive thousands of people to the casino resort.”

“It shows the great partnership Mohegan Sun has with Bally, the things that can be done with a good business partner, and what technology brings to the table,” said Neborsky. “This provides entertainment and real value for our guests.”

Rowe notes that tournaments on the scale of the Mohegan event would not be possible without iVIEW and EBS, because the system replaces physical chip change-outs necessary with traditional tournaments. The tournament game is sent directly over the Ethernet network to game screens, or to a small LCD iVIEW monitor on reel-spinning machines without video screens.

“We take over the game screens, and in a matter of seconds, we convert that game from normal play to tournament mode, and as soon as that tournament’s over, we turn it back to normal play,” Rowe says, noting that Virtual Races like the NASCAR event add another dimension by taking the promotional game to the entire slot floor.

“For the customer, it allows a choice of playing the game at a lot of different locations on the floor. It creates a floor-wide community event with a kind of contagious excitement you can’t get any other way. No matter where you are on the floor, you can see other people participating in this event, and you want to play.”

For the operator, Rowe adds that EBS amounts to a powerful tool. “It really fundamentally changes things for the operator, who is able to schedule events and get the customer into the building at the time they want them there,” he says. “We had people lining up at 6 a.m. for a tournament that started at 9, and those people will be here throughout the day playing other games.”

Rowe adds that “mega-events” like tournaments and Virtual Races are only one aspect of EBS. “There are more applications within EBS that are individualized, for personal reinvestment at the game,” he says. “That’s going to really change things. It will move all that reinvestment money we used to do through direct mail and make it much more effective for use at the game, at the time the player is there.”

While there certainly are a lot of ways to use EBS, the Virtual Race function is one that is rapidly spreading throughout the industry. The Golden Nugget staged the first NASCAR Virtual Race in Atlantic City on May 18, and casinos from the Florida Seminole properties to several Nevada and California properties, and even casinos outside the U.S., have staged Virtual Race events.

“I think the momentum is building, and you’re going to see these technologies in many more markets,” says Rowe. “We’re learning which things work, how to tweak them and make them better, and how to regionalize them somewhat.”

The next frontier, Rowe says, will be to take tournaments and Virtual Race events simultaneously to multiple properties. “We’re really looking forward to building this out to support multi-property, large-scale organizations,” he says, noting that he envisions regional satellite events leading to huge, national contests, to the ultimate benefit of multi-property operators.

It’s a good bet Bally’s going to keep the Guinness folks busy along the way.