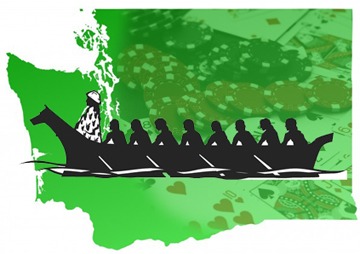 A strong relationship between Washington state and its American Indian tribes apparently paid off handsomely this year with newly amended gambling regulatory compacts that allow future increases in video lottery machines based largely on market demands.

The amendments, approved in a February 8-1 vote by the Washington State Gambling Commission, are expected to help the state’s 23 casino tribes expand hotel and non-gambling amenities needed to cope with a leveling-off of machine and table game revenue.

“These amendments are an important milestone for the people of Washington state and the Indian tribes,” commission Chairman Chris Stearns says. “The commission is proud to have worked on a government-to-government basis with the tribes as well as with the governor’s office.”

Commissioners and tribal leaders largely applaud the shift to market-based increases in the machine inventory, a move they contend will avoid time-consuming and often difficult negotiations.

In return, the commission secured a commitment from tribes to reimburse the state for the full cost of regulating the industry. The current fee arrangement falls short of covering all costs.

“It’s another progressive step by Washington state, being respectful of the tribes and the needs of their communities,” Allen says. “These compact adjustments allow the tribes to continue with the moderate growth we’ve experienced over the last five years.

“This agreement ensures that if we need more machines in the future, they will be available.”

Tribal-state relations are highlighted by the 1974 federal-court Boldt decision giving fishing tribes half the state’s salmon resources and the 1989 Centennial Accord establishing a government-to-government framework between tribes and state agencies.

“This is a historical agreement between the state and tribes that builds on previous agreements and the Centennial Accord of 1989,” says Leonard Forsman, chairman of the Suquamish Tribe. “This is an example of economic development in Indian Country which mutually benefits tribes and the state.”

Meanwhile, tribal governments, through WIGA, have strengthened ties with House and Senate leaders.

“We’ve done a very good job of developing a relationship with the leadership of both parties,” Allen says. “We’ve won some issues and lost some. But we’ve won more than we’ve lost.”

The political ties were important in convincing Governor Jay Inslee and legislators—particularly three of the four House and Senate members on the Gambling Commission—that the compact amendments would not result in an unbridled explosion of new machines.

A compact agreed to in 2007 with former Governor Christine Gregoire provided each tribe with 300 additional device permits and set a statewide cap of 28,000 machines.

The new amendments allow 27 of the 29 federally recognized tribes in the state to increase their allotment from 975 to 1,075 devices, generating roughly a 10 percent increase in the current statewide inventory of some 27,000 machines.

The agreement includes 21 tribes with casinos as well as non-casino tribes with allotments available for leasing. The Puyallup and Muckleshoot tribes did not sign the agreement.

Individual tribal inventories could also increase by 50 machines a year under a complicated formula if permits are available. If one tribe gets an increase, other tribes in the state will be eligible for a similar jump in machines.

The statewide inventory will likely increase by another 1,350 machines if the Cowlitz Indian Tribe moves forward with a planned southwest Washington casino that is tied up in the courts.

Theoretically, the amended agreements could cause the statewide inventory to double in 10 years, but market constraints are expected to limit the industry’s growth.

“It took 20 years for us to achieve that relationship and the level of confidence between the tribes and the state that the growth in gaming will be moderate from this day forward,” Allen says.

The amendments were not without detractors.

“In my opinion, this is probably the last shot we’ll ever get” to secure revenue sharing through negotiations on machine inventory, state Senator Mike Hewitt told the Olympian newspaper.

Just In The Nick Of Time

The additional 300 machine permits allowed to each tribe under the 2007 compact were largely used up when tribal officials and the state sat down a year and a half ago to work on the amendments.

“There were very few permits available to complement expansion projects,” WIGA Executive Director Ernie Stebbins says. “There were fewer than 100.”

Meanwhile, because of the 28,000-machine cap in the Gregoire agreement, Stebbins says non-casino tribes with machines to lease “were forced to sit on the sidelines.”

The fact it has taken nearly eight years for tribes to use up their additional 300 permits is evidence of the growing saturation of the Washington state market.

“The new machines will eventually get absorbed into the market,” Stebbins says of the amendments. “It won’t take seven, eight years. It might take three or four years.”

The additional machines will provide tribes with the financial leverage needed to expand casino development with hotels, restaurants, parking garages and other amenities.

Angels of the Winds casino, an enterprise of the Stillaguamish Tribe of Indians, recently opened a new hotel.

The Nisqually Red Wind is building a restaurant and non-smoking casino space.

And the Lummi Nation is building a new tower for its Silver Reef Hotel Casino, growing the room inventory to 205 and expanding its meeting space to 28,000 square feet.

“There’s no major expansion going on,” Stebbins says. “But just through the development of more hotel rooms and other projects, tribes feel they are going to have more players.”

“You’re seeing moderate growth as tribes enter into the hospitality industry,” Allen says. “That is helping adjust their market in a positive direction. The state is saying, ‘Yes, this works for us, too.’

“There is no need for us to come back to the state in the future for more machines. We can let the market demand drive the industry. The state is telling tribes that if we need more machines to leverage capital, we can do that. The state wants us to be successful.”

Casino general managers have complained that they are constrained by the compacts from competing with surrounding states and generating more profits.

“If you go to the NIGA (National Indian Gaming Association) tradeshow, 85 percent of the products on the floor cannot get into Washington state,” Allen says. “That’s a problem. That makes it difficult for us to be competitive.”

“There have been some concerns,” Gambling Commission Executive Director Dave Trujillo says. “Often, what you see advertised at the trade shows are not authorized in our state. A lot of it has to do with slot machines. Slot machines are prohibited by statute.”

GMs also expressed concern at the time and expense machine companies are faced with in getting approval from the Gambling Commission’s testing laboratory.

“The big issue is the need to streamline the review process with regard to vendors who want to bring their products into Washington state,” Allen says. “We need much quicker access to the new devices.

“Right now, we’re the last in line. The vendors go everywhere else in the United States because the entrance hurdle is so much lower.”

Trujillo says efforts have been made to speed up the regulatory review process. Most of the applications are processed within time guidelines set down in the compacts, he says.

“Generally, we’re better than the compact demands in turnaround time,” Trujillo says. “We think we have found the magical number for staffing.”

“I think under the new leadership at the Washington Gaming Commission and Dave Trujillo, we are going to be able to obtain improved technology,” Allen says. “He doesn’t want the commission to be an unnecessary burden to the ability of the tribes to obtain new products out there.

“It’s a much faster and cleaner process. And it’s much less expensive to the vendors, who normally pass the additional costs onto the tribes.”

The commission welcomes tribal efforts to negotiate for casino-style machines.

“I think technology will likely bring the tribes back to the table,” Amy Hunter, head of the commission’s communications and legal division, told the Olympian.

But any move from VLTs to casino-style slot machines will likely require approval by the state legislature or, perhaps, a public referendum, a move tribes are not anxious to make.

“I would be surprised if the state wouldn’t want to ask for a ballot initiative or public referendum on the issue,” Allen says.

“At this point we don’t view that as necessary. We think the current criteria in our compacts and what is allowed in the state give us enough leverage with regard to machine opportunities.”

Efforts to legalize internet poker in Washington state gathered little momentum in the 2015 legislative session, with American Indian tribes largely remaining on the sidelines as online bills were unceremoniously scrapped.

But moves by lawmakers to decriminalize fantasy sports were generating progress with bills introduced in the Senate and House scheduled for hearings.

Again, however, tribal leaders were standing clear of the debate.

Washington state has one of the harshest anti-iGaming laws in the country, with 2006 legislation later upheld by the state Supreme Court making it a felony to wager online.

The sentiment remained strong when House Bill 1114, an effort to legalize iPoker sponsored by Democrat Rep. Sherry Appleton, was dumped in February without benefit of a committee hearing.

The effort was pushed by poker player Curtis Woodard and the Washington Internet Poker Initiative, a grassroots lobby that for years has attempted to move a bill.

“It’s not the end, it’s just the beginning,” Woodard tweeted. “We’ll be back!”

While American Indian tribes have studied internet gambling through its trade association, the Washington Indian Gaming Association (WIGA), it has not taken a formal position on the issue and did not participate in the lobby effort on HB 1114.

“There’s never been a resolution passed at a WIGA board meeting one way or the other,” WIGA Executive Director Ernie Stebbins says. “They’ve shared information and each tribe is going to go in their own direction.”

“We’re continuing to explore the issue,” WIGA Chairman Ron Allen says. “We have to position ourselves to be ready if things happen at the state or federal level.”

The sentiment is not shared by the tribes.

“For the most part, we haven’t lobbied on the issue,” Allen says. “We’ve stayed on the sidelines. Our advisers told us it was not going to go anywhere.

“We haven’t talked about it extensively. We’re keeping a watchful eye on it. There is interest. But that’s as far as it goes.”

Fantasy sports have exploded in popularity, growing into a $1 billion industry with more than 41 million players, according to the Fantasy Sports Trade Association.

Wagering on fantasy websites is legal in all but Washington state, Arizona, Iowa, Louisiana and Montana. The federal government’s assessment is it constitutes a game of skill and not chance.

“In most states, the fact that you’ve spent all this time pouring over stats and making your own spreadsheets, that’s the skill part, and that weighs most heavily,” Chris Stearns, chairman of the Washington State Gambling Commission, told the Easterner newspaper.