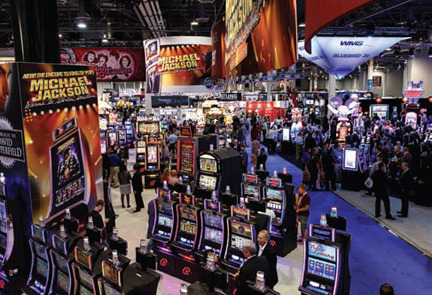 The first gaming trade show ever organized was the International Gaming Business Exposition, held in 1984 at Caesars Atlantic City, and founded by Irv Babson, the owner of company that owned International Gaming & Wagering Business (IGWB) magazine. The industry had grown exponentially since the first New Jersey casino opened in 1978, and there was a big market for slot machines.

The first show I remember attending was held at the Showboat in Atlantic City in 1987. It was the first World Gaming Congress (WGC), the predecessor to G2E. It was operated by the new owners of IGWB (Babson had sold IGBE to another company). At the time, I was working for Casino Journal, which had morphed from an employee publication in Atlantic City to the second-ranked national gaming magazine in the U.S.

Showboat at the time was the newest casino in Atlantic City. It didn’t have much in the way of meeting space, so the exhibits in the smallish Mississippi Pavilion took about an hour to see (as opposed to today’s G2E, which takes days to circumnavigate). As I recall, there were a few rudimentary seminars, which, as a novice conference-goer, I thoroughly enjoyed, as I had never seen a panel discussion about gaming at the time. Yes, Dr. Bill Eadington was well into his second decade running gaming conferences in Las Vegas and Reno, but I had never been able to afford to travel to them.

So since IGWB was now aligned with WGC, Casino Journal became the somewhat official publication for IGBE. It was there I learned how to moderate a gaming panel and offer my rapidly expanding perspectives on the industry.

There was a gentlemen’s agreement between the shows that one would be held in the spring (IGBE) and the other in the fall, both in Las Vegas, but in 1998, the owners of WGC bought what was left of IGBE and promptly folded it, becoming the singular show for the industry.

When the American Gaming Association was formed in the mid ’90s, it negotiated with WGC to receive part of the profits from the show. When that initial agreement expired, the AGA came back to WGC, asking for a larger slice of the pie, and WGC balked. At that point, the AGA was determined to start their own show—Global Gaming Expo—put it out for bid, and were blown away by an offer from Reed Expositions, which today remains the AGA’s partner in G2E.

The WGC fought back, however. The parent company at the time—it had been bought and sold frequently—purchased the magazine I was working for, Casino Journal, to consolidate the only two trade publications, and refused to accept G2E advertising in either. I determined that I’d rather go out on my own and take my chances. That inspired me to start Global Gaming Business, and with support from the AGA, we became the official magazine of the AGA and G2E.

It didn’t take long for WGC to go away. Two years later it ceased operations. A few years later, they folded IGWB.

Now, there have been dozens of conferences and trade shows devoted to gaming over the past 20 years. The ICE show in London is the chief rival to G2E, however, and they are each very different events. Others are niche conferences like the show run by the National Indian Gaming Association. Still others are regional, and some are issue-oriented.

For G2E, the biggest change has been the move from the Las Vegas Convention Center to the Sands Expo Center. For a show that is “of gaming, by gaming,” a casino location makes the most sense, and has received almost universal accolades.

I’ve been fortunate to be the conference consultant to G2E for the past 15 years, and selfishly believe that the educational element of the show is as important as the exhibit floor, if not more so. But conferences are changing, and this year, that change will be reflected in the education sessions at G2E. We’re excited about the new direction of the conference, and hope you agree.

But trade shows and conferences are changing and morphing in every industry. To stay ahead of the game, G2E needs to recognize the changes not only in the trade show business, but also in the gaming industry. What are the needs of the exhibitors and the attendees? How can G2E deliver that unforgettable and valuable experience that will enhance the professional life of every attendee? That’s the challenge, and the solution is to stay involved.