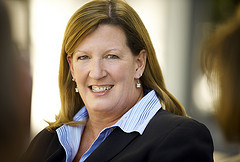 Isle of Capri Casinos, Inc. announced that Virginia McDowell has become chief executive officer of the company, in accordance with a previously announced executive transition process. McDowell currently is the president and chief operating officer; she will continue as president following the transition.

Both McDowell and Perry have signed new three-year contracts with Isle of Capri, effective April 25, the first day of the company’s 2012 fiscal year. The company still is searching for a new chief operating officer and expects to fill the position by the summer.

A 30-year veteran of the casino industry, McDowell joined Isle of Capri as president and chief operating officer in July 2007. She previously served in executive positions with Argosy Gaming, Trump Entertainment Resorts and the Tropicana in Atlantic City.

“We are concluding a fiscal year full of accomplishment,” McDowell said. “We have improved our capital structure, continued to improve our operations and recently broke ground on our exciting new project in Cape Girardeau, Missouri. With our stronger balance sheet, upcoming growth, dedicated team and a solid strategic plan, I am excited about the opportunities in store for the future of Isle of Capri.”