Aided by new technology and a huge new market in New York, sportsbooks are expanding to offer a wide variety of wagers 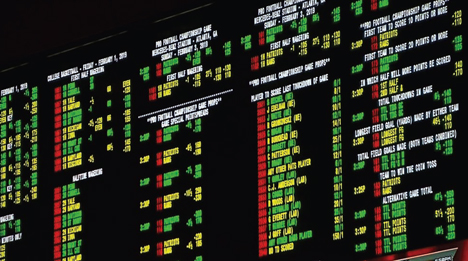 The heyday lives on.

Legalized sports betting, hailed as a lucrative wild card in the online gaming landscape, maintains its prestige. The gambling surge forecast by the 2018 repeal of the Professional and Amateur Sports Protection Act roars above expectations as 2021 concludes.

Bettors, the gaming industry and state budgets relish this new revenue source. Since 2018, American gamblers have wagered roughly $75 billion, and have created about $5 billion in revenues and nearly $750 million in state taxes, according to industry estimates.

In an eye-opening milestone, New Jersey’s record handle surpassing $1 billion in online wagering in September enhances the sports-betting mystique. Optimism won’t slow any time soon. The sports-gambling expansion, in a football sense, still hasn’t hit midfield. There is at least a couple of years left in this run, as states scramble to implement their new cash cow.

Arizona, Connecticut, Virginia and Louisiana highlight the 2021 expansion. Highly populated New York expects to become operational before the Super Bowl in 2022 and California may be a year or so away.

States, gaming operators and vendors closely watch two significant startup periods, the Super Bowl in February and the launch of product before the next NFL season kicks off. Catching these two heavily bet segments of the pro football season are paramount.

Here’s an overview from several vantage points of the sports-betting landscape after a lucrative 2021.

Stakes continued to be raised.

New Jersey handled a total $1.01 billion in sports betting in September, becoming the first state in the U.S. to surpass the $1 billion mark and breaking the previous record it had set in December last year, according to the New Jersey Division of Gaming Enforcement.

A billion plus. Billion with a B.

These totals dwarfed initial expectations accompanying the PASPA overturn in two major areas. One, the sports-betting pioneers who overcame decades of obstacles and hypocrisy from the professional sports leagues argued in favor of brick-and-mortar sportsbooks. They couldn’t envision what came next.

In the midst of that battle, mobile betting became a monstrous presence. And it redefined the capabilities of sports wagering. Handle skyrocketed.

Of New Jersey’s $1.01 billion, online sports wagering handled the lion’s share of $918.4 million, and on-site wagering at nine casinos and three racetracks handled $92.7 million in the month of September, according to the DGE.

Second, nobody projected the amount of money freed from the hammerlock of illegal bookmakers. Sportsbooks have something the illegal operators don’t—huge cash reservoirs. That has enticed bettors to employ practices they could not with an illegal operator, like leveraging a multi-legged parlay.

Players may take a $1,000, 10-legged parlay that would pay off in hundreds of thousands of dollars with an established book, because the establishment will pay the bet. An illegal bookmaker with limited cash reserves either would not take or would not pay this type of wager.

This dynamic curtailed certain types of betting and under-estimations of the true revenues legal books could seize away from illegal establishments. Sports-betting money flows in ways few anticipated. And even those who anticipate trouble with New York’s horrific tax structure lined up to apply for a license.

It enlivens the betting product, at online books or on one’s television. Implied win probabilities. Which team will score the next touchdown. The second half over/under of 24 points has -110 betting odds on either side.

These are just some of the data points placed across the bottom of a television screen.

This in turn drives interest and revenue in a key area of sports wagering. In the past year, industry officials estimate that the presence of in-game betting has skyrocketed, from 10 percent to 25 percent.

What enables this phenomenon? Odds that change after every baseball at-bat, basketball hoop or a couple of plays run in a football game. More jurisdictions mean more operators, more bettors and more need for the statistical kindling building the betting fire.

A Product to Watch: Game Parlay 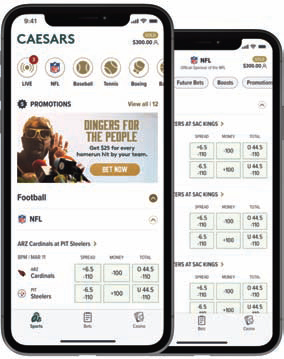 Launched just before the NFL season, Game Parlay from Kambi has been a hit with bettors.

What sets the Game Parlay offering apart from those offered by other leading sportsbooks is the fact it has been built into the core of the company’s sportsbook product, company officials say.

It’s the next natural step in the evolution of parlay betting, providing bettors with the opportunity to combine main and player prop bets within a single game and across multiple games for the first time.

“We knew that we needed to deliver an integrated and intuitive experience for our partners and their customers alike to get the most from the product,” a spokesman says. The fact that Kambi built the technical infrastructure required as part of the existing sportsbook, rather than bolting on a third-party product, means that the company will be able to add future product features.

“For example, players will soon be able to place game parlays across additional games, leagues and sports, while in the long term we also plan to introduce cash out and in-game betting into the product,” a company official indicates.

One of the key factors in being able to offer these parlays is the complexity of the mathematical modeling required, Kambi officials indicate. The company asserts that automating the systems required to accurately predict the correlation between many different outcomes and game scenarios is structurally challenging. This process also requires extensive expertise, along with resources for testing and development.

“When there is an effectively infinite number of bets that could be created, the power required to swiftly generate those prices, take and settle thousands of these bets a minute is naturally vast, and not something many sportsbooks are capable of catering to,” an official says.

Kambi just hit its own same-game parlay—a New York mobile-wagering license to utilize with some of its partners. The company was a huge winner in the New York State Gaming Commission’s (NYSGC) November 8 decision to grant mobile sports betting licenses to the major sports-betting establishments.

Sportsbooks teamed up to submit bids and two consortiums were selected. One involved DraftKings, FanDuel, Bally Sports and BetMGM.

Kambi headlined the other, which included PointsBet, Caesars, WynnBet and ResortsWorld. Kambi Group submitted the applications for the others, and will interact with them in areas like technology integration, generating tickets and keeping records.

The state hopes to be operating before the Super Bowl. Regardless of the 2022 timing, Kambi has established a 10-year position, with several partners.

According to a Kambi press release, the New York commission confirmed that a consortium led by Kambi as the primary applicant had been successful in its bid following a competitive request-for-applications process in which it achieved the highest score.

With a population of more than 20 million, New York is the most populous state to regulate online sports wagering to date, and will enable Kambi to further extend its footprint in the growing U.S. sports wagering market.

“I’m proud Kambi has been selected as a recipient of a Mobile Sports Wagering Platform license in New York State,” says Kristian Nylén, Kambi chief executive officer. “The confirmation from the NYSGC marks a major milestone in the evolution of the U.S. sports betting market, of which Kambi has been at the forefront since taking the first legal online wager in 2018.

“Kambi has proven time and time again that we know what it takes to succeed in some of the world’s most competitive sports wagering markets,” he adds. “Therefore, we are confident our mobile sportsbook will be just as popular with New Yorkers as our on-property product, which has been live in the state for the past two years.”

One of Kambi’s partners is Rush Street Interactive, which also operates an on-property sportsbook at Rivers Casino and Resort in Schenectady, New York, where it took the first legal on-property bet in the state in 2019. “To obtain one of the few licenses on offer in New York state is testament to Kambi’s exemplary track record in the U.S., as well the strength of our partner Rush Street Interactive,” says Sarah Robertson, Kambi’s vice president of sales.

“Preparations are already well advanced to ensure we are able to go live on day one of the market opening, as we have done so successfully on many occasions in the United States and across the rest of the world.”

Kambi is already a leading B2B sport-betting platform in both online and on-property sportsbook functions. It provides the technology and services required to deliver a scalable and high-performance sportsbook.

Kambi takes care of the day-to-day operation of the sportsbook so operators don’t have to. From pricing and risk management to integrity monitoring and customer services support, Kambi has it covered.

Removing this essential but burdensome work provides operators with the freedom to focus on strategic planning and execution, and on the areas which provide true differentiation.

The New York partnership with Kambi, meanwhile, is another strong development for Rush Street Interactive, a leading online sports betting and casino company in the United States.

In early November, the company announced that its award-winning BetRivers online sportsbook is fully launched in Arizona. Sports fans age 21 and over can now register, deposit funds, wager, and withdraw payouts quickly and securely from the BetRivers Sportsbook app for iOS and Android.

In August, RSI announced a multi-year market access partnership with the Arizona Rattlers, a long-tenured professional indoor football franchise in Phoenix. The Arizona Rattlers are one of the most accomplished professional sports teams in Arizona, and are coming off a successful 2021 season where the team advanced to the Indoor Football League’s championship game, the United Bowl.

Caesars also lauded its entry into the Empire State.

Caesars Entertainment has already established itself as a premier gaming operator in the tristate area, through its retail casino and sportsbook footprint, including the company’s state-of-the-art retail sportsbooks at the Oneida Nation’s three casino properties.

When mobile sports betting becomes available in the Empire State, fans will be able to earn credits and tier status to unlock incredible experiences through Caesars Rewards.

Additionally, through its unparalleled partnerships with the National Football League, ESPN, CBS Sports and more, Caesars looks forward to delivering an elevated experience for sports fans in New York.

Caesars Sportsbook is live in 20 states and jurisdictions—14 of which are mobile—and operates the largest number of retail sportsbooks across the country.

The mobile app offers expansive wagering options, including live in-game betting, as well as safe and easy ways to deposit and withdraw funds. Caesars Sportsbook is the official casino sponsor and an official sports betting partner of the NFL, and has partnerships with the NBA, NHL, MLB and more than 20 individual teams across the country while being the exclusive odds provider for ESPN and CBS Sports.

The big hitters are lining up in the Empire State. They have weighed the population of New York and the betting appetite of the nation’s largest city against the drawbacks of a loathsome tax rate.

New York won’t be the last state to generate this type of euphoria. The sports-betting movement has a long way to go.