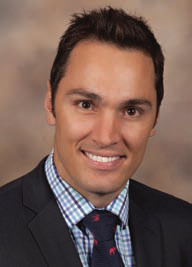 Matt Wilson was promoted to managing director of Aristocrat Americas in March. His promotion continues a 13-year career at the Australian slot giant that has seen him progress through the marketing and sales disciplines. He spoke with GGB Publisher Roger Gros at the Aristocrat headquarters in Las Vegas in April.

GGB: You’re not the only new promotion at Aristocrat. You’ve got a new CEO in Trevor Coker, a new chief technology officer, and several other positions. How will you continue the momentum started with former CEO Jamie Odell?

Wilson: Continuity is key for us. In a lot of ways, Trevor is an extension of Jamie. He’s been with the organization for nine years and came over with Jamie from Fosters. He’s been part of the turnaround story. We want to maintain the focus on our people and our culture, which is the reason for our success. So that’s our main focus going forward. We’ve had some changes, for sure, but our strength is still in place. Rich Schneider, who runs our product division, is still in place, as are most of our talented game designers. For me, inheriting a business that is performing incredibly well means not getting complacent, and that’s not going to happen.

You’ve just introduced the new RELM cabinet and reel-spinning products. How are you developing the spinning-reel genre?

We want to make sure we do it right. This product came about through the capabilities we acquired with VGT. They’ve got over 20,000 spinning reels on casino floors across North America and they build the industry-leading stepper product. We’re leveraging that success and attacking it on multiple fronts. It’s working very well on the low-denom product, and now we’re moving up to the high-denoms. Just after the summer we’ll be entering the high-denom, recurring-revenue stepper category. Our customers have been very supportive of this move. They’re asking for a little more competition in this category.

Tell us about the new Dragon Link.

That’s going to be coming out this summer also. It’s the follow-up to our tremendously successful Lightning Link. Dragon Link is already beating Lightning Link in Australia, where it’s already been launched. It’s on premium packaging and the Arc cabinet that will continue our momentum in that area.

How do you work closely with VGT?

We like to think it’s the most successful of that wave of Class II acquisitions that happened about three or four years ago. It’s really a marriage of capabilities and core values. Their values actually mimic our values. It’s exactly the same the way we approach our work. It was not only a great financial value, but it brought together two companies that had very complementary skill sets—a stepper, Class II company combined with a video game, Class III company.

What is Aristocrat’s strategy on skill games?

Our industry needs innovative pioneers like GameCo and Gamblit. It’s often the little guys that take the initiative, and congratulations to them. We’re spending a lot of our time on incremental adjacencies like VLT, Class II video, steppers and the like. We’re spending a lot of time getting into those markets and giving our customers value. But we have a responsibility to move our industry forward, and we’re looking to get more active in that space. We have a program internally called “Think Bigger” that encourages innovation outside the traditional space. We’re watching the segment very closely and trying to find the best way to enter the space.