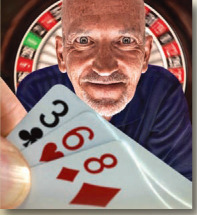 The gaming revenue numbers produced by casinos can’t be accomplished without doing the math. And that doesn’t mean adding up the dollars and dividing them by the taxation. That means making sure that every game, every table and every bet returns an advantage to the house. This is the bedrock of the casino gaming industry.

Robert Hannum literally wrote the book on the subject, Practical Casino Math. Hannum, professor of risk analysis and gaming in the Reiman School of Finance at the University of Denver, is also a consultant to casinos, as well as a widely quoted expert on the games. He says the house edge is inviolable.

According to Hannum, algebra, calculus and trigonometry are not the heart of the casino math.

“Casino executives should have some familiarity with basic ideas of probability and statistics. These are the most important tools you use to analyze the games,” he says.

Too often, casino executives act before considering the statistical implications of their decisions. For example, when infamous blackjack player Don Johnson approached several Atlantic City casinos in 2013, he was able to walk away with millions because casino executives didn’t truly understand the power of probability.

Hannum says a time requirement should be included when making deals with high rollers like Johnson, who also played craps, a game which requires no skill whatsoever.

“If you can get them to play a certain amount of time, you’ve got a much better chance to get ahead of the game,” he says, but when a customer can leave as soon as he gets ahead, it defeats the purpose of any deal the casino has made with the player.

“This is similar to deciding how much to comp a regular player,” he explains. “You need to run through the numbers and decide if you’re going to refund X percentage or give a certain level of comps that doesn’t swing the house edge to the player’s advantage.”

Slot machines are heavily dependent upon math, as well. The math used to determine payouts is often a crucial factor in the popularity of a specific slot game.

“It depends upon the behavior of a machine,” he says. “In some of them, the hit frequency is high—lots of small payouts. In others, there are fewer but larger jackpots. It depends upon what individual players like.”

The rising hold percentage at slot machines, documented many times in GGB and in a recent study by the Association of Gaming Equipment Manufacturers, has had an impact on play, according to Hannum.

“It’s like when the casinos went from 3-2 payout on blackjack to 6-5 payout,” he says. “That’s a huge difference in favor of the house. The same is true with boosting the hold percentage on slot machines. The players know it and don’t like it.”

Using table game or slot bonuses as promotions is generally a bad idea as well, says Hannum, unless the casino does the math before implementation.

“Something as simple as changing the payout on a natural blackjack of some combination to 2-1 and some cases 3-1, without changing any other rules of the game, can give the player a big edge,” he says. Giving too much cash back on slot play can also result in a player advantage.

To prevent that kind of exposure, Hannum says casinos should educate the staff on the basics of casino math.

“A certain familiarity on the part of the staff with the math involved would make sense,” he says. “They don’t have to have a thorough understanding, but should understand the basics.”

He says casinos should consult with a mathematician before implementing any rules changes.

“Whoever is in charge of the casino should tap into the expertise of a mathematician or a statistics expert,” he says. “Maybe even put one on retainer to make sure that you’re always on firm ground when making decisions based on math.”