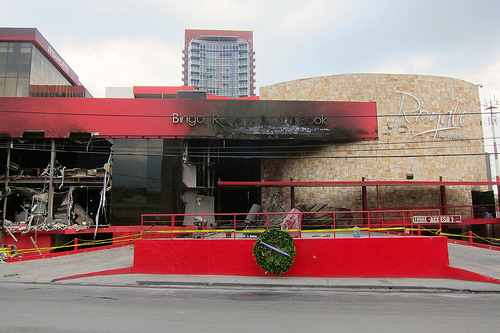 Last August 25, in a truly horrendous act, heavily armed purported members of Mexico’s Los Zetas crime organization swept into the Casino Royale in Monterrey, Nuevo León, doused the interior with gasoline, and set the building on fire. The gaming establishment was open at the time, and scores of people were trapped inside as the main entryway was ablaze, and the emergency and/or secondary exit doors were impassable.

When the smoke finally cleared, the death toll was 52 patrons and employees with others injured in an inferno that Monterrey sources say was a retaliatory message due to the Casino Royale’s owner and operators’ failure to pay weekly “protection” fees of about US$10,000 to the extortionists.

The assault has made headlines ever since, and well may have consequences that reach far beyond criminal investigations and arrests, judicial proceedings, and subsequent punishment.

On top of the attack and resulting law enforcement activities, the subsequent political reverberations will have long-lasting effects in Mexico. As well, all this might finally bring about real reforms to the archaic Federal Gaming and Raffles Law of 1947.

The Mexican government over the years, through its Interior Ministry, has issued a total of 27 master gaming permits that are in effect for multiple establishments, with the permit holders currently operating 318 betting centers and/or parlors (as of September 15) out of a maximum possible 561 throughout the United Mexican States.

Popularly known as casinos, they operate under two types of permits: one for “remote betting centers,” books for betting on offsite activities; and the other for numbers parlors, with “electronic terminals”—Class II gaming machines. A number of the accredited casinos use two permits, with each covering one of the spheres of activity and thus giving patrons a greater selection of games and video machines.

However, according to the Federal Gaming and Raffles Law, only “chess, checkers, and similar games; dominoes, dice and bowling; all ball games; foot races and animal races; sports; and raffles or drawings” are allowed. This in an article that states, in conclusion: “Games not specified will be deemed as prohibited as to the validity of this Law.”

Still, a subsequent article grants exceptions, allowing the federal government to authorize, regulate, control and oversee gaming when wagers are placed. And the Regulation for the Federal Gaming and Raffles Law, issued in 2004, further encroaches on constitutionally questionable areas with some allowances insofar as a law has superiority over a regulation.

These issues are germane in that many of the so-called legal casinos in Mexico have been operating with equipment or added games that fall outside the law—roulette, slot machines and certain unauthorized card games being examples—and the Casino Royale is one of those suspected of operating unauthorized games and machines.

(One source noted that following the Casino Royale incident, permit-holding casino operators throughout Mexico quickly saw to the disappearance of any and all unlawful activities and equipment.)

“For some there are certain little machines, or those that are called slot machines, (and) cards or card games, that supposedly cannot be regularized,” Blake said. “For us, as we have indicated, there is no condition under the law or the regulations that can justify that situation, thus we are going to check on how many of these kinds of establishments that they say cannot be regularized there are, (that) in our judgment would clearly be outside of the regulation and the norm, and therefore we would have to close them.”

Days later, Blake added, “We are going to regulate the industry (and we will) not issue more permits… And, if in the inspection and vigilance it is found that they are operating illegal gaming because they do not have permits, or they are conducting activities that the law prohibits, they will not only be closed but sanctioned with the full force of criminal law.”

It should also be noted that each “electronic terminal” must have its own certification, yet the private-sector Electronic Normalization and Certification Association claims 95 percent of the machines in Mexican casinos are not licensed.

Furthermore, each imported machine must have a Mexican Customs authorization.

Following the Casino Royale tragedy, a Special Investigative Commission was established in Nuevo León, which has already determined that Roberto Correa Méndez, the ex-director of gaming and raffles in the Interior Ministry, granted 41 federal expansion permits to the Atracciones y Emociones Vallarta company on June 10, 2009, and 24 hours later he resigned.

One of those permits was for the company’s Casino Royale, which had already been in operation for two years in Monterrey. Furthermore, according to a commission spokesman, there are irregularities in all 41 expansion permits.

Actually, the Adjunct Directorate General of Gaming and Raffles has been under investigation for some time, this having come to light last June following the raid on the Tijuana home of Mexico’s Caliente Race, Sports Books and Bingo Parlor magnate Jorge Hank Rhon, and his short-lived incarceration. According to the Mexico City daily La Jornada, the Interior Ministry had ordered an inspection and audit of the Adjunct Directorate to review the permit issuance processes, and—supposedly—“not to investigate one of the permit holders, businessman Jorge Hank Rhon, accused by the Attorney General of the Republic of stockpiling weapons.”

While the federal government, which holds jurisdiction over all gaming in Mexico, has authorized up to 561 centers and parlors, when clandestine operations are added to the mix the total number may exceed 5,000 establishments. According to the Citizen’s Strategic Studies Institute (Incide), whereas in 2004 there were an estimated 1,500 clandestine casinos in Mexico, the guess is there are more than 5,000 today.

Also without permits, there are said to be 70,000 to 75,000 illegal slot machines, known as “street casinos,” in grocery markets, pharmacies, refreshment stands, kiosks, outside schools, etc.

After the Monterrey violence, the owner of the Casino Royale, Raúl Rocha Cantú, quickly fled, and soon thereafter the Nuevo León attorney general’s office issued an order for him to appear to make a statement regarding the attack.

Tracked down in the United States, in Florida, Rocha gave a statement to an attaché of the federal attorney general’s office, the Spanish news service EFE reported. Without knowing details in the statement, speculation is that in part it centered on what Rocha said in a letter sent to the Monterrey newspaper El Norte in early September, indicating, “he said he fled the country because he feared the criminals who attacked his business.”

Almost immediately after August 25, political charges and countercharges started—allegations of corruption that hit fever pitch when videos surfaced of Manuel Jonás Larrazabal receiving wads of money from casino operators. Jonás is the brother of Fernando Larrazabal, the mayor of Monterrey, who is a member of Mexico’s ruling National Action Party, or PAN.

An image published by the Mexico City daily Reforma showed Jonás receiving a bundle of cash estimated at US$32,000. Reforma also reported that Jonás had collected money from at least three casinos prior to August 25, money that some think may be associated with extortion that, part and parcel, is connected with the proliferation of casinos in Monterrey, or maybe money laundering, the two possible reasons for the Casino Royale attack if you listen to the vox populi.

Jonás, who was arrested, said the money was for Oaxaca cheese he sells to casinos.

There were immediate calls for Fernando Larrazabal, who by all accounts was (and maybe still is) at the start of a promising PAN political career, to step down—at least temporarily—while matters were investigated. An investigation would include probes to see if not only organized gangsters were strong-arming money from casinos, but maybe also extortionists tied to officials or the mayor.

The mayor, however, refused to stand aside, and he ultimately weathered the storm.

The PAN asked Rodrigo Medina de la Cruz, the Institutional Revolutionary Party (PRI) governor of Nuevo León, to step down temporarily while police investigated the arson and the casino corruption scandal, according to AP. But Medina also refused to take a leave of absence.

In exacerbated silliness that might be laughable if things were not so tragic, the PAN and the PRI then began to further politicize issues. It appears to be occuring, insofar as the parties are in the run-up to the 2012 presidential and congressional elections. The PRI pointed the finger of blame at the PAN mayor, whereas the PAN seemingly tried to retaliate with its call for the governor to stand aside temporarily. But in Nuevo León, the PRI seemed to have the advantage.

So, while it seems a stretch, according to some pundits, local politicians in the northwestern state of Baja California jumped into the fray. Taking the lead, PAN members of the state legislature publicized charges that the son of the PRI mayor of Ensenada had received a questionable check for US$2 million from San Diego-based Sempra Energy, for unknown purposes. The payment was apparently made by Sempra, although the company has denied any wrongdoing.

Pressing on, the state deputies have been trying to force Ensenada Mayor Enrique Pelayo Torres to appear before the Baja California Chamber of Deputies to explain the payment to his son, which—whether it was on the up-and-up or not—the hullabaloo has made look like a corrupt act. This, as the aforementioned media pundits suggest, was a payoff to keep the mayor from trying again to close Sempra’s natural gas facility, Energía Costa Azul, located in the municipality of Ensenada, as the mayor had tried to do last February when he charged Sempra with “irregularities and flagrant violations to the law.”

All of this, today and by extension, is supposedly to damage a PRI mayor (in Baja California), whose son received money from an energy-sector foreign company, while the PRI attacks the PAN mayor in Monterrey, where his brother made money from casino businesses. Local carryings-on and charges of extortion will help shape national politics as the 2012 campaigns heat up (next year’s federal elections will take place on July 1).

Even though the Mexican government and the legislature have entered their lame duck periods, the Casino Royale case could still bring about some actions.

The Chamber of Deputies of Nuevo León began hearings on October 4, to further analyze the Casino Royale Special Investigative Commission’s work and to call officials and others to testify, and to take those actions that are within the purview of a state legislature.

The Nuevo León state government has also asked the federal government to form a joint task force to address matters of casinos, their operations and possible irregularities in the state.

Moreover, the Mexican Senate is calling on the federal government to instruct the Interior Ministry to establish coordination mechanisms with state and municipal governments to ensure compliance with civil protection regulations during activities that include gaming and raffles.

A Senate bill has also been introduced that seeks to create a Federal Law for the Prevention and Treatment of Compulsive Gambling and the Promotion of Responsible Gaming.

And there is talk about the need at long last to reform the Federal Gaming and Raffles Law of 1947. Yet, draft legislation has been gathering dust in the federal Chamber of Deputies for over a decade, where recalcitrant and basically indolent members of Congress have kept the initiatives in committee.